Directed by Patrick Pearson and written by Matthew Capodicasa, The City Of . . . is an ambitious work self-described as inspired by the metaphysical wrestlings of Jorge Luis Borges, one of several mid-20th-century writers who articulated a world seemingly emptied of meaning and truth. Borges would witness the atrocities of the Second World War and the Holocaust, only to see them followed by a sort of defensive, if not indifferent, mass amnesia, a behavioral pattern that continues to our present day. 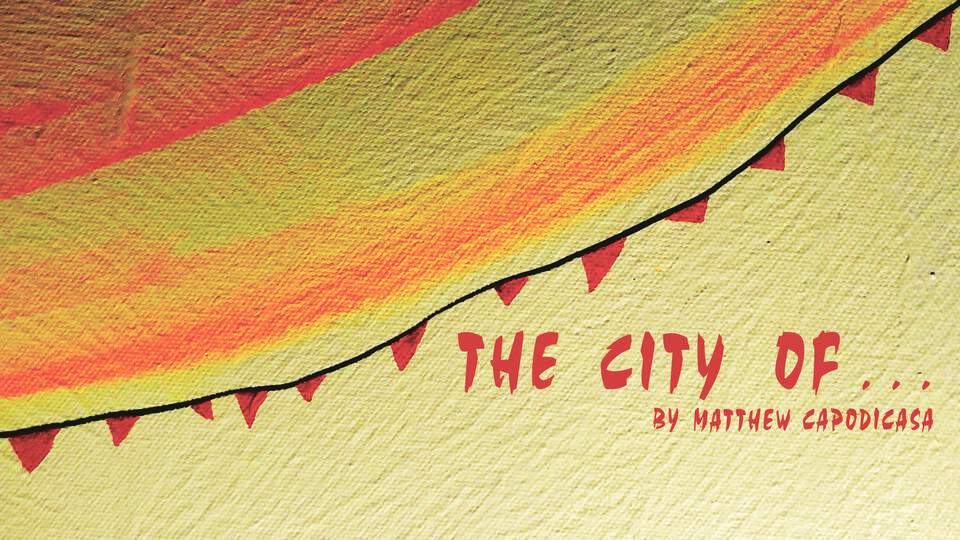 The City Of . . . follows Irene (Yesenia Iglesia) and Arthur (Nicklas Aliff), a married couple struggling not to forget each other in a city that has fallen plague to widespread memory loss, where swaths of people roam the streets aimlessly, unable to make sense of who and where they are, and what they are supposed to be doing.

The couple encounters a man, Z (Scott Sedar), who supposedly remembers everything, recollecting even the most meticulous and insignificant observations. As Irene and Arthur fight to remember bits of their identities, Z helps them find their way home, where they hope to forage for reminders of their lives together before escaping the city.

The City Of. . . has didactic ends, reminding us in different ways how spotty memories and the privilege of only some “rememberers” creates flawed, sometimes irresponsible preservations of history. Yet this message feels diluted and out of focus, as the play devolves into a jam session riffing on the different cultural, emotional, and practical consequences of forgetting.

The drama is structured like an odyssey, where our three characters leave and return home, and in between have depressing, comical, and odd encounters that gesture at answers to questions like how identity is formed and how to recognize between fact and fiction.

The most compelling strand of the play, however, is Irene’s and Arthur’s relationship, a bitter reminder that love is only built up through time and effort, with a glimmer of hope like in the film Eternal Sunshine of the Spotless Mind. Their “memory exercises,” which consist of repeating aloud a list of facts about one another, are scattered throughout the play beautifully, evoking faith, hope, and eventually desperation, much like a compressed version of a once strong, now failing relationship.

Despite the long journey all around this nameless city, the performance is stripped to the bone, a bare stage containing no props or stage devices. Instead, the script makes inventive use of on-stage narration from the protagonists to move the action forward and create a vivid sense of place and movement.

Arthur at some point asks, “what is the process of making yourself remember?” a question that not so much needs a fancy response as it does a demonstration, which is done skillfully in certain stretches of dialog. The most memorable rendering of this is when Z fills in the blanks to Arthur’s monologue about domestic life with his own logical assumptions. Lighting was also used effectively to make quick shifts in mood that different spaces – trains, apartment buildings, parties – create.

I really never get tired of watching Yesenia Iglesias perform. This role in particular really made use of her distinct talent in capturing a sense of urgency. Sedar was well-cast as the enigmatic Z, but unfortunately, the character was written inconsistently, less a symbolically productive foil and more of a plot device. The play relies on Iglesias and Aliff to move back and forth from performing as Arthur and Irene to several other secondary characters they encounter, often in the same scene and interaction. Kudos to Aliff for making this work with his really wonderful voice transformations.