Shakespeare is alive and well at this year’s Fringe, and that includes both the usual adaptations and some of the more surprising spin-offs. 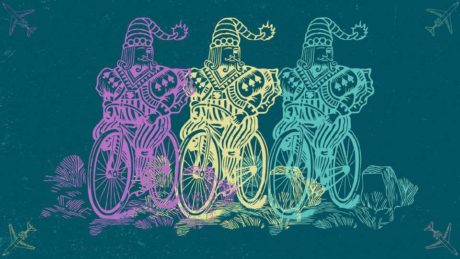 One of the most entertaining of the latter—qualifying as both a spin-off and a take-off–is The Tragical Comical Fool’s Game, a British import that opened during the first week of the festival at Christ United Methodist Church, one of several venues located in the Waterfront area.

This venture—an homage to Twelfth Night—opens with a prologue spoken by the Duke himself. Orsino, played by British actor Ed Loboda with suitably wry banter, quickly dons the persona of Feste, a bartending clown. He tends to his flock, a handful of passengers en route to Illyria but stranded in—of all places—an airport terminal. (Michael Kahn, take note).

One by one, the passengers are introduced. They all confront the vagaries of life, which include sex, marriage, money, the inevitability of death, the oblivion of booze and the nature of airport terminals.

The first to stumble up to the bar—and overpay for a modest margarita—is Tony, a gay sailor who is broken-hearted. The man he loves—and incidentally has just rescued from a drowning in a tempest-toss’d sea—has decided to go back to his wife. Naturally, Tony feels betrayed. He is played by Rob Leinheiser, an American actor who worked with Loboda in the UK.

Next up is Em, a bawdy woman—described in the program as a ‘slut’—who laughs at life. She is given a joyfully comic image by Madeleine Smith, a DC actor and director who loves the Bard.

Of course, not everyone sitting in a bar likes to drink. Bella, a wan young woman who has run away from home, is one of the abstainers.

Bella thinks she wants to be a nun. Nevertheless, she is pondering marriage, but whether this is because she has gotten pregnant, received a proposal—or both—we don’t know. Rosanna Thornwood does a lovely turn as the sad heroine.

Last on the roster—and the last to reveal why she’s waiting for this ill-destined ship—is Katie. Although played by Chloe Mikala, a DC actor with credits up the wazoo, the role itself is limited. Identified as “a raging bitch” in the program, Katie seems to be an observer. Hers is the voice of feminism, yet it doesn’t seem to register.

The Tragical Comical Fool’s Game was created by a team of actors at the Shakespeare Institute at Stratford-upon-Avon in the UK. Led by Loboda, who is clearly the playwright’s alter-ego, their ranks include Leinheiser, Thornwood and Susannah Morgan Eig, who directed this version.

While the humor is rough and the plot occasionally wobbly, Fool’s Game is an interesting look at what Shakespeare was up to. It also raises some age-old questions about storytelling.

Put another way, are we just characters— “mere mortals who strut and fret our hour upon the stage” –in someone else’s story? Who controls the outcome? And are shipwrecks inevitable?