The all-volunteer organization Hexagon, “DC’s only original political satirical musical comedy troupe,” has been around since 1955 and has long been a Fringe fan fave. Its signature productions are sketch-comedy-infused musical reviews featuring huge casts singing fresh songs that send up politicians, pop culture, and other skewerable topics of the day. Last year’s production, Hexagon 2017: Let Freedom Zing!, garnered the Fringe Audience Award for Best of Show. This year’s entry, Hexagon 2018: Tweet Land of Liberty—performed somewhat awkwardly in the chancel of a church—takes on the Tweeter in Chief with a fun futurist twist.

The premise of the show is that it’s taking place a century from now. A tourist husband-wife couple (Sandy Swan Guidera and Jim Guidera) drop in on the National Museum of American History where a museum guide (Jen Ayer Drake) shows them around an exhibit about the Trump era. There follow seventeen clever musical numbers threaded together by an amusing narrative that includes Trump firing his entire staff when he fails to win the Nobel Peace Prize and all the blue states seceding and annexing themselves to Canada (“Now that we’re part of Canada, we actually have safe gun laws!”). 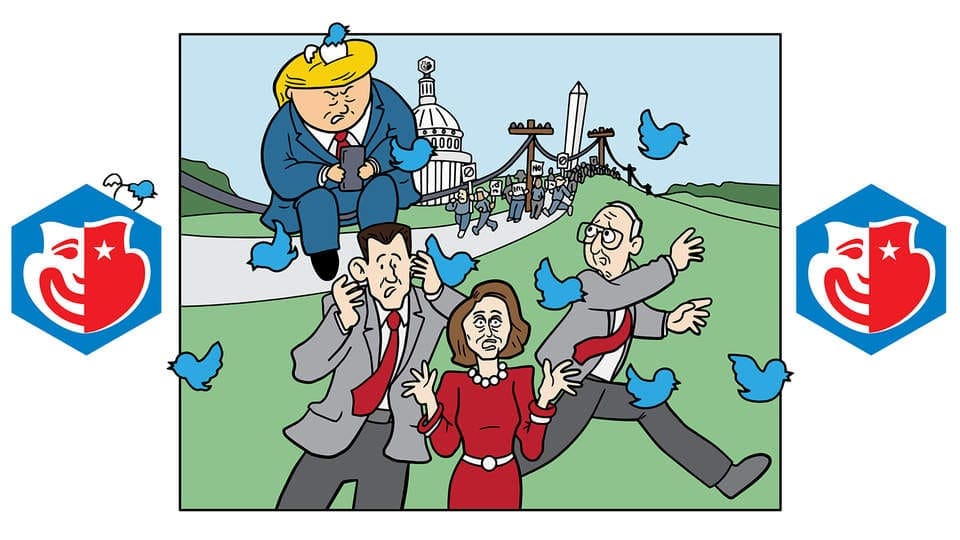 Trump’s various wives and offspring make appearances. “Good to Be a Trump,” sing the privileged kids Ivanka (Katherine Catalano), Don Jr. (Chris Gray), Tiffany (Ellen Kaplan), and Baron (Susan Dye). “Trump Wives Bake a Cake” is sung by a bewigged trio of the betrayed, Ivana (Katherine Catalano), Marla (Ellen Kaplan), and Melania (Susan Dye) (wearing an apron that reads: “I really don’t bake. Do u?”). Trump’s most newsworthy dalliance gets her comeuppance on “Stormy” (Jackie Williams). And we learn that Paul Ryan (Chris Gray) (“a medical wonder for being spineless and gutless”), foreseeing a midterm blue tidal wave, up and quits—offering the lame excuse that he’s “Spending More Time” with his family.

One of the sharpest sketches pillories Hillary: In a number called “What Happened” (per the title of Clinton’s recent book), the candidate (Susan Dye) and a chorus of pantsuited supporters catalog all the reasons she lost (throwing in some funny sci-fi ones), to which she keeps singing the refrain “It’s not my fault!”

Among other boldface names to pop up is perjurer George Papadopoulos (Matthew Jeffers), who in “Cause I’m Drinkin'” explains, “I should have shut my trap but I was drinkin’.” And prevaricator Sarah Huckabee (Cristen Stephansky), who in a hilarious press conference bit keeps getting interrupted by texts that contradict what she just said.

This crowd obviously not being Trump’s base, there were a good many cheers when partisan points were scored (“This is so much worse than Watergate!”)

Supplementing the Trump-era focus on politicos, the show includes some other pop phenoms: TV talk shows get a roasting in “Blah Blah.” The Metro gets railed at in “Colors Don’t Run.” And online dating and sexting are taken a swipe at in “Mr. Whiskers” (sung by Karin Rosnizeck to a cat).

A few topics are treated semi-seriously, as in a number called “Times Up” when a chorus of women (wearing #TimesUp Ts) sit the tourist hubby down and set him straight. The moral of the number: “Raise your boys to be respectful men.”

To the tune of “Twinkle Twinkle Little Star” are sung the lyrics now used in schools to teach kids about lockdowns. And politicians’ nostrums offered after shootings are shamed in “Thoughts & Prayers” (“To the victims of this tragedy we send our…”).

One misfire was a sketch lampooning contemporary advocacy of affirmative consent to engage in sexual activity. A man and woman are on a date. They each have a lawyer. For each advance in their affection—a hand hold, an eye gaze—the attorneys whip out a piece paper and tell the daters to “Sign the Form.” Besides being unfunny, the sketch in its cynical substance reversed what was achieved in “Times Up.”

There were technical glitches on opening night. The performance was delayed while efforts were made to get a Powerpoint to work. It never did, so the show just went on. The wireless mics, worn by some but not all, functioned erratically. As a result the wit in the lyrics—which from what was audible was impressive—didn’t come through even to the front rows of the vast nave. No doubt these issues will lessen once the show finds surer footing in this challenging venue.

Hexagon is a labor of love that over the years has raised millions of dollars for charity, so the troupe’s generosity can be considered its true talent in the sense of the biblical parable.

Taking that into account, the all-ensemble finale, “I Am America,” was surprisingly moving. Its patriotism seemed genuine, not cheap sentiment. It was a fitting and powerful communal closure to an evening full of reminders of how this “tweet land of liberty” has fallen short: “We are Americans here, like it or not.”

Hexagon 2018: Tweet Land of Liberty plays through July 28, 2018, at Westminster Presbyterian Church, 400 I St SW, Washington, DC. For tickets, buy them at the venue, or purchase them online.