Church basements have a long and surprisingly illustrious history in the evolution of modern dance, particularly in the mid-20th-century when they were creative strongholds for iconoclastic choreographers. But at the turn of the 20th century, when modern dance was in its infancy, the salons, gardens, and living rooms of wealthy arts patrons provided venues for modern dance’s founding mother, Isadora Duncan. The basement of the Christ United Methodist Church in Southwest Washington, DC, unadorned and utilitarian, felt imbued with a soulful spirit of ecstatic dancer Isadora Duncan, who adored Chopin and frequently danced to his heartfelt compositions. 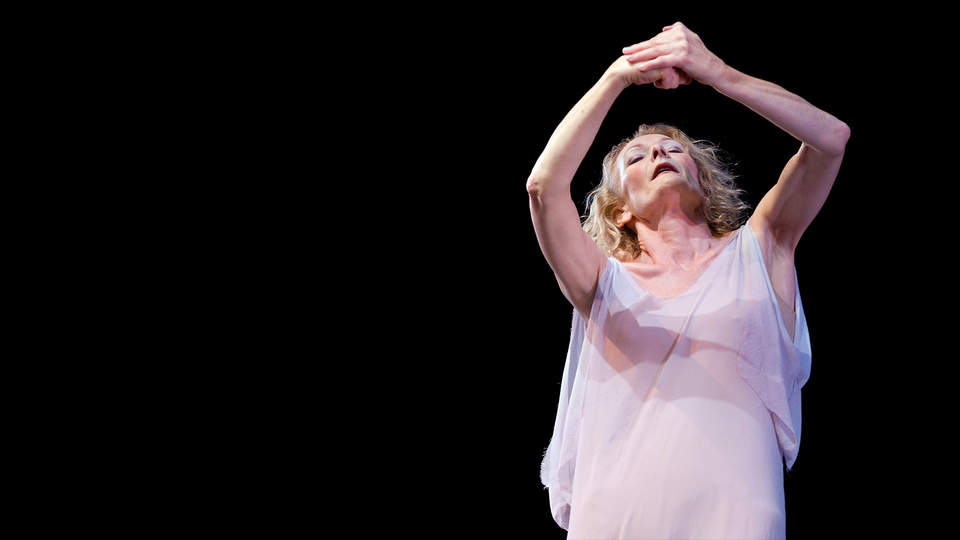 Isadora Duncan: Landscapes of the Soul collects Duncan’s 24 dances to Chopin’s piano pieces – some shorter than a minute, others more substantial and recognizable. These Duncan works have not been performed together since 1949, but under the direction of Cynthia Word and her eponymous Word Dance Theater, she has given life to these works once more.

The Duncan history was thought to be nearly lost for many years following Duncan’s tragic and dramatic death (look it up), but her acolytes—young dancers she trained and developed into a performing ensemble she called “the Isadorables”—preserved and passed along her choreography. These days Duncan’s dances are experiencing a renaissance. In the Washington area, dancer/choreographer Cynthia Word has taken up the Duncan mantle and her troupe, Word Dance Theater, is a prime example of the inimitable soul-baring style the choreographer created.

For Landscapes of the Soul, Word, joined by pianist Carlos Rodrigues, intersperses these evocative dances with spoken passages culled from current headline-worthy news stories and Oprah Winfrey’s inspirational writing in The Wisdom of Sundays.

Word, draped in designer Judith Hansen’s silky pastel tunic, is a lushly, languorous mover and the intimate church space allows viewers to hear her breath, and observe her shifting emotional moods from playful to searching to pained and bereft. Details, like the brush of a hand, a tilt of her head, and quivering of her fingers color the movement and play with the emotive accompanying score.

Duncan believed the center of bodily movement was the solar plexus. Word animates her clavicle and sternum to convey the effective moments enlivened by her breath, ranging from shallow to diaphragmatic. Like a fine wine, Word has matured and her dancing features subtle shadings that deepen the choreographic journey she is taking in wondrously intense ways.

Joining Word, on Thursday, were fiery Jenifer Golden, whose stage engulfing skips, skitters and runs evoke outdoor open spaces, and Jordan Gehley, who conjures imagery of a mighty sorceress with her accurate musicality.

Word reclined on the floor in Grecian style recalling an iconic Duncan photo. Later she clasped hands beseeching then battered her clenched fists at unknown adversaries. As the preludes built toward their final wrenching chords, the three women danced in succession, leaping, spiraling and turning in near ecstatic reverie. Throughout, the spoken-word sections alluded to contemporary struggles—the loss of a teacher to gun violence, a witness to people dying in a refugee camp—and triumphs of the spirit.

While it might have made sense to use Duncan’s own words—she was a fairly prolific and poetic writer – Word has done that in prior productions. By tapping into the current news zeitgeist, Word allows Duncan’s work to become relevant in a new fashion, more than a century after it was created.

At the dawn of the 20th century, Duncan showed the world that women could not only dance but use their bodies as a medium to express the emotional ebbs and flows of the modern psyche. Duncan’s work continues to touch and move many for its fluidity, its power, its dynamism, and its unparalleled musicality. Landscapes of the Soul is an antidote for our current ugly moment in history, conveying viewers back to a time when expressive dance captured hearts and imaginations with innocence, drama, and charisma.

Running Time: 75 minutes including a brief Q and A, with no intermission