Marx in Soho is a one-man show written in 1999 by the late historian Howard Zinn. It was re-mounted by Iron Age Theatre for the Philadelphia Fringe Festival in 2004, produced and directed by John Doyle as a response to the Gulf War, and has been touring ever since.

It seems rumors of Marx’s death have been greatly exaggerated. In this amusing and powerful solo show, he comes back from heaven – ironically, a place he never believed in – to defend his life’s work and ideas. He is presented very sympathetically, as a family man, loving husband and father, scholar and revolutionary determined to make the world a better place for the common people. And he makes it clear that his ideas have never been more needed. The most wickedly effective conceit of this show is that Marx has been reading the papers – OUR papers – and he makes quite obvious that he doesn’t like what he sees. The show has been evolving to react to current events and place of performance ever since it started touring. (At this performance, all the actor has to do is hold up a newspaper with a picture of our current President. Words are hardly necessary).

John Doyle’s direction is masterful. He makes expert use of the plain space with a table and a few chairs and minimal props — a scarf that represents Marx’s wife, a bottle and glass of beer, and many books and papers —  to give his single actor multiple levels and to underscore what he’s saying.

The solo performer, Bob Weick, who has Marx’s beard and mien and captures his weary energy, transitions gracefully from anger to humor to wistful memory to pathos. Engaging directly with the audience, he vividly evokes his beloved wife and daughter, his friend Engels, his enemies, and his ideas. And engaging as his Marx is, this is not a hagiography. The man is sympathetic, but real, and full of regrets. Weick’s performance is a masterful, mesmerizing tour de force. 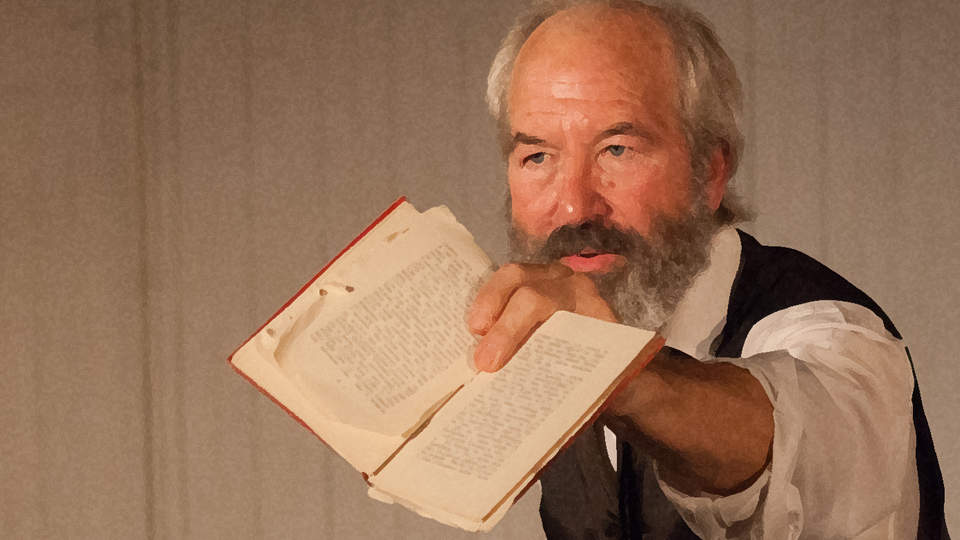 Marx in Soho has been commenting on what capitalism has become for 14 years. Now, at the 200th anniversary of Marx’s birth, and the 150th anniversary of the publication of Das Kapital, with income inequality soaring and capital being concentrated in fewer and fewer hands, its message is more crucial than ever.