I am so, so glad we’re finally talking about mental illness and suicide. According to the most recent CDC statistic, there are 800,000 suicides a year in the United States alone (that’s 123 people a day), and the numbers have increased exponentially over the last decade. I’d venture a guess that that’s probably a number higher than we’d like to admit.

We also know from some of the recent high-profile deaths that mental illness doesn’t discriminate between rich and poor, the famous or the unknown. Having some public analysis of the prominence of mental illness and suicide is great. However, I also know from my own experience with a family member’s suicide that there is a right way and a wrong way to discuss it, and in my opinion, the entertainment industry’s track record in doing so is not great. 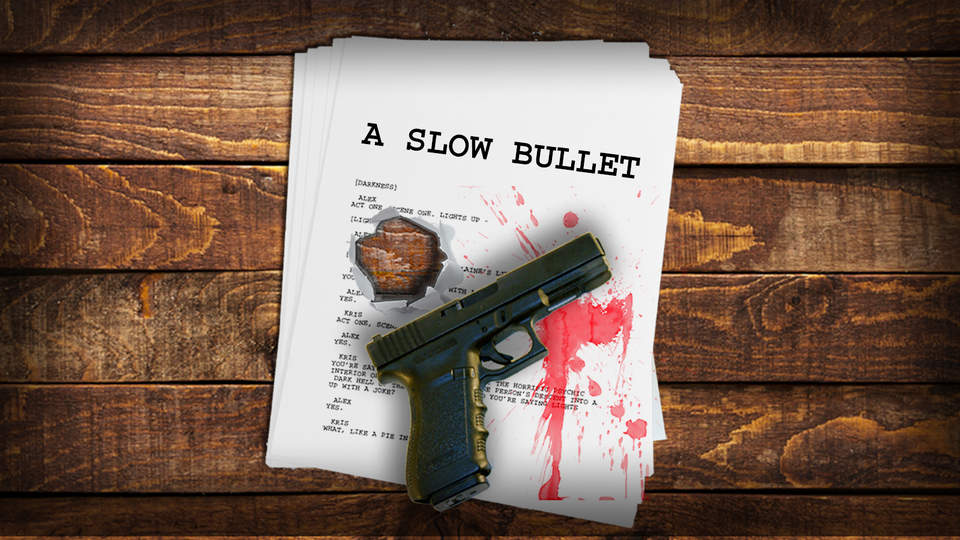 With their newest piece, A Slow Bullet, The Coil Project gets it right. This is a play that ultimately asks far more questions than it can answer, but that’s okay in this case because that’s what suicide is like, quite often, for the people left behind. And a lot of it is tenuous ground: are we allowed to joke about mental illness? Do the dead have rights? Do the living have a right to ignore the wishes of the dead? What if someone’s final wish is so extreme that disregarding it is the only way those left behind can help themselves feel better?

Writer and Director Erik Harrison and his excellent cast have given us a play that tries to address all of these questions, while ultimately showing how suicides change people, and asking what we must do to move on. The six actors all play best friends and members of a struggling theatre troupe, and in other hands, this concept runs the risk of being self-serving and heavy-handed, but Harrison’s script stays poignant and funny while also being deeply real.

There is the requisite gallows humor one might expect at a wake for someone you thought you knew intimately, and, of course, the meta-theater of actors playing actors. But there’s also the brave admission that sometimes people are really sick, and, despite all the signs, there truly may not have been anything anyone could have done.

The play is presented mostly in the present in the immediate aftermath of the suicide, with brief transitions into flashback (managed to great effect by Rich Fragiamore’s sound design). Michael Reilly plays Kris, a playwright who takes his own life and leaves behind his last play, interpreted by his friends as his suicide note, which he demanded they destroy if he ever died.

Alex (Andy De), who seems to be the unofficial leader of the group, wants to produce the play immediately for his own selfish reasons. He gets Laine (Erica Smith), the Mama Bear of the group, to force a vote on it. As the wake progresses, we learn that Morgan (Michael Silver), Sascha (Leanne Dinverno), and Jamie (Stacey Kruml) are being pushed to the breaking point with pent-up anger of their own.

All the actors in this are wonderful, but there are particularly beautiful moments from Erica Smith when she recites a list of “worst things” when she found the body. Andy De has a lovely moment when he suddenly shifts unexpectedly from gung-ho to distress about using theatre as a placeholder for anger and forces a vote on the play. As Sascha, Leanne Dinverno delivers a heartbreaking speech about her anger at being left behind.

When we talk about suicide, we often talk about how it’s “the easy way out.” A Slow Bullet is well up to the task of showing the stark reality of this kind of loss, and how it isn’t easy at all. At one moment after a breakdown, before he kills himself, Kris tells Laine, “Please, don’t let them see me naked.” But maybe, in order to heal, letting the people we love see us naked is exactly what we need. These are conversations that desperately need to happen. Seeing this play is a great start.

Running Time: 60 Minutes, with no intermission.