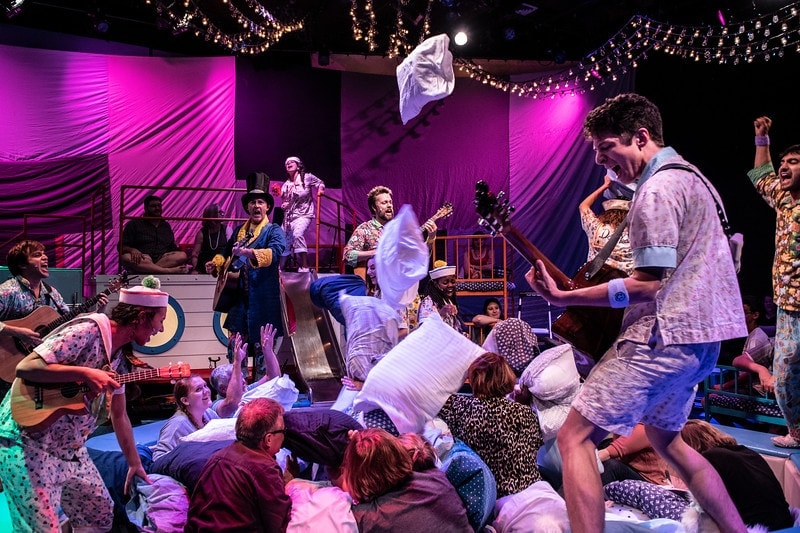 Something for everybody. That’s what comes to mind when I think about the Chicago-based The Hypocrites’ whiplash-inducing, gender-flipped spin on Gibert and Sullivan’s H.M.S. Pinafore.

Trying to describe the experience of this production, currently housed in the Mulitz-Gudelsky Theatre Lab at Olney Theatre Center, is a bit like trying to catch lightning in a bottle- so please bear with me.

The house opens the standard thirty minutes prior to the show. The moment you enter the performance space you are surrounded by company members gleefully banging out pop songs at top volume. They move deftly throughout the space with their instruments. It’s hard to resist the urge to sing along in an atmosphere that is so transcendentally infectious. I found that I, too, would walk 500 miles and I would walk 500 more, just to be the man who…well, you know the rest.

There is a pillow pit in the center of the performance space. Those who have promenade seating are encouraged to remove their shoes and join in. I admit, I couldn’t resist the urge. I spent the bulk of the pre-show covered in pillows and throwing stuffed cats at audience members, who would often catch them and toss them back. 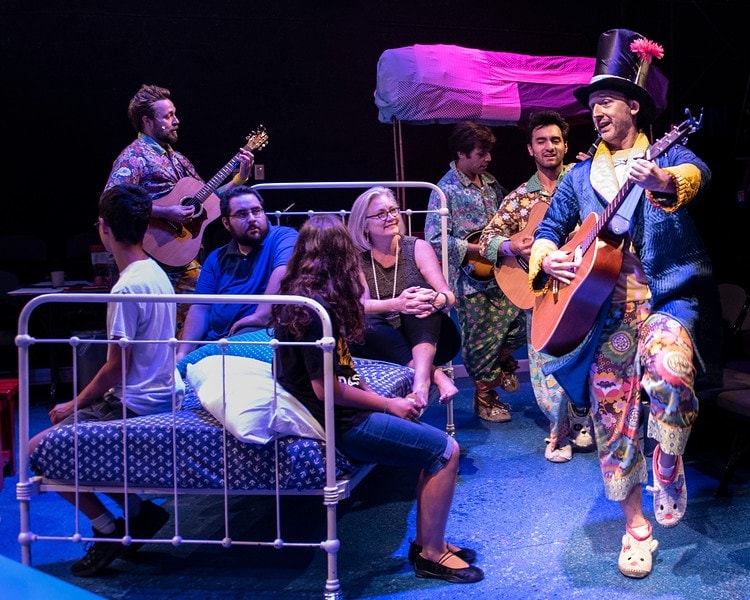 These elements make for a much-needed reminder of carefree childhood moments. The kids who attended the production spent most of their time in the pillow pit, or sliding down the slide at center stage, or climbing up various set pieces which doubled as seating. Being able to see and experience their joy is part of the fun.

Prior to the performance I retreated to a nearby bed (yes, you read that correctly) on which I sat through various parts of the show. While the kids will have an absolute blast at Pinafore, I would be remiss to leave out a main perk for the grown-ups: the bar, which serves a loaded “Pirate Punch” that is so strong you can smell it coming a good ten feet away. It is open throughout the duration of the show.

People are encouraged to move around in the space. It will likely be required of you if you have promenade seating. For those with mobility issues or who want to sit back and watch undisturbed, a seated ticket would be recommended. 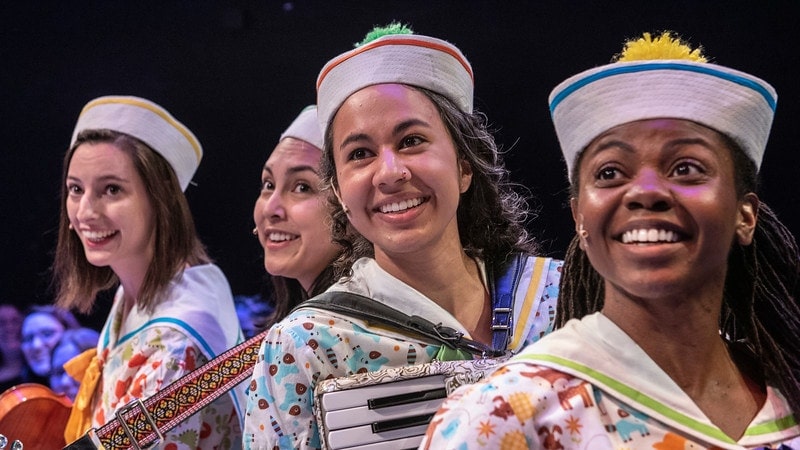 So here I am with my “Pirate Punch,” lounging on a bed and watching grown adults in pajamas sing Gilbert and Sullivan songs. It was, absolutely and without a doubt, one of the most unforgettable experiences I have ever had in a theater. We haven’t even touched on the actual production yet.

This H.M.S. Pinafore is an adaptation by Director Sean Graney, along with Andra Velis Simon and Matt Kahler, of the original Gilbert and Sullivan operetta. It functions as a sort of “greatest hits” version, with a liberal sprinkling of pop culture references throughout.

The main plot (gender-flipped, as I mentioned) follows the original fairly closely. We see Captain Cat (Tina Munoz Pandya) making a valiant attempt to marry her son Joseph (Mario Aivazian) to the Admiral Dame JoAnne (Lauren Vogel) in order to increase the family’s standing in society. The catch is that Joseph has fallen in love with a fresh recruit to the naval crew, Ralphina (Dana Saleh Omar). Despite Ralphina’s lowly social status, Joseph and Raphina are determined to be together.

It would be nearly impossible to convey the extreme talent of the cast, who I consider to be performing with an unmatched professionalism in the ever-changing environment of controlled chaos and pressure that is this performance space. They sing, they dance, they play instruments- and they really don’t miss a beat.

Highlights included Matt Kahler’s turn as Buttercup. The audience appreciated the inherent humor of such a large, hulking man wearing a pink granny nightgown and singing the evergreen classic, “I’m called Little Buttercup.” Laren Vogel, as Dame JoAnne, takes a successful crack at “When I was a lad”- skewering the interminable and endless nonsense of bureaucracy which allows the incompetent to ascend to such high ranks. 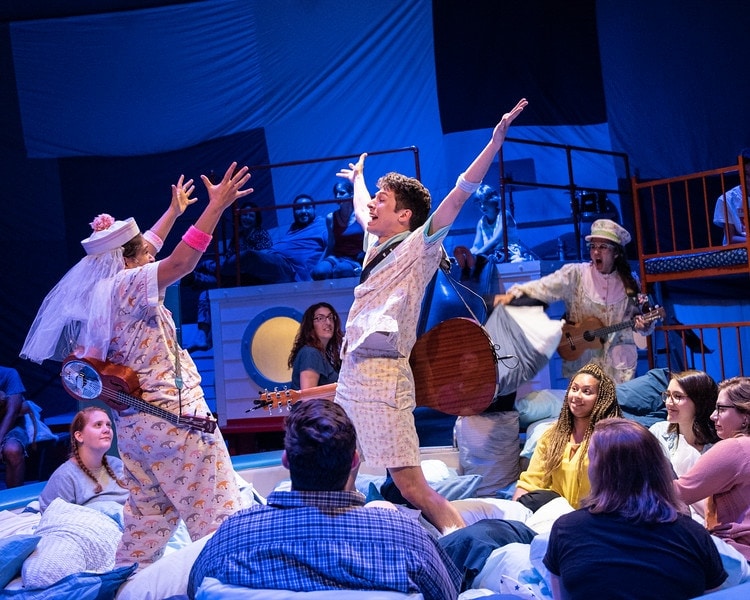 The charming love story between Ralphina and Joseph is well-supported by Dana Saleh Omar and Mario Aivazian’s ability to maintain a thread of tenderness between their two characters, despite the lighthearted and flippant nature of the overall production. Their solos were filled with such genuine emotion that they would have easily fit in within the most sincere and unadulterated version of Pinafore.

So, the pajamas. This is what Costume Designer Alison Simple has our sailorettes suited up in. It’s an interesting choice which lends itself to the “slumber party” atmosphere. Even the techs were in on the action, being dressed up as teddy bears as they moved around the complex set to keep the wheels spinning. Kudos must be given to Scenic Designer Tom Burch for creating such a user-friendly space. In this hybrid between a playground and a child’s bedroom, it’s remarkably easy to shift from place to place when seated in the promenade.

One weakness of this production is linked to one of its strengths. The overwhelming amount of immersion experienced by the audience in the promenade seating can be distracting. There were a few comments from audience members afterwards that it was somewhat difficult to tell the difference between when an actor was signaling a person to move and when they were interacting with an audience member as a supplement to their role. 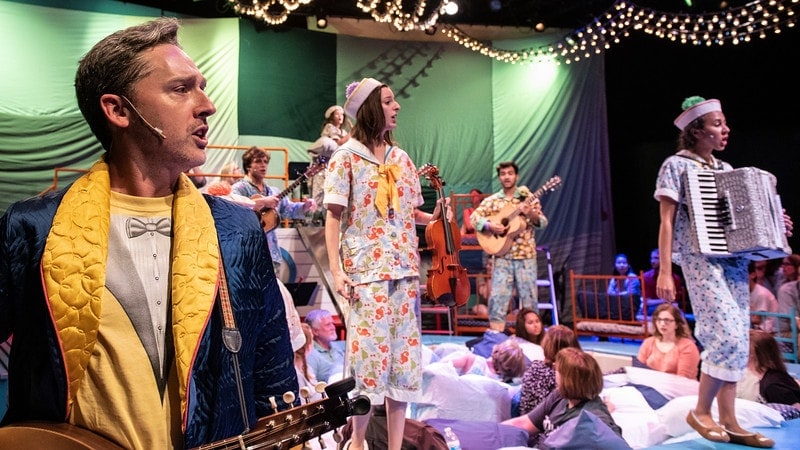 Additionally, going in to this production with some knowledge of the original is not going to hurt, as the fast pace and chaotic movements may distract from the ability of a less-aware audience member to follow the storyline completely.

Don’t take my light criticism as a deterrent. This H.M.S. Pinafore is a unique and unforgettable experience, with or without the “Pirate Punch.” In a world where we are inundated with constant stimuli, it is difficult to encounter something so truly novel. Kids and adults alike will enjoy this celebratory romp through this masterpiece of an operetta, produced in a widely accessible format which presents the audience with a plethora of sensory delights.