God is Dead and April is Getting Married: A show title that promises a lot and absolutely delivers. Written by A. A. Brenner, this Capital Fringe jewel opens with El (Anna Shafer) and Elliot (Colton Needles) discovering a wedding invitation in their mailboxes. Bringing back complicated memories of high school with the bride to be, April (Lauren Farnell), these estranged friends are faced with the decision of confronting or continuing to ignore the past. 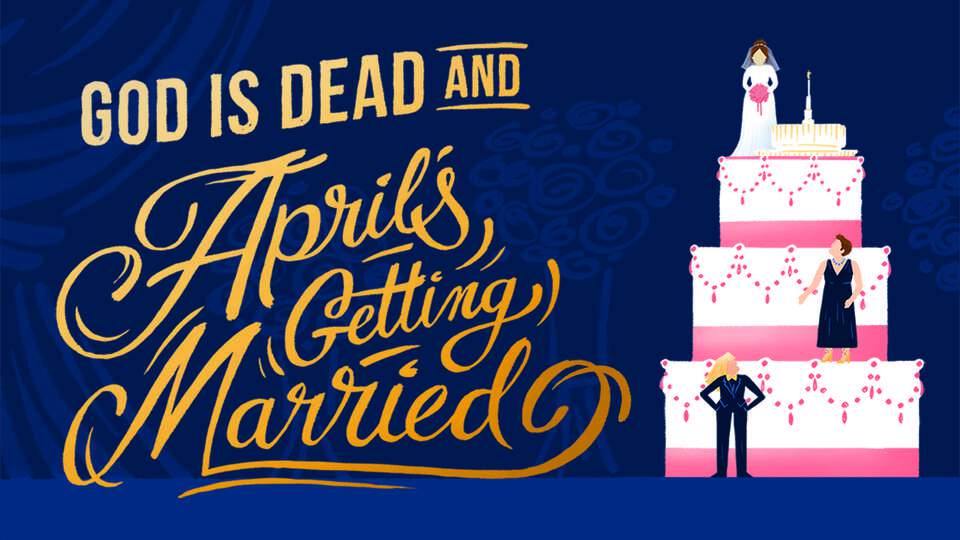 Simply put, this was an extremely tight-knit production with so many clever, subtle elements that it’s hard to know where to begin. From the second you walked into the theater, this production took advantage of every opportunity to advance the plot or make this world feel more real. The music before the show was reminiscent of pre-ceremony music at a wedding, and even the bags, sweatshirts, and pop cans made the spaces feel lived in while also becoming essential props in the action to come (hats off to the Scenic/Prop Designer Micah Chelen).

Direction by Jess Phillips masterfully orchestrated a smooth, consistent flow of events even while flashing back and forth between present and past, which is a devilishly hard balance to strike. Through the blocking, characters were able to melt seamlessly between their older and younger selves, which all the more underscored that their feelings hadn’t faded with time.

Using a mixture of situational and caustic humor, El gruffly and Elliot jitteringly won over the audience as they drank, stumbled, and FaceTimed their way through memories and each other. Their banter was easily the most entertaining element of a show that had already set the bar high.

I was also really impressed by the lighting design by Raymond Simeon and sound design by Tosin Olufolabi. Not only did subtle lighting switches mark the jumps in time, but even the type of lighting used in the two apartments (cool lighting for Elliot and warm lighting for El) marked the divide between the two as they grappled with what to do. Similarly, the sounds that punctuated the show were wonderfully, perfectly placed right down to the ringtone and first dance song. They were all thoughtfully employed to layer even more depth into an already fascinating story.

I’m sure I could watch this production for every single showing of its run at Capital Fringe and find a new way that they’ve successfully crafted this growing up tale. I would absolutely recommend seeing God is Dead and April is Getting Married to anyone who likes a good mix of life, love, and teenage discovery, and doesn’t mind the choice words that come along with it.