Titus Andronicus is the little-known Shakespeare tragedy most reminiscent of a Quentin Tarantino film. Bloody murder, sex, and violence galore, Andronicus is historically a work that critics and audiences alike loved to hate but has resurfaced in the past sixty years as a choice Shakespearean text of avant-garde experimenters. Likewise, traditional stagings and adaptations had more success given an increasingly desensitized Western culture. Vengeance in My Heart, adapted and directed by Capital Fringe regular Mediombo Singo Fofana for Wowdacious Theatre, is a reimagining of Andronicus abbreviated for the small stage into an 80-minute performance. 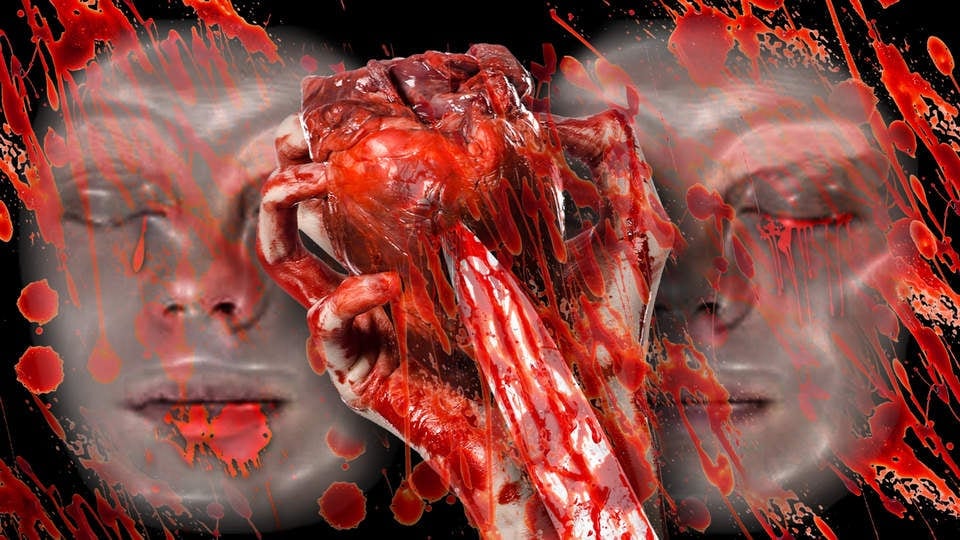 Without going into detail, Fofana’s rendering follows the bloody repercussions of an entire cast of vengeful characters. Tamara, Queen of the Goths (a sultry Meredith Garagiola) seeks vengeance upon Roman general Titus (Eamon Patrick Walsh) for killing her son, Alarbus (Conor P. Donahue). Then, after Tamara’s other two sons, Chiron (Sid Garg) and Demetrius (Connor Drake), defile and dismember the daughter of Titus, Lavinia (Emel Haddad), Titus and Tamara square off as they and their pawns strive to come out on top of this mortal combat of treachery and deception. Meanwhile, Tamara’s Moorish lover Aaron (Miles Foley) stakes out his own bloody agenda.

For those unfamiliar with the overall premise of Titus Andronicus, the details of Vengeance in My Heart might be hard to follow given some odd tonal shifts. From sexy to sadistic to sometimes weirdly humorous, this inconsistency doesn’t quite sit well in an adaptation that seeks to highlight, as Fofana describes in the program, “love of family, love of country, and love of power drive” in any focused way. This might also have been a consequence of overall uneven supporting performances. Save for Garagiola, Walsh, and Foley who held their own, the rest of the cast had trouble maintaining Shakespearean cadence. A shift to a more colloquial adapted script might have corrected this. In any case, this production seems more concerned with provocation through stylized graphic content.

Nevertheless, dramatic contrast lighting casts a foreboding glow during interior monologues of plotting and conniving. Quick flashes of red light are used effectively in the murder scenes among other moments of shock and brutality. For those unfamiliar with Titus Andronicus, it’s important to note that this performance also contains a rather long, uncomfortable rape scene.

A group of six masked actors dressed in black portray the tribunes: dark spiritual advisors to Titus depicted as unearthly spirits that speak in unison like a possessed, dangerous Greek chorus. Initially one of the most interesting additions to this play, especially as they move around in formation like a swarm of cursed birds of prey, their frequent return ends up becoming a little campy.

Still, if you’ve ever had any interest in seeing Titus Andronicus, especially considering the relatively rare occasion of its staging or that of any adaptation, Vengeance in My Heart makes a good entry point for any curious fan of the Bard.

Vengeance in My Heart plays through Saturday, July 28, at Christ United Methodist Church — 900 4th Street, SW, Washington, DC. For tickets, buy them at the venue or purchase them online.