There is a kernel of a great idea behind (Super) Friends, AnyStage Theater’s offering by Andrew Brockmeyer currently playing at Capital Fringe: Two superhero arch-nemeses, one ostensibly good and one “evil,” fall on hard times and end up unwittingly renting rooms in the same communal living situation. Of course, it isn’t Quantum Man (Nate McGraw) and Helion (Jordyn Nicole) renting the rooms, it is their mild-mannered alter-egos Fred and Emma, who – each unaware that they are sharing quarters with their sworn enemy – develop a sexual and personal attraction that manifests itself through their debates on the merits of Quantum Man and Helion’s actions. 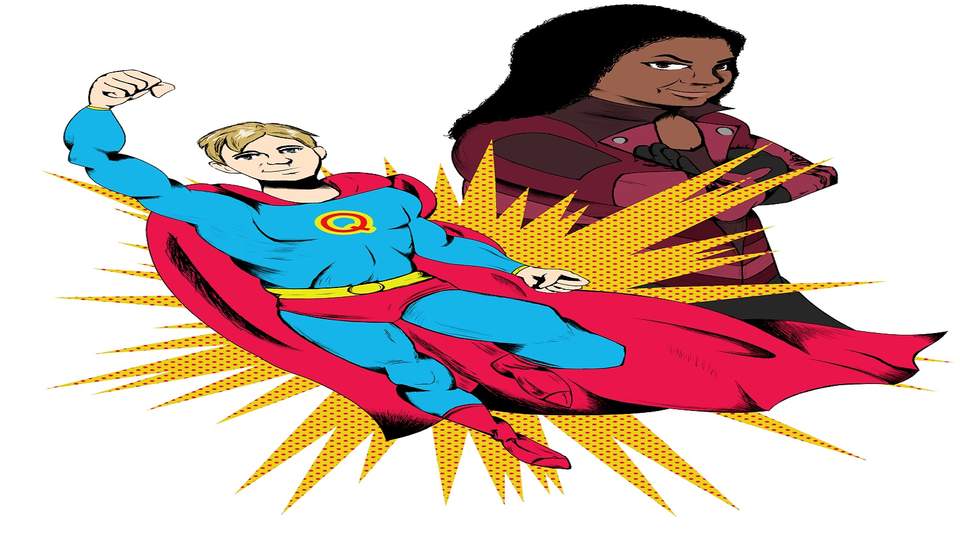 As Director Danny Romeo points out in the show’s program, the play mines the concepts of good and evil, asking audiences to reconsider if a hero or villain can be all good or all evil, and ends with a delightful resolution between characters that I won’t spoil for you.

But this promising story falls flat due to a script that needs major tweaking and some poor acting that derails most of the play’s intended humor.

Several of the scenes did little to further the progression of the storyline, leaving audiences in an uncomfortable limbo while dialogue meandered along. The scene in which Fred/Quantum Man first meets his future landlord Aaron (played by Chad Burst), for example, lost the audience’s attention with timing that was completely off causing joke after joke to lack humor or poignancy. I understand that the character of Aaron was supposed to be a marijuana-loving stoner, but if the choice was to have the actor intentionally deliver his dialogue in such a slow, lethargic manner, this came at the expense of pacing and comedy every time he was onstage.

I did enjoy the background music and recordings employed in the play. Some great superhero music made up for the lack of special effects (which would have been nearly impossible to incorporate given the confines of the Fringe setup). The comic-book-style music (and Quantum Man’s costume) added an appropriate note of whimsy to the production. The inevitable hero/villain face-off, however, could have benefited from some superhero music in the background.

The star of the recordings was Zack Walsh voicing the sassy computer that Quantum Man interacts with throughout the play. Indeed, my favorite scenes were those between Quantum Man (McGraw) and the Computer (Walsh) which served a sort of expository function and gave the audience insight into Quantum Man’s inner thoughts. McGraw interacted flawlessly with the recorded voice and Walsh’s recorded performance injected a dose of verve and humor into the show.

There is a lot of potential in this story, but it needs a lot of work to really nail its mark.