Solo performances are among the most difficult in show business. Without other actors to parry dialog or set up jokes, the entertainer can easily end up putting an audience to sleep. Luckily for us, Dangerous When Wet: Booze, Sex & My Mother—the one-man show now being wildly applauded at this year’s Fringe—has no such problem. In fact, this monologue is so breath-taking that audiences will hang on every word. 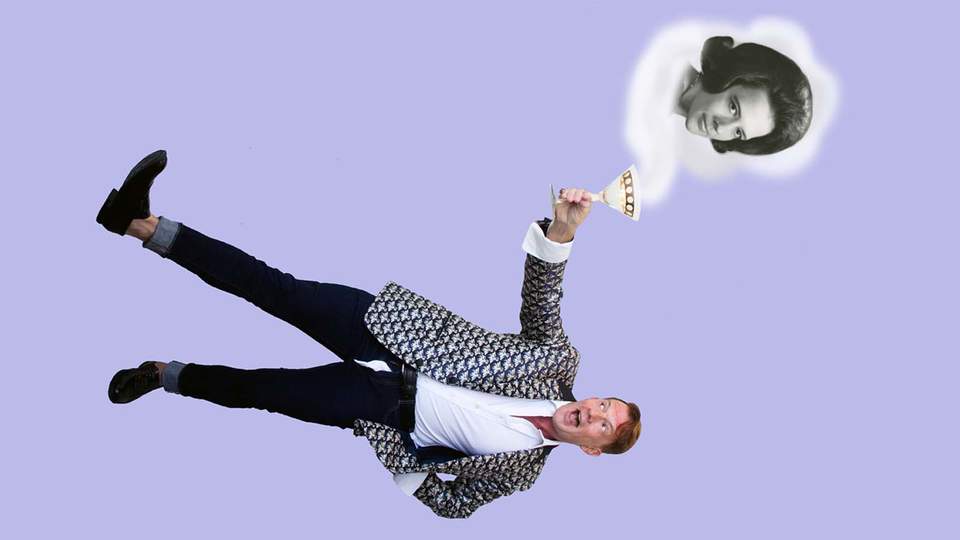 Dangerous When Wet is a beautifully woven tale of addiction. Told by Jamie Brickhouse, who is both the author and subject, it is both funny and sad, horrifying and poignant. The show, originally produced off-off-Broadway in 2017, is based on the memoir of the same name, published in 2015 by St. Martin’s Press and rated one of Amazon’s 12 best books of that year.

As in the book, Jamie faces his demons—booze, sex, and his Texas mother, Mama Jean—one by one, though not in that order. He recounts growing up in a small town in Texas where his mother holds court as a Liz Taylor look-alike and where his father, Daddy Earl, drinks highballs each night and shares the ritual as soon as Jamie hits the age of 15.

Illustrating the saga are projections of photos, postcards, and even a jiggly home movie of Mama Jean and her beautiful boy, who—somehow or other—stopped being cute when he aged out at six. Interspersed with the photos are the plaintive strains of Peggy Lee singing “Is That All There Is” and a poster of Joan Crawford contemplating suicide in Humoresque.

Dangerous When Wet begins when Jamie is 38, some 12 or so years ago. At that time, he’s been in New York for 16 years, living the sophisticated life he dreamed of—a martini in one hand, a cigarette in the other, plus a top job in publishing, a beautiful apartment, and a soulmate for a partner—yet he is simultaneously overdosing on vodka and crack. One night he overdoses on pills as well.

His survives the suicide attempt but then is forced to face Mama Jean, whose feared arrival sets the memories in motion. Her return – and its consequences – form a perfect arc for this show. Brickhouse displays a superb sense of timing, and he holds the audience for seconds at a time with just his voice and eyes.

The performance owes much of its power to David Drake, who has directed it with precision and flair. Drake is a playwright and actor in his own right, as well as the artistic director of the Provincetown Playhouse at the tip of Cape Cod. Elliot Lanes is in charge of “all things tech,” and is well-known to DC audiences for his work at Theater J, Round House, and Studio.

This is a must-see production. It is certainly one of the very best offerings in this year’s Capital Fringe.