Laughter really is the best medicine. As Vincent Clark assumes his place on stage for his one-person, multi-media comedy An Unhealthy Man Lectures You on Medical Issues, I immediately like this ailing man with his single eye, his diabetes, his impacted vertebrae, his clinical depression, and more importantly, his ability to turn personal tragedy into the stuff of comedy. 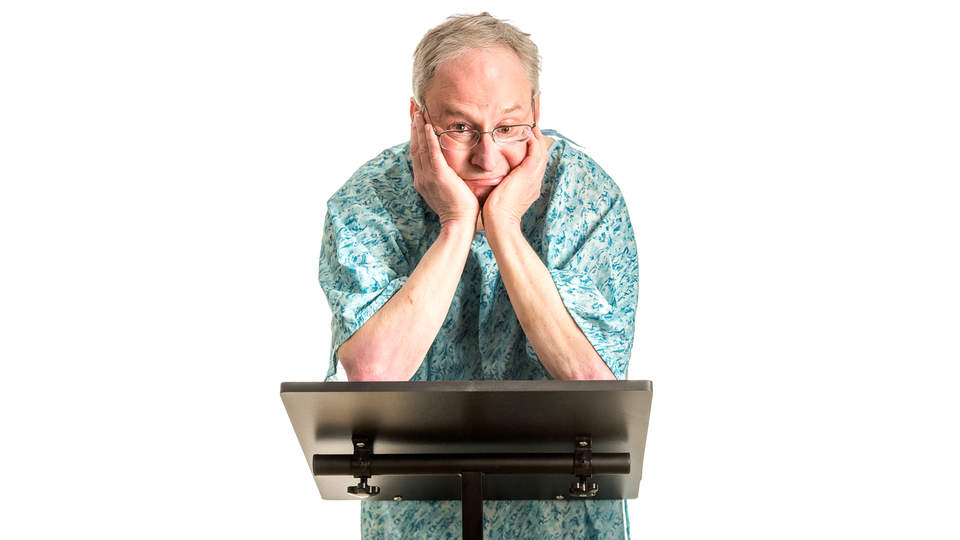 Yes, Vincent Clark is a most unhealthy man. But as the writer, producer, director and sole performer of this show, he is also a very talented one. Clark has written smooth dialogue that rolls off his tongue in fast-paced, humorous lines delivered with confidence and skill.

In the course of an evening punctuated by self-deprecating humor, we learn Clark’s entire medical history. If you’ve ever wanted to laugh about catheters or severe plaque psoriasis, this is the show for you. “When I was born,” he tells us “I had the post-partum depression.” and later: “Thrush! An oral yeast infection. So much yeast! You could stick a stalk of wheat in my mouth and pull out a loaf of Wonder Bread.”

Where the show falls flat is that it was really more of a personal revisiting of Clark’s medical history than any sort of lecture to the audience. Thirty minutes into the performance, I began to feel a bit left out. “Ok,” I thought, “This night is going to be all about you. You’ve been sick. It’s been challenging. I get it. And you managed to craft that trauma into a well written and well-performed piece of theater. But where does that leave us, the audience?” I wanted a lecture that I could apply to my own life. Instead, I felt like a mere bystander in Clark’s medical journey.

The show employed well-timed sound effects, an eager assistant in the form of a nurse (Joan Marie Donahue), and even a rock-musical video in which our unhealthy man sings convincingly about his medical conditions.

An Unhealthy Man Lectures You on Medical Issues will resonate with anyone who has had health concerns, or whose loved ones who do. I would gladly see future incarnations of Clark’s medical story.