What’s worse than murder? What would God say? All the characters are “peddled out,” i.e. in dead-end jobs, down-on-their-luck, or near that, drinking Buds and doing shots at the bar, pulling guns at the deserted fairgrounds, living hard-scrabbled, empty, remorseless, soulless lives. Coronado, by noted novelist Dennis Lehane (Mystic River, Shutter Island, and Gone Baby Gone), premiered in 2006, and it seems like an almost innocent time. 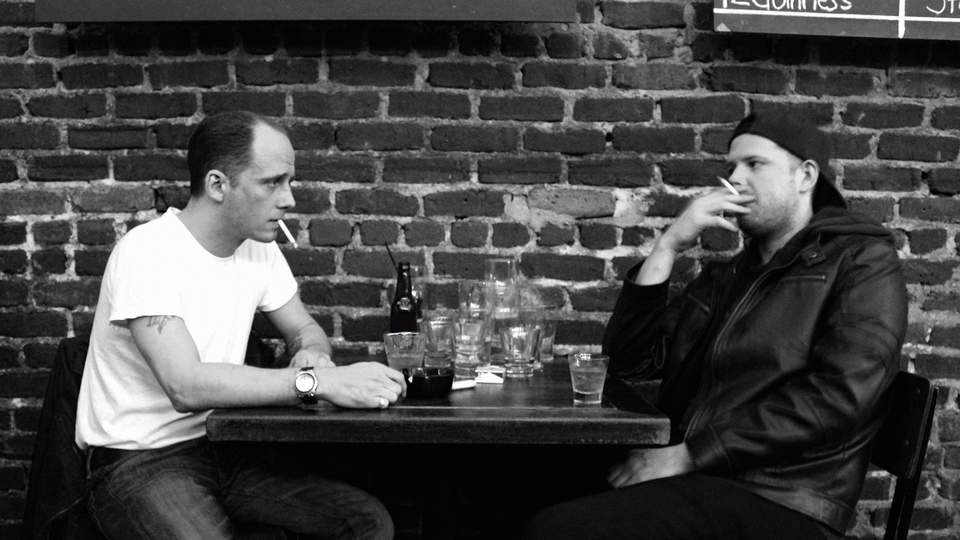 Adultery, betrayal, misogyny, violence, and murder —it should all feel timeless. It’s not for the impassioned performers from Gorilla Theater Productions out of Charlottesville working hard, maybe at times, too hard, to convey the intensity of their character’s lives.

The play opens with three couples at three tables in a bar: two illicit lovers (Andy Davis and Anna Lien), a father and son (Jonny Butcher and Jake and Rakes), and a patient and doctor (Emily Lien and Robert Holden). In turn, each table tells their sad story.

However, the performers often rise above the overwrought and overanalyzed, and those moments make this play worth seeing. A tightly wound Will (Andy Davis) matches well to the low-keyed simmer of Gina (Anna Lien). Bobby’s secret-filled father (Johnny Butcher) reminds one of a young Robert Duvall, smooth and sinister in the same moment.

The doctor (Robert Holden) is suavely understated, slipping in his laments, among the tangle of high-pitched accusations made by his patient (Emily Lien). Ms. Lien shows her range, and the lost possibility of the play, in the quiet moments, and one wishes for more of them—a slow dance, a kiss on the brow. Another performance to highlight: Peter Conklin as the wronged husband Hal. He gives a performance worthy of any big man (think Jonah Hill) playing a weak-willed one with compassion, humor, and rage.

In Act II, the action moves to the fairgrounds and jolts back and forth in time. At this point, the 19-year-old ex-convict and lost boy Bobby (Rakes) shines in a burst of anger directed at his father. Ultimately, the play grinds to an abrupt end with loose ends and lost lives strewing the stage.

The direction of Kendall Aiguier Stewart, who states in the program notes that she spent 11 years wanting to produce Coronado, does an admirable job with this often unwieldy, exposition-heavy play. With minimal staging, good use of lighting, and a few well-chosen musical riffs the multiple storylines lumber forward even as the characters are stuck, finding out what they think they want isn’t enough to satisfy them, or us.

About the reviewer: Caroline Bock’s debut short story collection, CARRY HER HOME, won the 2018 Fiction Award from the Washington Writers’ Publishing House and will be published in trade paperback and ebook in October. More at www.carolinebock.com.