The XY Players have a delightful option at this year’s Capital Fringe: a farce on show business titled Show Business 201. It’s essentially a romp through the training, rehearsal, and performance work of actors in a surreal profession. The proportion of sketches is so heavily weighted toward various types of “classics” (Shakespeare, Wilde, old Hollywood) that perhaps High Art 201 might be a more precise title. 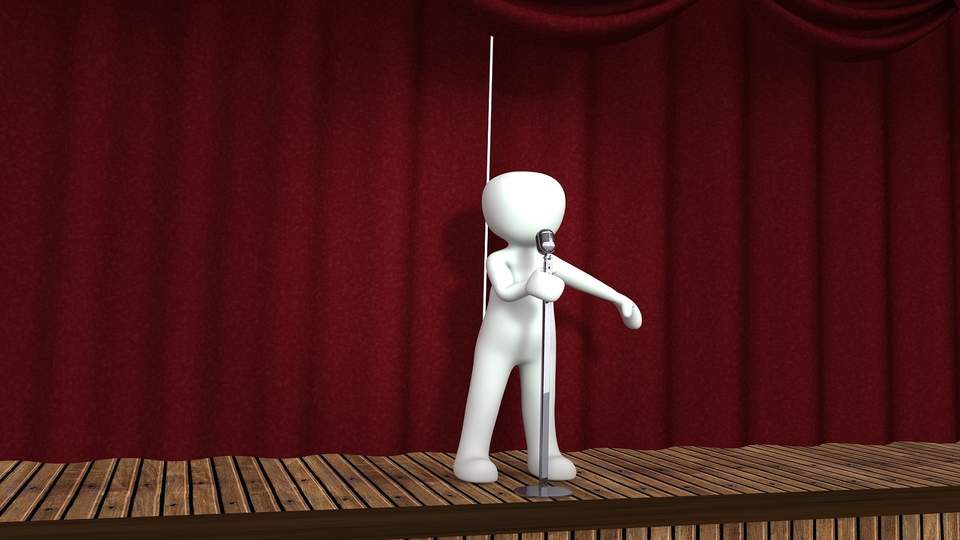 The printed program handed to audience members as they walk in provides a quiz matching quotes pertinent to each sketch (a Jimmy Stewart line in The Philadelphia Story or Elizabeth Bennet’s harangue on Darcy from Pride and Prejudice) in lieu of a list of specific scenes. Each sketch is a self-contained parody of some element of what each work demands, ranging from cross-dressed performances so perfect as to cause gender confusion in their costars, to a pop star whose delusions of grandeur have caused her to literally believe herself a goddess demanding worship. The result is certainly entertaining. Sketches where robot actors compete for roles, or a coach uses bizarre physical techniques to perfect singing, provide enough laughs to make it well worth the spectator’s investment.

The show is exceptionally well-cued and staged, particularly for a show that has no credited director. In this case, particular credit goes to the stage manager, Regina Vitale, for keeping it paced and technically flawless, even if tech here, as with most Fringe events, is limited to a few set properties (a piano or a flower), costumes (Puck is a stand-out at this production), and mood lights in the LED plot (the dim gloom of a Shakespearean forest or the harsh work lights of a rehearsal space).

The four-person cast moves quickly through the seven scenes, shifting easily from roles as diverse as Shakespeare’s Puck in an ultra-modern, polyamorous Midsummer Night’s Dream to a thuggish bodyguard and acolyte of a deluded pop star. Jonathan Barger, Geoffrey Brand, Victoria Sova, and Christen Stephansky make up the cast, and each brings a particular talent to the material. Barger is the more honest, playing roles that often respond to the madness of each sketch, and allowing lines like “sugar, spice, and 90% water” to speak for themselves. Brand is the more ostentatious, shamelessly adding to the gender confusion in both the cross-dressing sketch and the Shakespeare. Stephansky is perfect as the older model of robot actor being supplanted by the more “human” but currently illegal newer model. Sova’s stand-out performance is as the pop star living in a world of her own divinity.

There are also stumbles in the execution. Some attempts at political humor come off as pandering. Except for Barger, several actors put too much emphasis on presentation of character and neglect opportunities to listen and respond in the moment. All the actors have moments of exaggeration that exceed the demands of the intimate space and undermine the humor. However, the combination of charming material and precise, urgent execution far outweigh any imperfections.

Show Business 201 is a tempting diversion that is worthy of Fringe’s diverse, cutting-edge menu.

Running Time: 1 hour and 15 minutes with no intermission.