Raina Greifer’s new play, Mesa, Arizona, or Something Like It, produced by Purple Crayon Productions, is a tale of abandonment, friendship, and the teenage mind. It’s fitting for an ensemble of young actors and actresses who aren’t pretending to be anything they’re not. Rather, these young adults have something to say about a mental state they’re familiar with – compiling original art, poetic scripts, and a bit of mythology into a lesson on abandonment and growth.

The acting is more compelling than you might expect from student actors, which is why the decision to play younger characters makes so much sense. Sophia Varnai plays the distressed protagonist, Sam, who is trying to fight her literal fates. A gingham dress reminds us that she exists in the present day, and little fidgets punctuate her every anxious monologue. She is frantic but logical. Her sidekick, Dot, played by Jamie Griffith, does not ooze loyalty like other “Best Friend” archetypes do, but rather plays the voice of reason. This teenager is haunted by very different demons than Sam. Griffith is down to earth and provides some relief from the long strands of more abstract poetics. As they run from nowhere, Ohio to Phoenix, Arizona, Sam and Dot realize their differences in a convincing show of solidarity and loss.

Sam’s roadblock enters the stage as Makenna Beam, who intentionally plays both of the characters Sam is uninclined to desert. Beam plays the only decidedly “grown up” roles – a position that isn’t easy as a young adult – with a quaintness about her that satisfies the near senility of her characters. The antagonist is on stage, too, in the form of the three fates. Catherine Horowitz, Anna Brookes, and Sophie Falvey are barely human in their permanent roles as the inescapable inner dialogue, draped in cloth and absentmindedly cutting yarn. The alternating nature of their lines sounds more like poetry than any other piece of Greifer’s script, each of the three voices chiming in at different parts of a sentence. It sounds like music. Terrifying, prophetic music.

The set is simple, not revealing any information about where we are in the world. Rather, three person-sized wooden frames sit side by side on stage, each adorned with strands of yarn and later, painted eyes. Greifer writes in the Director’s note that the play is “covered in loose strings” both literally and figuratively. The wall behind them is decorated with art that is colorful, abstract, and somewhat demonic – as are the masks worn during the play. Lighting by Emma Creekmore contributes to a sense of the surreal, plunging the audience into deep red at certain moments occupied by the protagonist Sam’s thoughts or the three fates’ murmurings. Throughout, sound technician Lily Creekmore makes use of eerie white noise that follows the actors’ voices wherever they go. It’s hard to notice it’s there until it shuts off between scenes, when you realize the room was louder than you thought. 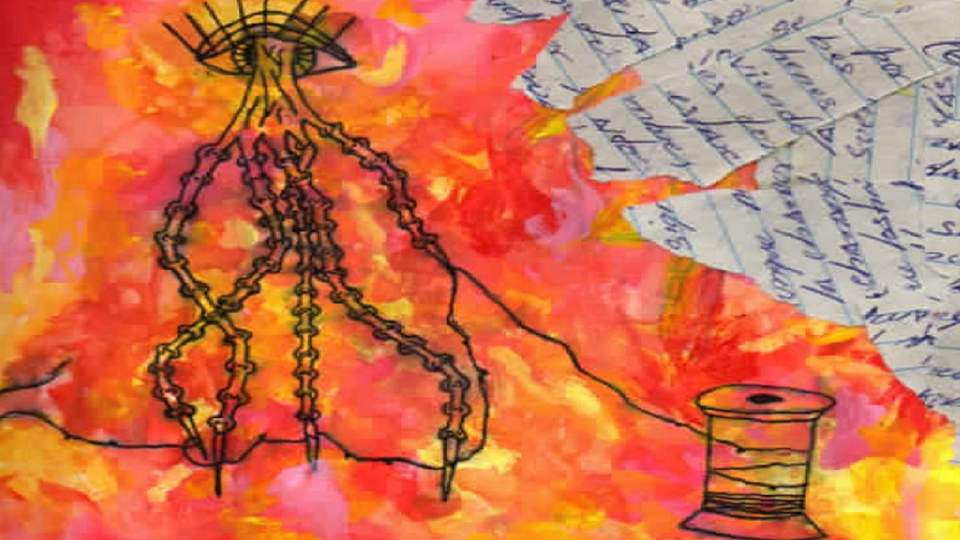 For some, this diversion from a traditional linear, dialogue-based script may be difficult to stomach. But in a 60-minute show, this production makes you feel like you’ve lived another life. The depth of each individual performance, combined with the attention to detail and the immensely personal creative contributions, makes this show a must-see for this year’s Fringe, as Greifer and her team show us all the difference between “leaving” and “moving on.”

Mesa, Arizona or Something Like It, presented by Purple Crayon Productions, plays through July 29, 2018, at Westminster Presbyterian Church, 400 I Street SW, Washington, DC. For tickets, go online.