This comedy about bad theater and inappropriate backstage behavior is just gobsmacking good. Laugh-a-minute is an underestimation. Don’t miss it.

Perfecting the Kiss, a production from New York written by six-time Emmy nominee Scott C. Sickles, is subtitled A Mockumentary for the Stage. It begins with a woebegone stage manager in overalls named Helen (played enchantingly by Helen McMillan), who tells us that though she herself is not a playwright, she has written a play to document the horrible experience she just had in rehearsal for another play.

That other play, Boxing Window, turns out to be hilariously dreadful, and the play about it, Perfecting the Kiss, turns out to be dreadfully hilarious. Take a torrent of theater in-jokes (think Noises Off or The Play That Goes Wrong scaled down to fit a Fringe venue). Then add a tangled tango of sexual misfires, with everyone coming on to someone whose sexual orientation is wrong. 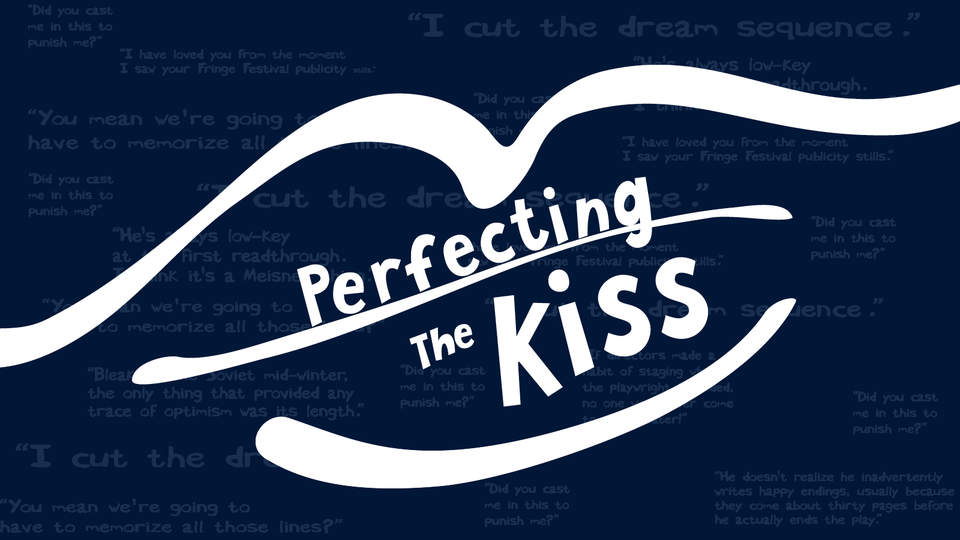 The director of the play that undid Helen is the acerbic auteur manque Edwina (a gale storm of gall played by Mia Moreland). She has the hots for one of the two male hotties she has picked for the cast, Mike (an adorably droll and dry George Redner). He, in turn, crushes on his costar, Buck (an engagingly frenetic Patrick Harman).

Enter the playwright Harvest Carruthers, the apotheosis of pomposity (Daniel Damiano in a Nathan-Lane-ish turn), and more carnal complications ensue.

Despite the fact that at Harvest’s insistence the two male actors spend an inordinate amount of time in rehearsal practicing their hyper-passionate stage kiss (hence the title), Harvest keeps insisting he has not written a gay play. His director has his number:

EDWINA: If directors made a habit of staging what playwrights intend, no one would come to the theater.

Not a few jokes are trenchant takedowns of theatrical pretention. The script of Boxing Windows is the epitome of authorial self-indulgence, for instance, maudlin poetry in mauve, and everyone knows it but Harvest and Buck.

MIKE: It’s not a play, it’s a gay weather report.

And there’s a jaw-dropping anecdote about a high-concept production of Romeo and Juliet that Edwina directed Mike in as Romeo: it was set in a concentration camp, with Romeo a Nazi and Juliet a Jewess.

The room at Arena could not be a more perfect space for conveying rehearsal room ambiance and on-the-fly production values, and the actual director, Paula D’Alessandris, has done a bang-up job. The cast is first-rate and the laughs come fast and furious. Even the light and sound cues—called by the actual stage manager, Laura Schlachtmeyer—are funny. (Kudos to Schlachtmeyer for reading Sickles’s script and urging him to bring it to Fringe.)

Perfecting the Kiss is in town for just two more performances. If laughing at theater’s lapses and whooping at its bloopers is your thing…get thee to this funnery.

Perfecting the Kiss plays through July 28, 2018, at Arena Stage, the Mead Center for American Theater, 1101 6th Street SW, Washington, DC. Tickets are available at the venue and online.