An epic marriage of Ancient, Elizabethan, and Post-Modern stylings, the Broadway premiere of Head over Heels at the Hudson Theatre, produced by Gwyneth Paltrow and Donovan Leitch, is cause for joyous celebration, in its exhilarating paean to “love is love is love” across time, class, and gender. Conceived by Jeff Whitty (original book), adapted by James Magruder, and set to the 1980s beat of the all-woman rock band The Go-Go’s (and lead singer Belinda Carlisle’s solo hits), the clever, raucous, and timely re-envisioning of James Shirley’s 1640 drama The Arcadia (itself derived from Sir Philip Sidney’s long prose romance of ca. 1580), tells the classic tale of the Greek royal family and its coterie of courtiers and subjects finding self-awareness, true love, and acceptance on their quest to escape the Oracle of Delphi’s prophecy of doom for their restrictive traditionalist kingdom.

The new musical comedy exudes a scintillating spirit of historicizing wit, high camp, and sexual innuendo, with its spot-on parodies, gender-bending characters, and risqué themes, seamlessly integrating tongue-in-cheek passages of archaic dialogue in Shakespearean-style verse with 20th-century pop lyrics and the socially-conscious parlance of today. There are hilarious sight gags (an inset tablet in the classical arch behind the ensemble, singing and dancing to “We Got the Beat,” bears the Latin inscription “Habemus percussio”); funny politically-correct dictums (substituting the non-binary “singular them” for the “you” in “Mad about You”); and unfinished raunchy limericks that reference the poet Sappho and require the audience to fill in the blanks (“My beauty’s known in many lands/From India to China/If you desire to take my hand/You must have a . . .”) – all of which riotously tie together the songs, themes, and motifs with the disparate periods.

Adding to the overall gaiety of the show are cross-dressing disguises and mistaken identities; a genderful series of silhouetted couplings behind a white scrim; a live recreation of Botticelli’s Italian Renaissance masterpiece The Birth of Venus (the goddess of love from ancient Greco-Roman mythology) in full flesh-toned body suit; meta-theatrical breaks through the fourth wall; and a loving herd of humanized dancing sheep. All are delivered, under the energetic and sharp-witted direction of Michael Mayer, by an exuberant cast that brings humor, empathy, and commitment to the over-riding message of opening our hearts and minds to diversity, while having a rollicking good time and enjoying life and love to the fullest.

Peppermint, of RuPaul’s Drag Race fame, commands the stage as Pythio, the spicy gender-fluid Oracle of Delphi, issuing ambiguous prophecies, dire warnings, and woke pronouncements to the mere mortals of Arcadia, while making Broadway history in a smashing debut as the first trans woman to originate a principal role. Andrew Durand and Bonnie Milligan bring their impeccable comedic chops and flawless timing to the roles of the shepherd Musidorus (in love with the king’s younger daughter Philoclea and willing to assume the guise of an Amazon warrior to stay close to her) and the full-figured Princess Pamela (who unabashedly boasts of her acclaimed beauty, while rejecting the parade of male suitors who seek her hand and discovering the real reason for her discontent). Alexandra Socha as the petite and unassuming Philoclea (considered “plain” in comparison with her vain sister) and Taylor Iman Jones as Mopsa, daughter of the king’s viceroy and lady-in-waiting to the princess (who also contributes commentary and takes the lead in the show’s most delightful scene – her “Vacation” on the isle of Lesbos) turn in increasingly empowered portrayals of their love interests. Rounding out the terrific cast are Jeremy Kushner as the close-minded King Basilius, Tom Alan Robbins as his affable Viceroy Dametas, and Rachel York as the self-possessed Queen Gynecia, whose powerhouse vocals (along with those of Milligan) number among the musical’s many highlights.

Spencer Liff ‘s vigorous choreography matches the irresistible buoyancy of the songs (the company’s opening number “We Got the Beat” is the standout, in a list that includes such familiar chart-toppers as “Our Lips Are Sealed,” “Heaven Is a Place on Earth,” “Cool Jerk,” and the titular “Head over Heels”). The ensemble is accompanied by a rocking five-woman band that pays homage to The Go-Go’s (Ann Klein and Bess Rogers on guitar, Catherine Popper on bass, Dena Tauriello on drums, and conductor Kimberly Grigsby on keyboard), with pulsing music supervision, orchestrations, and arrangements by Tom Kitt. An eye-popping artistic design supports the musical narrative, with a Pop-Elizabethan set (by Julian Crouch), colorful shocks of light that illuminate moments of peripeteia (lighting by Kevin Adams), and lavish costumes (by Arianne Phillips) that synthesize then and now.

Along with its smart sidesplitting humor, striking cross-temporal design, and iconic catalogue of hits by The Go-Go’s, Head over Heels makes serious statements about the ever-changing standards of beauty and the need for female equality, gay marriage, and LGBTQ rights in its progressive “Vision of Nowness.” It all works and it’s all fabulous; habemus percussio. 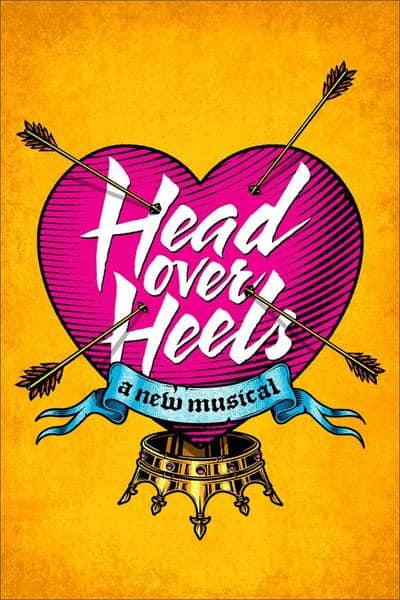