In Sucks to be a Grownup, you’ll see every side of CJ. Her funny side, her angry side, and even her emotional side. You’ll see CJ laughing and interacting with her audience, and you’ll see her crying out in rage. In this 45-minute monologue, CJ will take you through some of the most salient moments of her life, and tell you the lessons she’s learned and regrets she’s had along the way. She’s a grownup now, and that sucks.

CJ, though, isn’t her real name. And she’s decided that she’ll be writing and performing under the pseudonym because she “works with executives,” she explains in the show. Anonymous art has a place in the world – sometimes something is too raw or too risky. But it’s rare, and it should be. Artists should stand proudly behind their work. CJ’s monologue was worse for the fact that she’s needlessly doing it anonymously.

On its own, the monologue improves as it goes along, and her final story, about the inherent sexism that robbed her grandmother of the funeral she deserved, packs something of a punch. But throughout the work, CJ’s personal anecdotes tend to be off-putting or miss the mark entirely.

An entire set is dedicated towards a lesson: choose your words wisely. But in another set in which CJ is discussing an obnoxious tour guide she encountered during a vacation, she needlessly describes the group the guide was leading as “Chinese” and explicitly specifies that they weren’t South Korean. Pointing out their race doesn’t give me a better sense of the place or add anything to the story. Their races are irrelevant. Somebody choosing their words wisely wouldn’t have included it.

I also had trouble sympathizing with her when she demanded the tour guide quiet down because he was ruining her experience, as if the others’ experiences didn’t matter. Nor could I sympathize with the pain she must have felt in internalizing the fact that she purposefully tripped a woman who had accidentally cut her off.

It’s part of a trap she routinely falls into: claiming universal lessons from very distinct and limited experiences. I can’t be the only one in the audience whose version of grownup-ness isn’t likely to include several trips to far-flung parts of the world. Her curious comment about feeling territorial over public elevators (and how growing up meant learning to share them) also didn’t relate to me. The monologues could have benefitted from more acknowledgment of how her perspective might differ from others, and how this is a journey to finding her own grownup-ness, not to finding grownup-ness in general.

Performing is hard. Monologues are hard. Standing alone on a stage before an audience and telling deeply personal and painful stories is hard. CJ ought to be commended for doing it. But if you’re prioritizing shows in your final Fringe weekend, don’t put Sucks to be a Grownup at the top of your list.

Running Time: 45 minutes (although information on the website lists 75), with no intermission. 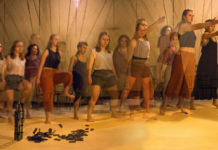 2018 Capital Fringe Review: ‘up your aesthetic’