Artistic Director Jordan Friend had a clear vision when 4615 Theatre Company began producing full seasons last year. Each 4615 season would kick off with a pair of shows – one classic, one contemporary – performed together in rep. 4615 pairs shows that may not immediately have obvious commonalities, but upon closer look are found to share themes and styles, transcending time and offering audiences a chance to reflect upon the universal elements in the shows.

Friend refers to this as a “Storytelling Echo Chamber” in which writers separated by decades, centuries, or millennia communicate with each other through their work. He explains: “This can be either consciously, through adaptation, or through resonances that we identify between pieces, be they thematic or structural. Of course, it is always fascinating to look at how older storytelling influences the work of today, but I’m also incredibly moved by the notion that people separated by oceans and time have been and continue to be wrestling with the same questions, and telling the same tales.” 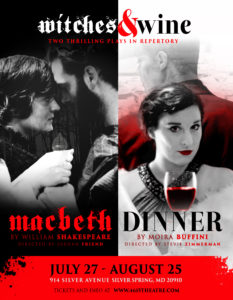 This summer’s repertory offerings are Shakespeare’s Macbeth and Dinner, a 2002 play by Moira Buffini, whose Handbagged was produced at Round House Theater for the 2017 Women’s Voices Theater Festival. While Macbeth, which follows the titular character’s journey from brave general to despotic ruler, might appear to have little in common with Dinner, the story of a 21st century woman hosting a dinner party to celebrate the publication of her husband’s latest book, the two shows have more in common than you may think.

Shakespeare and Buffini both “write big.” Indeed, Buffini is a leader of the British Monsterist movement, through which playwrights advocate for writing expansive plays with large casts. And Shakespeare, well, he’s Shakespeare. Thematically, Friend says, “Macbeth and Dinner both tackle the provocative question of playing god. Our two protagonists, Macbeth and Paige, are each fighting to shape the narrative of their lives; to have their story happen on their terms. What’s more, the supernatural floats around these worlds in ambiguous, unsettling ways. In Macbeth, you have the famous witches, as well as the play’s remarkable devotion to nature-driven imagery. Over in Dinner, everyone notes the bizarrely thick fog surrounding Paige’s opulent house, “spewing” in the guests [including one crucial ambiguous figure] as they arrive.”

Friend hopes audiences will find their own connections between the shows and come away richer for the experience. “While we certainly have our own ideas for why we choose the shows in our season, everyone who sees them will connect the dots differently. That is the ultimate benefit of creating a season designed for comparison. The echoes you find across the shows are as much a reflection of what inspires you as what was on the writers’ minds. It may sound a bit hokey, but seeing a repertory is as much a chance to learn something about yourself as it is to compare the works of two playwrights.

“To see Shakespeare and Moira Buffini both tackling similar themes is a thrilling reminder that we’re all looking up at the same stars, but seeing them through the prism of our own, unique voices,” Friend concludes.