First, to avoid any confusion, let me state what this Frankenstein is not:

Off the Quill’s Frankenstein, as brilliantly adapted by Patrick Mullen & Tom McGrath and ably directed by McGrath, is a brand-new reanimation of Mary Shelly’s classic novel, 200 years on. Shelly’s 1818 masterwork, published when she was 20 years old, has been called the first science fiction novel and has spawned an entire genre of plays, from one Shelly herself attended in London in 1823 up until today. This current production is a more than worthy successor. The writers decided to return to Shelly’s work, and breathe new life into the language and philosophy of the original as well as the horror – both physical and moral. 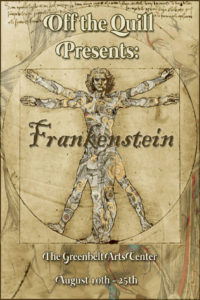 The first sign that we are in for a classy production is the elegant design of the show’s graphic, by Patrick Mullen and Katie Wanschura.

When the audience first enters, to the agitating strings of Vivaldi’s “Winter” (doubly appropriate to those who know the opening setting of the story at the North Pole) the set (again by the multi-talented Mullen) seems unprepossessing – just hinged flats in shades of beige, brown and black with an arch in the middle. But as the play progresses, these flats open out to provide careful depictions of Frankenstein’s home, a cottage in the woods, and most important, the lab, complete with anatomical drawings, arcane equipment and a sinister leather apron hanging on a peg.

From the start, when Viktor Frankenstein (Andy De) awakens violently under the watchful eye of The Creature (Jimmy Heyworth – with effective makeup by Chelsie Lloyd) the two seem to circle each other, whether locked in a ritual dance or the prelude to a duel is hard to tell. The creature is not the mute and moaning monster of the movies. These antagonists battle with words and wits as well as violence. (There are a great many words, and De and Heyworth, who have both just come off of Fringe shows, deliver them with remarkable grace. The opening night stumbles were few, and will no doubt vanish as the show goes on). The performances are excellent, running the gamut from abstract philosophical discussion to mad hysteria to murderous rage to touching grief. Both actors have appropriately spine-chilling laughs and can veer from quiet affection to hoarse fury as needed. They are compelling throughout.

The other actors are fine as well, in multiple roles. Donald Cook distinguishes nicely between Viktor’s pompous father and the sympathetic blind cottager who teaches the creature to speak and read and tell right from wrong. Patrick Mullen (as if he didn’t have enough to do) provides dapper comic relief as Viktor’s best friend Henry, and Leanne Dinverno brings an appropriate amount of intelligence and impatience to Mary Shelly’s version of the imperiled fiancée, and also embodies the Creature’s intended bride with a striking mixture of horror and humor.

In this new production, the adapters use Shelly’s elegant and philosophical language to excellent effect, but dissect the story down to its bare bones and sinews, and twist it into a tight helix – two strands of Creator and Creature, forever intertwined, coiling in on themselves. The result is both literary and visceral, with an ending so perfect it made the hair stand up on the back of my neck – and that’s all I dare say about that.

And remember: Although this production equates the two in fascinating ways, Frankenstein is the Creator, not the Creature – although who is Master and who is Monster is up for debate.

Although it has been produced by a small group of people wearing multiple hats, this is a professional-quality piece, constructed with thought and care, that would not be out of place off-Broadway. I hope it has many more re-vivifications, but you can see it now, in its first incarnation, at the Greenbelt Arts Center, until August 25.

Off the Quill’s Frankenstein plays through August 25th, 2018, Fridays and Saturdays at 8 pm, Sundays at 2, at The Greenbelt Arts Center 123 Centerway in Greenbelt, MD. For tickets, buy them at the door, or purchase them online.