In September 1957, Central High School in Little Rock, Arkansas, became one of the first educational institutions in America to become integrated, when nine heroic black teenagers enrolled in the 30-year-old previously-all-white school, bravely facing racist hostility and hateful opposition from classmates, pro-segregationists, and the state’s own Governor. Playwright and Director Rajendra Ramoon Maharaj examines the personal stories of the Little Rock Nine, their historic battle for Civil Rights, and the mid-century era of the Jim Crow South in the New York premiere of Little Rock at The Sheen Center, following its developmental production in the 2011 New Works Festival at TheatreWorks in Palo Alto, California, and an award-winning debut at Passage Theatre in Trenton, NJ, in 2014, which received a Barrymore Award for Excellence in Theatre for Outstanding Ensemble.

I had the opportunity to speak with Rajendra during the show’s New York engagement, for a spirited discussion about the momentous theme and his process of developing the real-life events and characters into a play.

Deb: At what age, and how, did you first become aware of the Little Rock Nine, and when did you decide that it was an important subject to bring to the stage?

Rajendra: I was directing Dream Girls at Arkansas Rep, so I went to the Center [Little Rock Central High School National Historic Site] and learned a lot more about the Little Rock Nine while I was there. I had also met the late great August Wilson who talked about “sankofa” – which means, in the language of the Akan people of Ghana, “go back to the past and bring forward what is useful.” It’s like your ancestors are taking a hold of you and don’t let go. For the most part, up to that point at Arkansas Rep, I had been directing and choreographing, but I had a strong reaction to the story of the Little Rock Nine, so that was my real entry point into writing this play. It’s been a long process, and at the time I couldn’t have known that now, thirteen years later, it would be playing Off-Broadway!

Do you see an even greater relevance now, than when it premiered at Passage in 2014?

Absolutely! Yes, ma’am! That was a time in Little Rock when the President of the United States, who had also been a military leader, sent in troops to protect nine black children who were following the law and wanted to get an equal education. Recently, Ernest Green, the first of the Little Rock Nine to graduate, asked me, when we were chatting, if I thought the current administration would have done that?

As an artist, and a human being, do you have any concerns that the people who should most see it and learn from it are not likely to come?

That’s a great question. It’s been really interesting for me to watch the audiences. They represent the diversity of our country and it’s been really delightful to see multi-generational families coming to the theater to bear witness to the Little Rock story.

Tell us about your creative process in developing the work, in terms of research and interviews.

I wanted to honor the Little Rock Nine and hold onto the integrity of their individual unique stories. After all of the research and interviews, there was a lot of writing and rewriting; what was most important to me was maintaining the integrity and truth of their words and shared experiences.

Were there any surprises or new revelations that came to you in the process?

At dinner one night, Ernest told me that his mother had a Master’s degree, but she couldn’t walk with the rest of the students to receive it, so he definitely wanted to walk with the class when he graduated. I said, “YOU DIDN’T TELL ME THAT UNTIL NOW???” So here I am interviewing a man for whom I have so much respect and who made such a difference in our country’s history, and I’m yelling at him! But I was so excited to hear it, and I knew for sure that I wanted it to be a scene in the play, so I just couldn’t believe he didn’t think it was important enough to have told me about it right away!

I was a Judge for the Barrymore Awards when Little Rock won for Outstanding Ensemble. Is the cast of the New York production an all-new group of actors? What does this company bring to the show that is different from the previous production, or have you made any changes in the script?

Oh God, yes! The first act now is focused on the Little Rock Nine trying to get into the school, and the second act takes place once they’re in it. There’s also more emphasis on the music. Many of the songs are the same, but we added a few, and the vocal standard is elevated with this cast; they all have powerful voices, and the amazing Darryl Ivey did new vocal arrangements. There are also projections from the time, designed by Wendall Harrington, in the New York production, and costumes by Leslie Bernstein that were carefully created to shape the different personalities, so I’m very excited about the new designers. I loved the previous version in Trenton and am very grateful to Passage, but the show is always evolving with each new production.

The mission of The Sheen Center seems to be a perfect fit for the theme of Little Rock. What has your experience been with the venue and its team?

It’s an intimate space, which works perfectly with the story, and the acoustics are excellent for the vocals.

Are there any benefits, or pitfalls, in directing your own work?

Because I do documentary theater and the real subjects I write about make such an imprint on my heart, I like to direct my own work, to be there to get the reaction. The Little Rock Nine never asked for a dollar from me to do this, so, as I said before, I wanted to keep the integrity of the story they told me.

What’s your first creative memory – the one that made you think that a career in the theater would be right for you?

For me, the defining moment was in church, at an Easter reading of the Passion. While I was listening, I was thinking to myself, I could direct this! There should be smoke, and he should walk over there, and they should move around the aisles . . . I remember my grandmother smacking me in the back of my head from the side, saying “What’s wrong with you, boy? Sit still and pay attention!” I was probably six or seven, and it’s funny that Little Rock is now being performed in a former church, at The Sheen!

What’s up for you next, after Little Rock?

I’m working on a new project now involving the American dream. I’m talking to children and families dealing with immigration issues and being separated from their families. Like when I started the journey of Little Rock thirteen years ago, this new play has been eye-opening and soul-stirring.

Many thanks, Rajendra, for taking the time to give us some insights into the history and production of Little Rock; it was a pleasure talking to you! All best wishes for continued success with this very moving and significant show; I look forward to the next one. 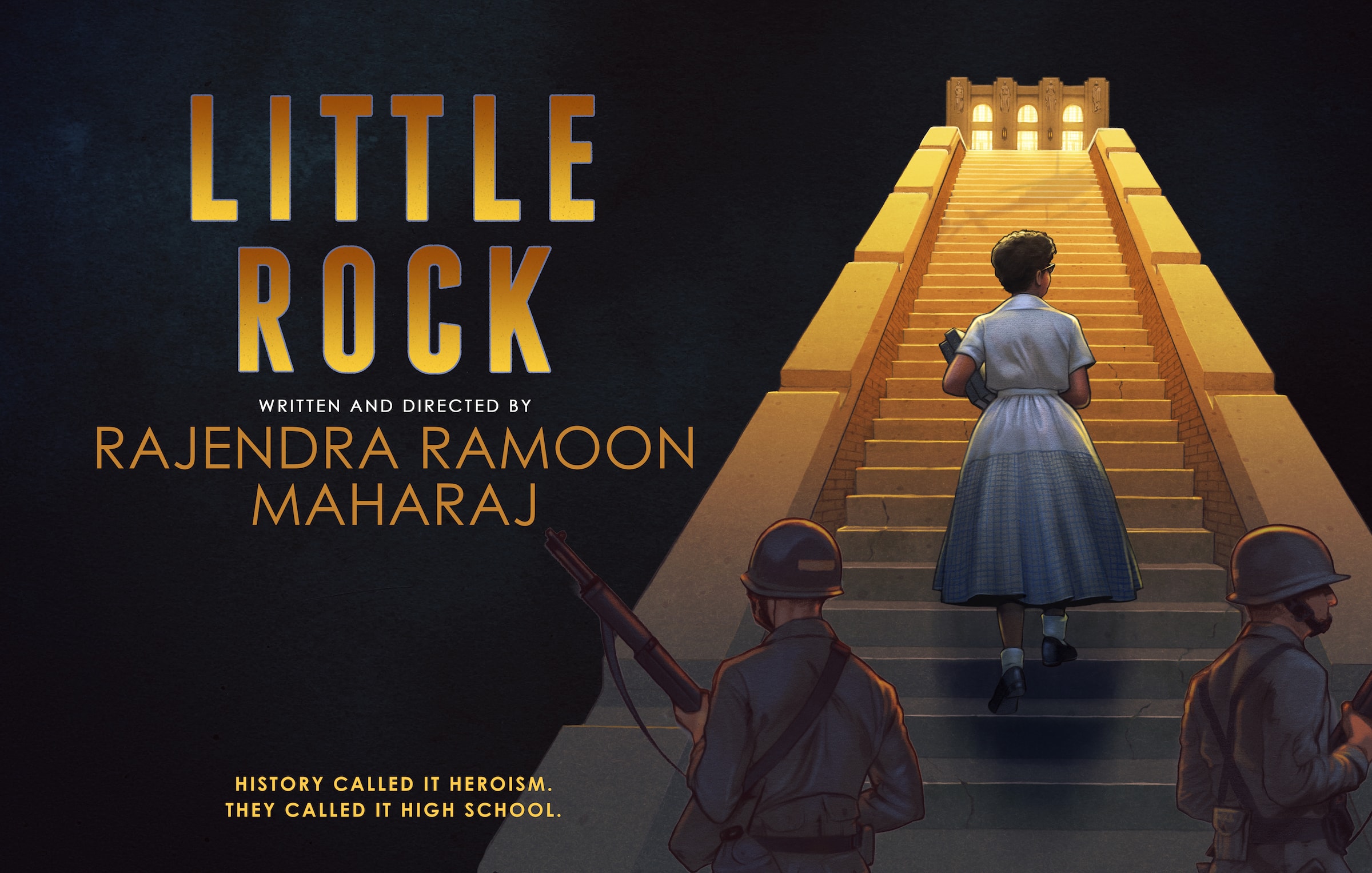