First-rate Shakespeare for free is one of the most valuable gifts the Shakespeare Theatre offers the DC community. The two-week run of Romeo and Juliet is a reprise of director Alan Paul’s acclaimed 2016 production. Associate Artistic Director Paul’s resplendent Camelot, also at STC, was extended due to popular demand. This Romeo and Juliet is another opportunity to see this gifted artist’s work, with a superb cast and creative team. It is also a chance to ponder the reasons for Shakespeare’s lasting influence, and extraordinary appeal to each new generation.

Romeo and Juliet killed themselves for their love, so I think you can at least answer my text message. -unknown

Shakespeare, according to scientific studies by Professor Philip Davis from the University of Liverpool, is known for the “Wow” effect. Davis states that the Bard’s ability to forge “lightning- fast capacity” for creating metaphor engenders a “theater of the brain.”

Davis conducted experiments investigating how the mind processes sentences. He concluded that Shakespeare is the master of the P600, or “Wow Effect” in the brain. Instead of predictable, linear sentences, Shakespeare shifts the grammatic function of words, turning an adjective into a verb, a pronoun into a noun, or a noun into a verb. These changes excite us, causing the P600 response, an increase in brain activity. This may account for the intense effect of Shakespeare’s words on readers as well as audiences.

Some studies also reveal that the brain is wired to recognize poetry. Written poetry dates back over 4,000 years, and originates in even older oral traditions. Some common human responses, which have been tested, are chills and goosebumps. Like music, poetic language has a profound effect on its listeners. It leads not only to pleasure, but to deep emotional connection.

Poetry is the perfect remedy for the conventional and the predictable, which easily becomes dull and uninteresting. Which brings us to the enduring popularity of Romeo and Juliet. Apart from the fact that they meet upon a sonnet, which is intrinsically romantic, their love story contains some of the greatest poetry in the English language. To experience that poetry is to feel an enjoyment that reaches deep into history, to our ancestors centuries ago. We seem to intuit, despite the tragic overtones, that the story is a celebration of love.

Director Alan Paul, with this year’s Free for All, brings us all the depth of Shakespeare, with a distinctively modern touch. The hope, turmoil, and passion of today’s teenagers take center stage. 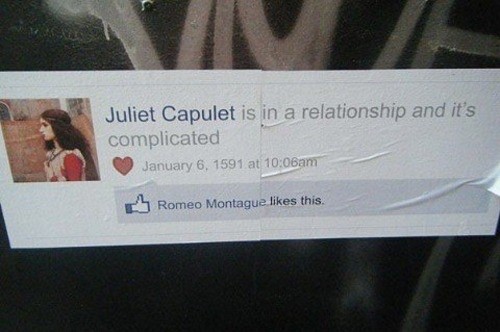 At first, we see what looks like an Italian social club in Carroll Gardens, NY. The colors range from red to deep maroon. There is a second level, with a balcony, of course, and a central compartment which displays at different times a window, a DJ, and a statue of the Madonna. The statue is a reminder that Romeo and Juliet inhabit a largely Catholic world. The Montague and Capulet boys, all of whom are in a sense jeunesse dorée, come in ready to rumble. Sampson (Elan Zafir) and Gregory (John Keabler) provoke the rival Montagues, and a fight ensues which even the peace-loving Benvolio (Sebastian Chacon) cannot seem to interrupt. It takes the Prince, Escalus (the always enjoyable Craig Wallace), to bring back some semblance of civilized behavior to the scene. Wallace’s commanding voice brings the conflict to a standstill.

Timothy D. Stickney grasps instinctively the underlying contradictions of Lord Capulet’s character. He is hail-fellow-well-met at the beginning, reveling in his role as a host and the father of the eligible Juliet. Later, he scorns his daughter, and his earlier bonhomie makes his angry outbursts at Juliet even more frightening. Judith Lightfoot Clarke reprises her role as Lady Capulet, lending depth to her character with each scene she plays. Mercutio, performed magnificently by Jeffrey Carlson, who won the Emery Battis award last year, teases Romeo (Sam Lilja) about his love for the unattainable Rosaline. It is easy to see from the somewhat affected language (“O brawling love! O loving hate!”) that Romeo is more in love with love itself than with Rosaline, whoever she may be.

Lilja’s Romeo is always in motion. He is nimble and honest, quick-witted but not in love with himself as handsome young men sometimes are. He is beautifully paired with Danaya Esperanza’s Juliet. The two are utterly absorbed in each other, and they grow as individuals as their love faces more and more obstacles.

E. Faye Butler’s Nurse screeches Juliet’s name, fusses over her, and exploits her own physical frailties to the hilt. She and Joe Mucciolo’s Peter make an endearing comic duo. She is especially fine (with the help of some judicious cuts to the script) in the second, sadder half of the play, which places more demands on her character than ever. Ron Menzel, as a sort of Boys’ Town-like Friar Laurence, is equally as skilled as he was in the previous production. 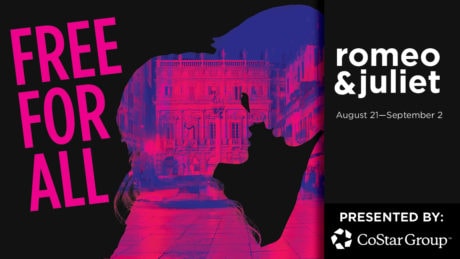 Artistic Director Michael Kahn noted that for many young audiences, this Romeo and Juliet will be their very first Shakespeare play. Since 1991, STC has brought free Shakespeare to almost 700,000 people, thanks to the support of donors, sponsors, and friends. Congratulations to all involved in this deservedly celebrated DC tradition.

Running Time: Two hours and 40 minutes, including a 15-minute intermission.

Romeo and Juliet, the Shakespeare Theatre Company’s 2018 Free For All production, plays through September 2, 2018, at Sidney Harman Hall, 610 F Street NW, Washington, DC. For information on how to access Free For All tickets, go online.