Kennedy Center’s annual Page to Stage Festival is always chock full of tempting offerings, and the challenge of deciding what to see is daunting. It’s like an all-you-can-eat buffet…except you really can’t. The best you can do is pick and choose a tasting menu. So here’s what caught my eye on Saturday. (See Part Two for a look at Labor Day.) 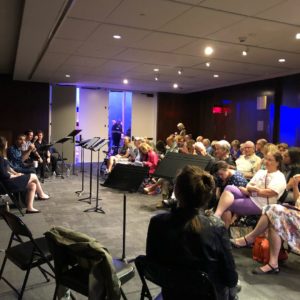 Rorschach Theatre (Jenny McConnell Frederick and Randy Baker, Artistic Directors) specializes in magic, the kind that lifts us out of the everyday real to put us in touch with the timeless otherworldly.  Its Page to Stage entry featured vividly written excerpts from the three world-premiere plays in the company’s 2018/2019 season, each quirky in conception and intriguingly surreal. As directed by Randy Baker, the reading was not a three-parter but rather a mashup. Different casts would read selected scenes from the three plays in a nonlinear rotation that evocatively crossreferenced themes and highlighted a stranger-in-a-strange-land motif. The jump cuts from storyline to storyline in the fragment-mashup format made it all a little hard to follow, but certainly piqued curiosity to know more.

In Sing to Me Now by Iris Dauterman, the Greek goddess Calliope (Callie) is so overwhelmed with her muse workload (“Fewer people get inspired by me”), that she hires an intern to help her out (“People of Earth: I have a job opening”).

During a 24-hour period in the namesake city of the play Reykjavich by Steve Yockey, a man seeking the Northern Lights discovers instead a dark supernatural world where a person can become a bird.  The excerpt read at Page to Stage featured a riveting monolog about a gay man who as a closeted youth stole piles of books and magazines with pictures of naked men—a stash discovered by his father.

And in Annie Jump and the Library of Heaven by Reina Hardy, a 13-year-old girl who is a science genius encounters a genuine alien intelligence who tells her blithely (and factually), “I know everything.”

Alliance for New Music-Theatre:
Women of Troy: Voices from Afghanistan 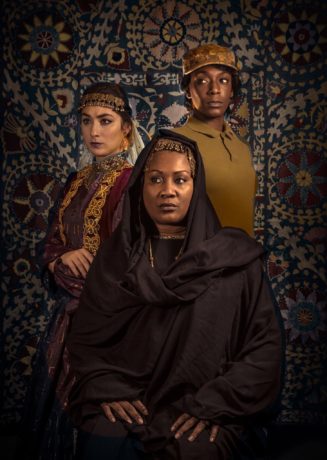 Alliance for New Music-Theatre (Susan Galbraith, Artistic Director) has tackled a retelling of Euripides’ classic anti-war play, Trojan Women, set in the cultural context of wartorn modern-day Afghanistan. Titled Women of Troy: Voices from Afghanistan, the new work incorporates music, dance, poetry, and puppetry performed by a company of American and Afghan artists. Excerpts showcased during Page to Stage featured three musicians on a platform stage left: Co-Composer Quraishi on the lute-like rubab, Co-Composer Dawn Avery on cello, and Qais Nawaz on the percussive tabla. Their stirring and expressive music throughout was what held the excerpts together. Program notes explained what was going on in each excerpt (a synopsis without which the narrative would not have been evident). In one passage, a charming little boy marionette bops to the music, listening and watching. In another, the stentorian god Poseidon orates (“The gods should make peace”), and a huge owl puppet appears (“Women have always been collateral damage.”) The goddess Anahita enters spectacularly as if in a chariot driving four puppet lionesses on leashes of colored silks. When she dances dervish-like, her hands and arms in graceful eloquence, she lets down her flowing hair.  A woman sings in a moving duet with the rubab. These and other evocative sound and movement images—with poetic texts and song, players in richly adorned costumes, puppets on land and in flight—were a glimpse into a work-in-progress that promises to be epic and panoramic.

Women of Troy: Voices from Afghanistan is in development by Alliance for New-Music Theatre. For news of future performances, follow the company on Facebook.

Long before the Women’s Voices Festival caught on, Venus Theatre of Laurel, MD (Deborah Randall, Artistic Director), established itself as one of the longest-running women’s theatres in the world. For 23 years, Randall was friends with Tricia McCauley, a frequent collaborator and a well-known and beloved local actor.  (“We were engaged in each other’s imagination in a wonderful way”). McCauley’s brutal murder on December 25, 2016, shocked the theater community and left Randall in a grief-struck trauma that has only recently lifted, in part through the power of storytelling and Randall’s healing work on this solo performance piece, which she developed as an artistic tribute to McCauley’s life and memory. (“Some of me died with her, but she lives with me.”) At Page to Stage, Randall performed the piece on book but with her heart filled with the pain of loss and decades of love. A personal memorial to a friend and a witness to the affirming bond of theater.

A full production of Living and Dying with Tricia McCauley opens September 20 at Venus Theatre, 21 C Street, in Laurel, MD. For more information, visit the Venus website and follow Venus on Facebook. 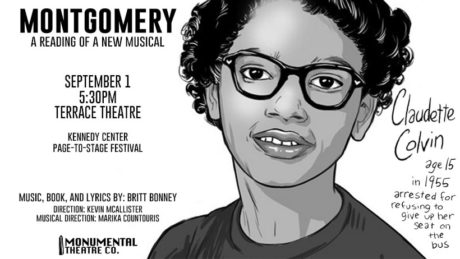 This new musical set in 1955 Montgomery grabbed me from the very first song and kept me moved all the way. That first number is “Let It Roll,” sung by the whole ensemble, about coping with the indignities of living in the Jim Crow South. Next, the ensemble sings “Time to Bring the Rain,” meaning time to resist. Then a 15-year-old girl named Claudette Colvin sings “My Time to Make a Move”—and a gripping story begins about her arrest for not giving up her seat on a crowded bus to a white person. Claudette is whip-smart. She can quote the Equal Protection Clause. She knows there can’t be different laws for different people. She sings “Rebellion on My Mind.”  Claudette’s brave act of resistance on a city bus and arrest really did precede Rosa Parks’s more well-known similar act and arrest. (The musical is based on the historical record as well as new interviews.) But Claudette was young, poor, and dark-skinned, while Rosa Parks would be a more perfect defendant: mature, mild-mannered, light-skinned. So it was that Montgomery’s civil rights leaders chose Parks to catalyze a city-wide bus boycott. Other characters we meet in the breathtaking narrative include Claudette’s mother and father, Mary Anne and Q.P.; Claudette’s lawyer, Fred Gray; and, in a cameo, Dr. King. Kevin McAllister directed a first-rate cast, and Marika Countouris conducted the bracing score. The book, lyrics, and blues and rock music are all by Britt Bonney, who with this Act One (Act Two isn’t done yet) has already made a mark on American musical theater.

I wrote some time ago on DCMTA:

“Two of DC’s most important independent theater collectives bearing witness as black artists to #BlackLivesMatter are Brave Soul Collective  [whose  2018 Page to Stage program Life Lines was at the same time as Montgomery] and African-American Collective Theater (ACT). For several years now I have observed both collectives to be consistent producers of important storytelling about black lives, and both to be generally overlooked by DC’s  mainstream theater world.”

That important history of storytelling continued in ACT’s 2018 program of nine short plays, read to a standing-room-only audience. All were written and directed by Founding Artistic Director Alan Sharpe, and all touched in some way (typically hilariously) on black LGBTQ lives. Sharpe’s keen eye for casting, his razor-sharp cut-a-bitch wit, and his deeply sensitive insight combine to create character after character, each with a compelling backstory and each with a vivid presence on stage. 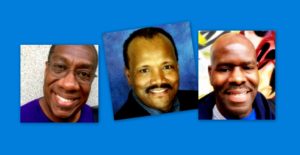 Acerbic jokes about aging and death and randy reminiscences of gay scenes past pepper this sketch set in a DC apartment after the funeral of the lover of one of the three men. “I used to have so many friends!”
Donald Burch III as CLARENCE, August Bullock as SIDNEY, Reggie Covington as QUENTIN 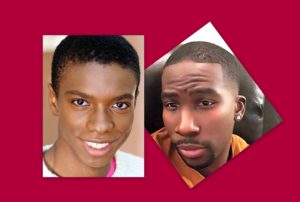 In a Trinidad apartment just after two young men have had hot sex, one of them wonders how the other suddenly got moves and grooves he’d not had the pleasure of before. Had his boyfriend been…practicing with someone else?Davon Harris as CORY and Antwain Cook as DERRICK. 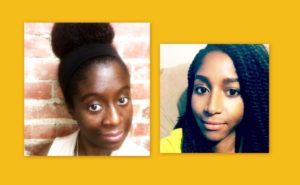 “I want you to leave my husband alone!” says one in a testy confrontation. Turns out it’s the down low husbands who are getting it on.
Mieka Sanderson as JASMINE and Erika Jones as MONICA. 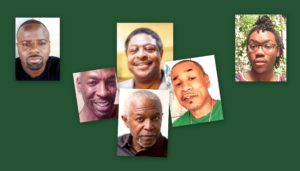 A gathering at the DC Center brings together some local gay notoriety for some nostalgia about gay social clubs and eyeopening disclosures about the latest sexual goings-on. A fragment from a longer-form play-in-progress.
(Clockwise, from top left): Joseph Reaves as RON,  Michael Sainte-Andress as ADRIAN, Jammine Nance as RANDY, Melvin Stanard as ROMAN, Gregory Ford as DEXTER, Darrell Johnson as CLYDE. 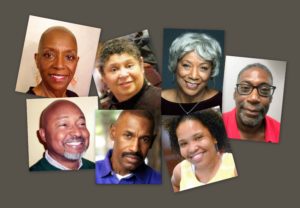 Returning to the theme of aging comedically, Sharpe sets this smart ensemble piece in a senior assisted-living facility called Potomac View, where cheesecake is an unlikely aphrodisiac and the sexual couplings are to die for.
(Clockwise, from top left): Caroline G. Pleasant as MYRA, Paula Pree as MINNIE, Dolly Turner as MAVIS, LaJuan Martin as DR. JAMISON, Wilma Lynn Horton as COURTNEY, Larry Hull as ZEKE & Ronald King as GARLAND 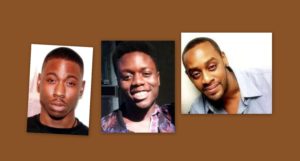 Sex, laughs, and radicalism infiltrate this playlet set in a 1970s church basement where the Black Panther party is running its breakfast program to raise healthy kids for the revolution. A dustup about whether cleaning up is “women’s work” prompts a reminder that Huey Newton argued for uniting the women’s movement and the gay liberation front as potential allies.
Tristan Phillip Hewitt as JAMAL, Emmanuel Kyei-baffour as MILES, Darnell Morris as OMAR. 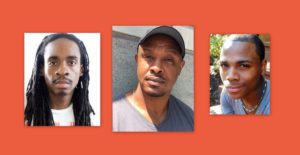 In a Fort Totten condo where two gay men share a happy home, the straight son of one of the men drops in unexpectedly and angry. He’s just out of the joint, come to confront his dad for leaving his mom, and wants to stay there while the older men go on their planned cruise. The father-son conflict sinks it and relationships get rerouted.
Monte J. Wolfe as LEE, Darrell Evans as IVAN, Maurice T. Olden as MARCUS.

“The Worst Thing That Could Happen” 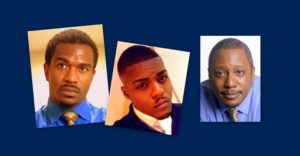 Two young men out cruising duck into the basement men’s room at the old Woodward & Lothrup Department Store and have sex. But come to find out, a security guard is on to them. One young man keeps his cool; the other freaks out; high dramedy ensues.
Marlon Russ as RON, Juan Raheem as JESSE, and Charles Harris, Jr. as the SECURITY 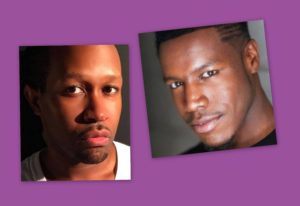 Two young men are in the waiting room of a VD clinic in DC, watching for their number to be called to get their results. One of the young men comes on to the other and wants it now. What could go wrong?
Zukeh Freeman as DAMIAN and Reginald Richard as ARCHIE.