Kennedy Center’s annual Page to Stage Festival is always chock full of tempting offerings, and the challenge of deciding what to see is daunting. It’s like an all-you-can-eat buffet…except you really can’t. The best you can do chose a tasting menu. So here’s what Nicole Hertvik and I picked to see on Labor Day. (See Part One for my reports from Saturday.) 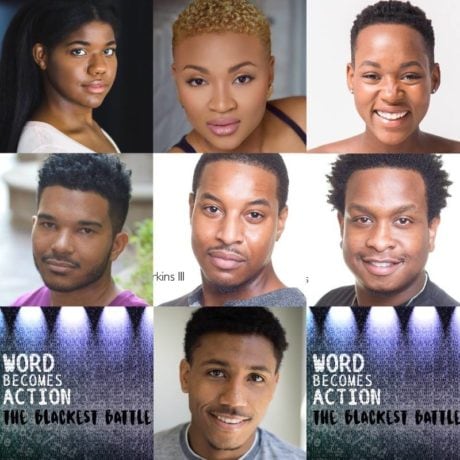 After preshow hip hop tracks from DJ Nicktha1da, a dynamic Ensemble of eight exploded into the playing area. With edgy, driving sounds and movement, they delineated two warring rap factions—the East crew and the West crew—in a fictional New York city (a “slum village”) “where so-called Black on Black violence rains down like a fiery storm.”  The rivalry in this Hip Hop Musical is fought not with weapons but in rap, over whose is the harder.  “I’m tired of violence,” says one. But as with the Montagues and Capulets,  this feud between East and West has no end and no reason. And as in Romeo and Juliet, there is a lovely scene of love at first sight between a young man and woman from opposite camps. They are named Bliss and Dream, and before their romance is discovered (and denounced), they go together to watch fireworks on the pier—a place where slaves were shipped. There is an evocative storyline about drug dealing, but here the drug is called “hope.” It is said to “open peoples minds and show you the truth.” And there is a chilling scene under a bridge where there is a wall on which are written the names of those who have been killed. As shown at Page to Stage, The Blackest Battle appears to have powerful potential as a work of dance, rap, and song to help unpack the horizontal violence that can erupt under a reign of racist hate. —J.S.

Theater Alliance will present another performance of The Blackest Battle Sunday, September 9, 2018, at 5 pm as part of its Words Become Action Festival: Flipping the Script at the Anacostia Playhouse – 2020 Shannon PL, SE, in Washington, DC. For tickets, call the box office at (202) 241-2539 or go online.

Enough by Amber Waltz was a callback to Dickens’ Christmas Carol through the eyes of feminist history. Iris (Paige Davis), a young professional, is trapped in a dead-end journalism job with a male boss (Timothy R. King) who sends her on endless coffee runs, poo-poos her substantive ideas, and then appropriates them as his own. Luckily for Iris, her feminist fairy godmother (Karen Hopfl Harris) is on the job. Watching events unfold from the “femiverse,” feminist godmother decides that Iris needs to be reminded of the long journey women have made in demanding equal rights. She assembles a team of three fairies to take Iris on a journey through feminism’s past, present, and future.

The story is told through a series of delightful songs that were played at Page-to-Stage on a single guitar by Francis Torres González. Enough was chock full of catchy musical numbers. This is theater designed to make a strong social statement—that women have fought tooth and nail for social equality and that there is still a lot of fighting to be done. Music and humor proved effective tools in preventing this serious piece of theater from feeling too heavy-handed or pedantic. —Nicole Hertvik

Technically speaking there is never any page that precedes anything iMusical does on stage. iMusical is a troupe within Washington Improv Theater that just wings it and sings it, making up brilliantly hilarious musicals on the spot based on audience suggestions. Their shows are all one-of-a-kind, one-off surprises. For the Kennedy Center show, the cast asked the audience to pitch ideas about how the world will end. From three suggestions, the audience voted the most popular: “The world will end…because Twitter stays in business.” And so it was that another clever insta-comedy with music was off and running. As always, the amazing Travis Ploeger was playing at the keyboard and doing musical direction in real time. (The communication among performers is so uncanny, I’ve sometimes amused myself with the suspicion that everyone is secretly wired to some offstage prompting genius who’s feeding them cutup setups and laugh lines, lyrics, and tunes. I’m probably wrong about that…but you never know.) I’ve enjoyed iMusical for years in the Source Theater black box, so it was a treat to see how handily the troupe (now actually wired, with mics) filled the full house in the Family Theater with even more voluble laughs. —J.S.

By the iMusical ensemble
Directed by Travis Ploeger

Georgetown University student K.J. Moran has written a hilariously original and powerfully brave play with music about a college-age woman named Lou who was raped a year ago by her then-boyfriend, Eli. It has been a year since and the trauma is still with her—theatricalized as an actor representing Eli, invisible to all the other characters, who won’t leave Lou alone.

Lou has hooked up with Ric, a respectful sweetheart of a guy, but abruptly stops mid-foreplay because she can’t get Eli out of her head. How Lou deals with that past pain and ultimately feels ready to make love again makes for an of-the-moment narrative pulsing with humor and heartache—and honest and brilliant playwrighting. (Sample one-liner: “Sylvia Plath was punk as fuck.”)

The thoroughly engaging supporting cast is rounded out by Lou’s roommates (Genevieve, June, and Lou’s gay bestie Benni) and a punk rock band led by Lazarus Lovesong, whose terrific musical numbers punctuate the story as though they’re Lou’s inner soundtrack. One of the best plays I’ve seen all year. —J.S. 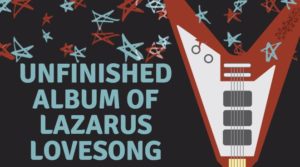 Information about upcoming events in the Georgetown University Theatre and Performance Studies Season is online.