Director Simon Reade’s compelling stage adaptation of Michael Morpurgo’s 2003 award-winning novel for young adults, Private Peaceful, now playing a limited engagement at TBG Theatre, offers an intense and intimate view of the personal impact that the horrors and cruelty of war have on one teenage soldier (and undue casualty) of World War I. A timely message about the sacrifices made by those who fought and died – this November marks the centenary of 1918’s armistice for “the war to end all wars” (regrettably, it didn’t) – the historically-based fiction makes a powerful statement about the need for rationality and compassion on all sides, in the face of the overwhelming terror and tragedy of rampant death and destruction in times of conflict. It’s a story that’s devastating to watch (even for adults, much less for children), but important to hear.

The unsettling memory play is set in the cell of Private Tommo Peaceful, who recalls, in vivid detail over the course of one final sleepless night, the important people and events that shaped his life and sealed his fate. Shane O’Regan stars in the demanding one-man show, turning in an emotionally-gripping and physically-expressive tour-de-force performance as the doomed protagonist and 23 other characters – male and female, young and old, friend and foe – that appear in his recollections and re-enactments. All the while, as he shifts back and forth from the past to the present, and palpably evinces the growing panic he feels in his dire situation, we are made painfully aware of the ticking of the clock and the imminent break of dawn.

O’Regan’s demeanor, voice, and mood fluently change (from sensitive and childlike, to blustery and imperious, to confrontational, mean, and abusive) with each figure he portrays. Actively moving around the stage, he recounts key episodes from Tommo’s childhood (the accidental death of his father, for which he blamed himself; the close bond he always shared with his older brother Charlie; their mutual attraction to Molly and his disappointment upon learning of their consummated relationship) and his youth (news of the beginning of the war; the national call for volunteers; a toothless old woman shaming him into action despite being years too young). He then poignantly captures his character’s fateful coming of age in the British Army (enlisting along with his brother; training and serving under harsh and callous officers; fighting on the front lines and in the trenches of France) and the aptly-named Peaceful’s wrongful demise (precipitated by a pivotal act of conscience and genuine concern for the survival of his brother and their fellow soldiers). Sometimes funny, often distressing, and always moving, O’Regan’s masterful handling of the psychologically-incisive script engenders heartfelt sympathy for Tommo, while also conveying the contrast between subjective views of heroism and cowardice, and the unbridled brutality of the old intractable military policies of the young soldier’s homeland.

Supporting O’Regan’s stellar performance, in historicizing clothing and a period-style uniform, are evocative and unnerving sound effects by Jason Barnes. Anshuman Bhatia’s simple scenic design and dramatic illumination effectively signal the story’s transitions in time and setting – from the passing darkness of Tommo’s current cell to the memories of his childhood bedroom, the countryside where he played, and the French battlefields on which he fought – with the flipping of a single cot and the meaningful changes in the lighting’s color and intensity.

Private Peaceful is a deeply shocking examination of the devastation wrought by war on innocent people, with a profoundly disturbing message of man’s inhumanity to man and an implicit antiwar sentiment that remains sorely relevant 100 years after the era in which it takes place. 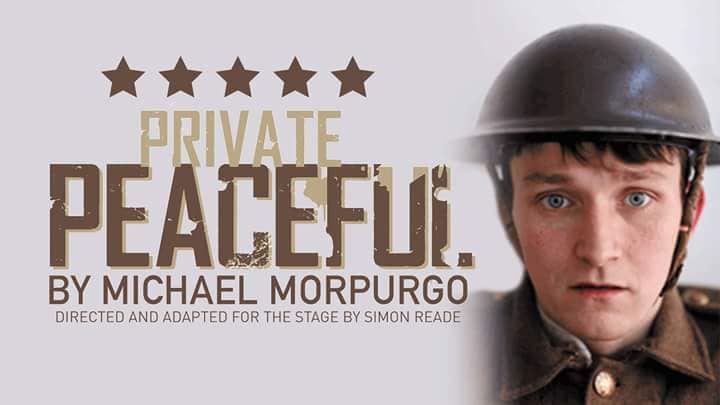