An Alfred Hitchcock-style mystery play unfolds at the Knights of Columbus performance on Friday, October 5, 2018, at 7 p.m. in the St. Leo the Great School Gym. The play is the second original production from Shoestring Theatre Company, based in Oakton. This is a Knights of Columbus fundraiser in support of the intellectually disabled. 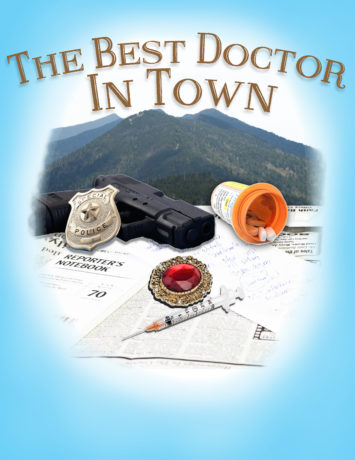 The Best Doctor in Town asks the audience to decide whom to trust. Set in Southwest Virginia and inspired by actual events, the play follows the story of the small town’s most revered doctor, who may just be a serial killer. A local police officer with a tarnished reputation, a reporter who manipulated facts and the doctor’s chief intern, who may be a thief, have pieces of the puzzle. Yet no one in authority believes the great doctor could be responsible. All the while, patients are dying.

“One of the major challenges for people in Southwest Virginia is access to regular mental, dental and eye care,” said Amelia Townsend, Founding Artistic Director of Shoestring Theatre Company. “My late writing partner, Dink Shackleford, and I wanted to write about Remote Area Medical (RAM) and to explore that issue is an entertaining and engaging story. We were inspired by several actual events.”

“We are honored to present this important work as a fundraiser for the intellectually disabled for the Fr. Francis Diamond J. Council of the Knights of Columbus #6292, who have been so gracious and generous in their allowing the Shoestring Theatre Company to rehearse in the council building,” said Townsend.

“The sad opening song came about as I thought about the setting of the play. The history of Southwest Virginia is rooted in hardship. The early settlers found rocky soil and little flat areas to plant. Life was difficult,” Phillips said. “As coal was discovered in the mountains, it continued to be hard. Mining coal, timbering, and farming are not occupations for the weak. They are hard, back-breaking jobs. As I thought about the region and the hardships abounding, phrases began emerging. Hard, Old World, Hard, Old World.”

Founded by Townsend, a Southwest Virginia native, Shoestring is a northern Virginia-based community theatre that shares the culture of Southwest Virginia with the rest of the country through entertaining, original stories. The company is supported by the Fairfax Commission on the Arts, The City of Fairfax, Kimco Realty, The Four Winds at Oakton Condo Association and the Keokee High School Alumni Association, and many loyal patrons.