Ready for some out of this world fun that will teach your kids about good global citizenry?

InterAct Story Theatre’s current production, Voytto Tech: A scifi fable, takes audiences to the far-off planet of Voytto Prime, a rich, intergalactic capital similar to New York City where leaders of commerce, fashion, and finance look down on country bumpkins from frontier planets. Leading the pack on Voytto Prime are its tycoon mayor, Mayor Brendley and his Mean-Girl-esque daughter Ineka Brendley who rules the school and decides what’s cool.

Voytto Prime is home to the prestigious Voytto Tech magnet school which attracts promising science students from all over the country. When Klipp Casey arrives at Vyotto Tech from the far-flung planet of Cadmium, his goal is to learn all he can about science and invention. Instead, he becomes the target of Ineka Brendley’s bullying. Ineka subjects Kipp to a series of demoralizing public attacks and Klipp has to decide how to deal with the situation. Should he fight back? Tell an adult? Reach out to his parents? These are situations that most young people face at some point in their lives and seeing the scenario play out onstage can go a long way in reminding young people that they are not alone.

Each member of the six-person cast takes on a few roles in this production. James Morogiello plays Klipp Casey as an endearing and relatable boy who just may be smarter than everyone else in the room and Kelsey Yudice’s Ineka Brendley will remind youngsters that bullies are just plain mean.

My favorite performance was that of Briana Manente who alternated between the characters of Allie Driscoll – the only student who comes to Klipp’s aid – and Vellum, Ineka Brendley’s mean-spirited sidekick. Manente navigated the two very distinct roles with ease.

Voytto Tech’s production team includes a couple of DC’s heavy hitters. Music by Tom Teasley added a quirky outer-space vibe while Deb Sivigny’s costume design (crucial to the plot since clothes on Vyotto Prime are kinetic and can conduct energy) featured shimmery fabrics and innovatively repurposed items including a green sleeping bag that became a friendly crocodile. Set and lighting design by Peter Oliver-Krueger and Chris Campanella completed the production.

Interact Story Theatre’s Artistic Director, Ali Oliver-Krueger, did a lot of the heavy lifting on Voytto Tech: She wrote the script (with Ben Kingsland), directed the show and played three parts, including the fun cameo role of TV host Stella Supernova.

InterAct Story Theatre works with schools, developing and producing plays designed to be performed in school-settings as education pieces. After the show, Oliver-Krueger told me that Voytto Tech actually began eight years ago as a 40-minute piece that was performed at schools. The show has been reworked and lengthened for this current production.

Audience members get several chances to be part of the story, helping to propel the action onstage through physical and verbal cues. During the Stella Supernova scene, in which TV star Stella Supernova reads to her TV audience a letter from Klipp asking for advice on how to deal with bullying, Stella (Oliver-Krueger) turns her microphone to the audience, giving children a chance to reflect on the best way to respond to bullying. Audience members give suggestions which then become a part of the story.

The creators of Voytto Tech approach the entire theater experience with your child’s education in mind. Prior to the show, parents are encouraged to read over the plot summary with their children and make predictions about what will happen to the characters onstage. Children will enjoy the arts and crafts table set up in the lobby of the theater, where kids and adults alike can make their very own kinetic clothes to wear during the show.

After the performance, children are invited to take pictures with the actors and parents go home with a series of questions that can be used to keep the discussion going.

My elementary-aged children found the show enjoyable and I had to pull them away from the craft table after the show. Voytto Tech offers an engaging way to broach the subject of bullying with your children or simply to enjoy a fun day out as a family.

Running Time: 55 minutes with no intermission. 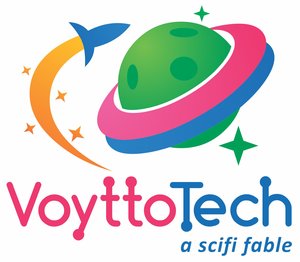