Big Daddy in Tennessee Williams’ Cat on a Hot Tin Roof may boast of owning “twenty-eight thousand acres of the richest land this side of the valley Nile,” but in Center Stage’s comparably rich production, it’s clear that denial is not just a river in Egypt. Every character is denying something, from Big Daddy himself, eschewing morphine for his end-stage cancer pains in the vain hope of forestalling mortality, all the way down to a walk-on maid, who dismisses his sexual overtures as jests rather than desperate attempts to assert, as another Williams heroine once put it, that “the opposite of death is desire.” 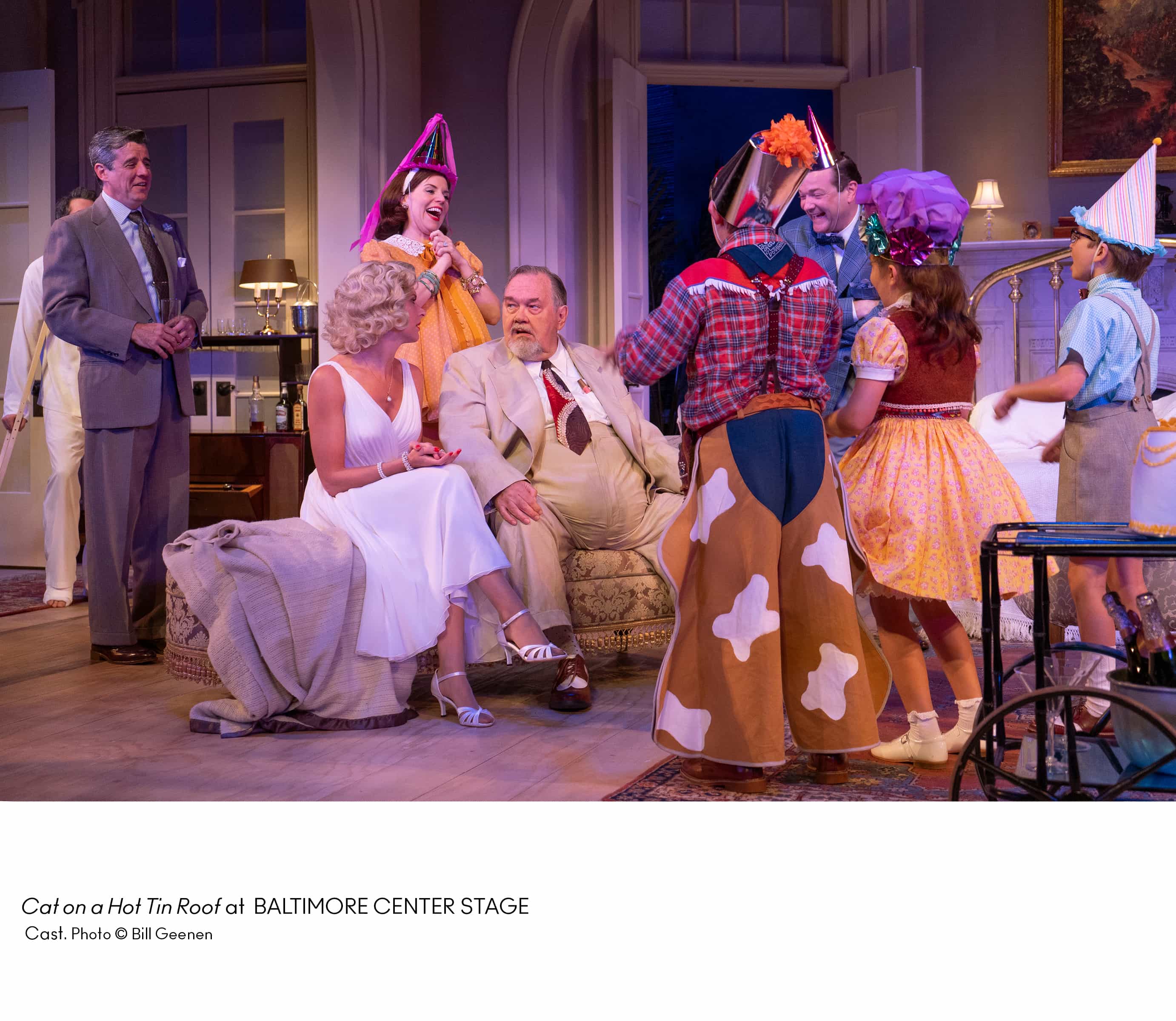 No less tragically, his son Brick is opting for the slow-motion suicide of alcoholism rather than face the possibility that his ostensibly platonic love for his college football teammate Skipper was anything but “clean.” Even on the basis of the bowdlerized script that premiered in 1955, critics of the time were far more eager to brand Brick as a latent homosexual than Williams ever was; indeed, his final revision of the play, which is being presented here, contains still more vehement denials, albeit couched in homophobic language that further suggests the lad doth protest too much.

Surprisingly, Brick’s wife, known as Maggie the Cat, and even his father, whose lack of familial affections is otherwise monumental, prove far more accepting. Big Daddy actually displays more respect and affection for the memory of the male couple who mentored him than he does for anyone who appears onstage. One of those men, we learn, was named Jack Straw, and surely a poet like Williams, who has already alluded to the Egypt of Exodus, would have us recall that it’s virtually impossible to make a brick without straw.

But Maggie may exceed them all in her capacity for dissembling. Like the cat of the title, she’ll do anything she thinks necessary to survive, and that survival hinges on holding onto Brick as her spouse, regardless of his orientation or even his oft-stated contempt for her. These two seem to have struck a bargain, based on the fact that as much as they may annoy each other, they despise everyone else even more. Act I amounts to an extended satirical riff for Maggie, which Stephanie Gibson delivers with all the vitriolic relish of a stand-up comic, while Andrew Pastides, as Brick, plays her straight man in more ways than one.

I’ve seen needier Maggies than Gibson, not to mention more sultry ones and ones who had a better command of the Southern accent, but I can’t recall another so clear-eyed about how peripheral she is to Brick’s life, yet remaining so hell-bent on enduring the heat on the tin roof with him, nonetheless. For his part, Pastides draws our eyes even when he’s trying to fade into the woodwork, and though he first responds to Maggie’s tirade grudgingly at best, he ultimately succumbs to giggles that manage to sound both hollow and impishly complicit. 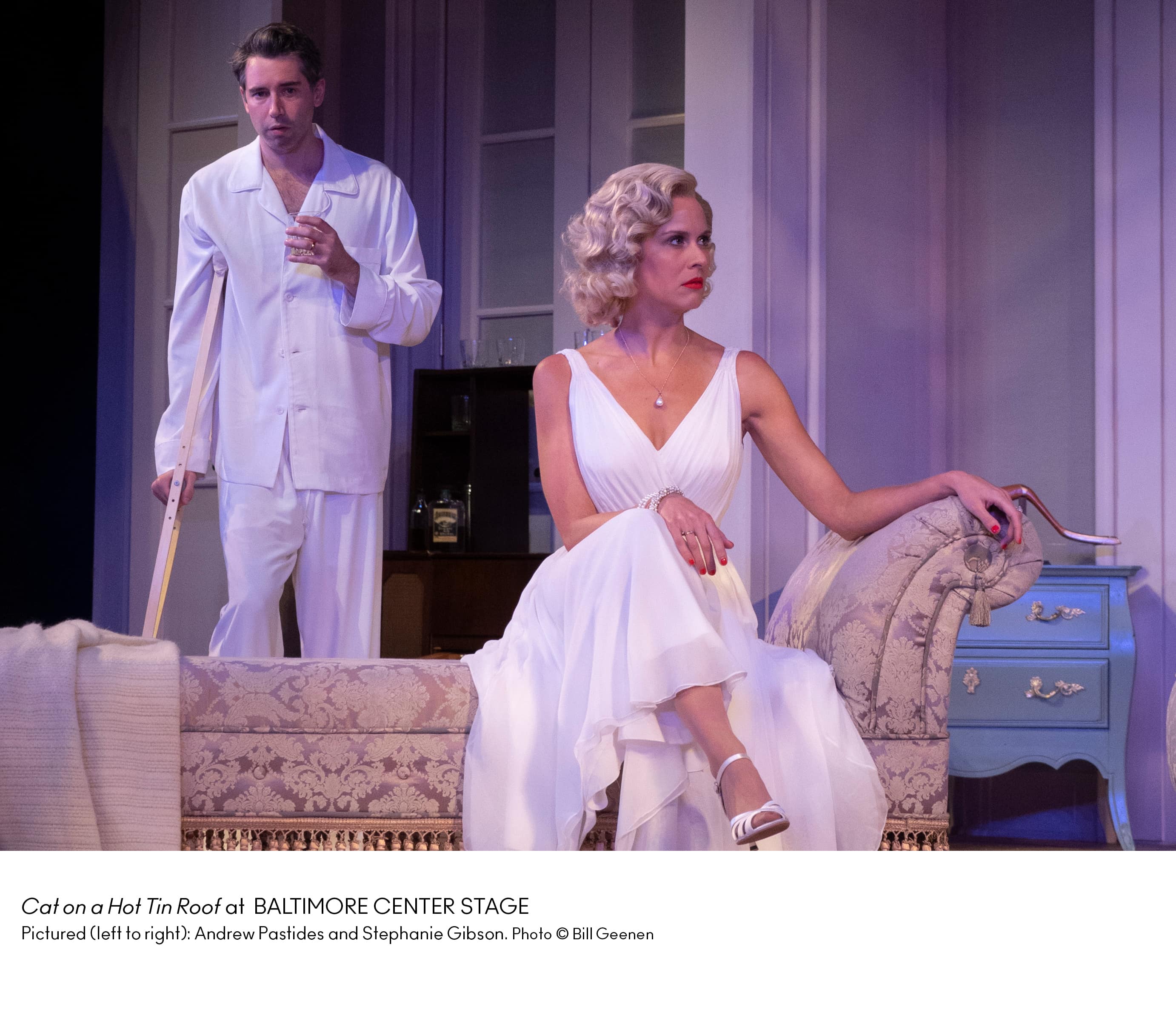 Sure enough, when they’re visited by his sister-in-law and Maggie’s chief living rival, the fecund yet prudish Mae (Alexis Hyatt), Pastides’ Brick launches into a comic routine of his own. Still wrapped in a towel after his shower, he surreptitiously flashes her – a prank intended to expose her hypocrisy, but which also establishes him as a sexual tease, for all that may imply about his relationships with both Maggie and Skipper.

This bit of business is but one of many from the fertile mind of Judith Ivey, a two-time Tony Award-winning actress making an equally tony directorial debut at Center Stage. As a performer, Ivey specializes in comic characters who gradually reveal deep wells of pain, and she inspires her actors to dredge similarly deep here. The horseplay they indulge in is often hilarious, but when the laughter fades, it’s as jolting and potentially life-threatening as being thrown from a horse. Better yet, under her guidance, this ensemble earns the same accolade Walter Kerr gave to Elia Kazan’s original Broadway troupe, “You’ll believe every word that’s unspoken.”

Among the stellar supporting cast, I must single out Rod Brogan as Brick’s hapless brother, Gooper, a man always trying to do the right thing for the wrong reason or vice versa, and usually failing on both counts. Brogan makes us feel for Gooper even as we’re laughing at him and helps us understand why he remains so disliked even when that seems unmerited. There’s a chilling moment toward the end when we realize that Gooper, just like his more popular brother, has inherited a bit of his father’s sadism along with an excess of his mother’s masochism, and we sense that the battle between the two is no less wounding for him, even though he “never made a show of it.” 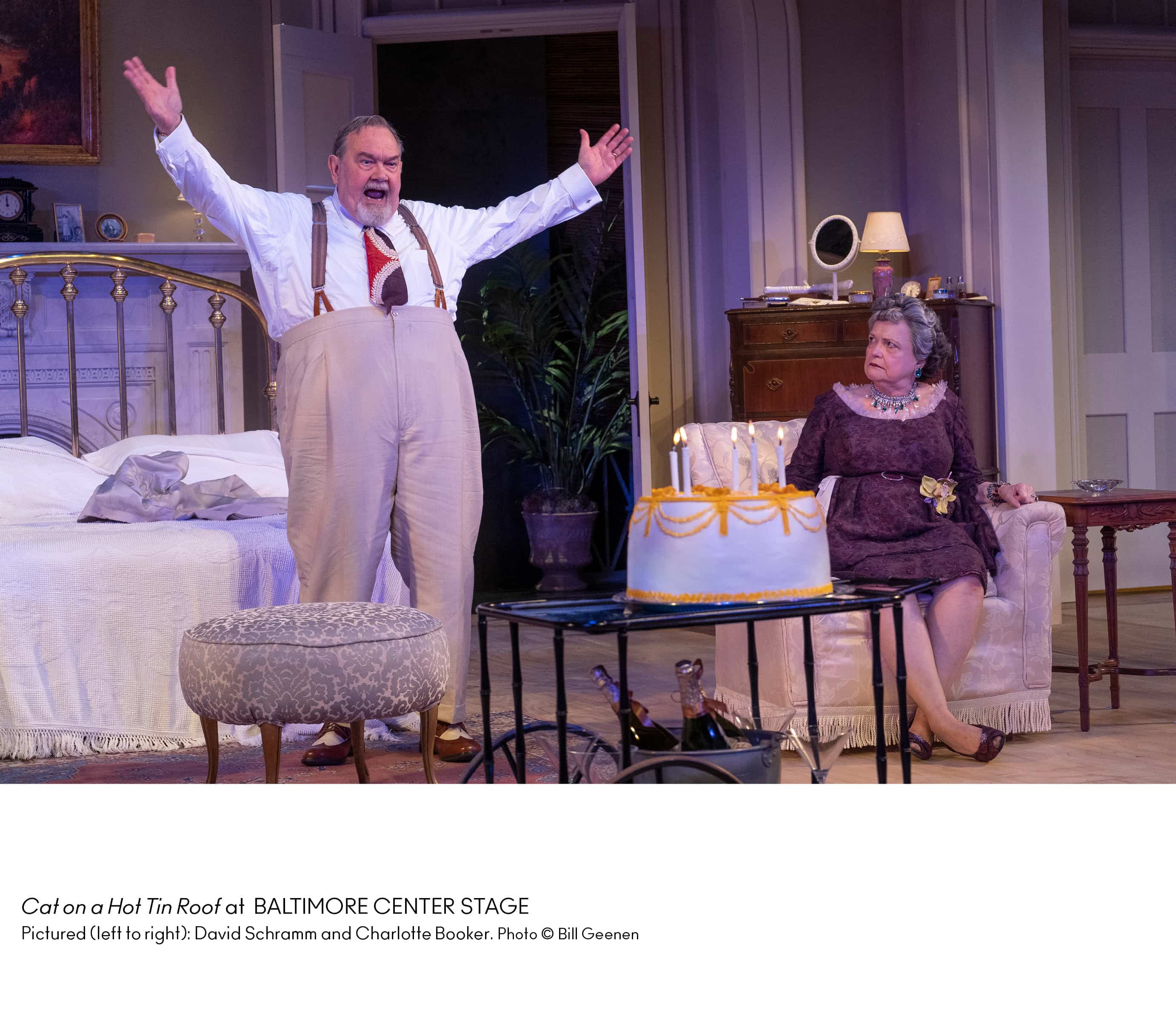 As Big Daddy, David Schramm is made up to look uncannily like Burl Ives, the originator of the role, and he also shares his predecessor’s seemingly boundless good humor that can turn lethal in the twinkling of a cat’s-eye. His casual cruelty, as when he spitefully swatted Brick’s broken foot, drew gasps from the audience on opening night, but not without a note of awe, as befits a dying king. And Schramm evokes pity as well as terror, notably when he believes his doctor’s prevarication about his prognosis and nearly dances with boyish joy about all that lies ahead for him, only to have the roof cave under him at the first spasm.

It may be easy to underestimate his consort, Big Mama, but it would be hard to overestimate Charlotte Booker’s grasp of the character or the queenly skill and charm with which she conveys it. This is a woman who keeps her cards close to her vest, but to her sorrow, she wears her heart on her sleeve. Her response to even the worst abuse from her husband is, “I know you didn’t mean it in your heart,” a self-deception that elicited an audible sympathetic sigh from the gallery, like the exhalation of that aforementioned gasp, as if to confirm that these two people are as necessary for each other as breathing, no matter how much Big Daddy refuses to admit it.

That dynamic is mirrored, for better or worse, in the marriage of Brick and Maggie – a reflection that Brick’s original final line, now restored to the script, makes all too clear. Ivey elevates that moment to tragicomic grandeur with her final stage picture, an attempt at connection that is both awkward and graceful, seductive and chaste, tender and insincere.

The dichotomy is also evident in Adam Koch’s luxuriously unlivable set (Adam Koch). Characters can’t help eavesdropping or making inopportune entrances through its diaphanous walls, yet they remain confined, from the world beyond and from each other, as if in transparent but never easily accessible cages, gilded though these may be. What’s more, although the gorgeous décor is tastefully arranged, there’s something off about the placement, most obviously in the way the head of the bed stands before the fireplace, as it never would in a real home. Still, that position seems oddly fitting for a family afflicted by strange fevers, yet who never have the pleasure of seeing their desires catch fire. Fortunately, you have until October 14 to see their passions blaze, and it’s enough to set any viewer’s heart aflame.

Running Time: Two hours and 30 minutes, including one intermission.