How To Win a Race War—a whopping 3-hour, 15-minute ordeal—indulges in the world of white supremacy, wheels and deals in astoundingly racist and horrifying caricature, and expects a pat on the back for doing so. Its all-white, all-male cast performs a master class in racism, homophobia, sexism, and anti-semitism.

Written and directed by Klunch Artistic Director Ian Allen, How to Win a Race War brings to life Black characters who are only violent, animalistic and completely motivated by carnal instincts, Jewish characters who are solely motivated by money and power, and bereft of any soul or empathy, and female characters who lack agency and intellect and only exist as sideshows. This is not the stuff of microaggressions. It’s blatant, horrifying stereotyping that nobody should have agreed to create.

Here’s how Anderson Wells, the assistant director and music producer justifies it: In a Q&A with DC Theater Scene, he says the play is framed as a parody of white supremacist literature, and he feels the show is acting for the public good, helping increase understanding of white supremacist inspirations and rhetoric. The actors are not being racist themselves, but playing racists who are acting.

Folks don’t fight long and hard for accurate representation to have their identities caricatured and mocked as some sort of unnecessary thought experiment in white supremacist ideology. These portrayals didn’t supposedly fall out of the mainstream because they’re unseemly or inaccurate, but because they’re dangerous, and have been used to justify genocides for generations. What conversation does it serve to bring them forward?

And to be effective parody, there’d have to be some indication in the actual show that it was, in fact, parody. Here’s the solution they came up with: A few times during the show, an actor would ask another if they had forgotten a line—not because they had, but because they wanted to remind the audience that they were playing racist actors! Aside from that, the only punchline to this parody seems to be just how offensive the caricatures, how many times they can yell the n-word, how many sexual assaults they can show. Are you laughing? I’m not.

Let’s get into some of the details. The three acts of the play all represent different aspects of white supremacist lore or fiction. The first portrays a slave uprising in antebellum Virginia. The second, a 1990s race war that ends in the world’s destruction. The third, a futuristic society in which the tables have turned until a rebellion changes everything.

Music director Anderson Wells has the cast jumping into song often, from the slave uprising rendition of Ludacris’ “Move Bitch Get Out Da Way,” to the futuristic white-power rendition of The Beatle’s “Revolution.” The numbers are largely well sung—though the cast stays in racist character—and Connor Padilla’s voice, particularly, stands out.

Set designers David C Ghatan and William Spencer transform the little space from a 19th-century plantation to a futuristic spaceship, and more. All it requires is a couple of chairs, two large boxes and a projector screen in the background which sets the scene. It leaves a lot to the imagination.

Likewise, the costumes, designed by Mei Chen, certainly rely on imagination. My personal favorite was the antebellum female slave dressed in athletic shorts and a t-shirt with the sleeves cut off.

Perhaps better stage development could have made the second and third acts easier to follow. But as it stood, the storyline underpinning the immense racism was convoluted and confusing. Perhaps that was the point, to show that the white supremacists and their stories don’t make any sense. If that was part of the parody, though, it would have been served by some sort of nod from the actors to the absurd nature of the storylines. It’s one missed opportunity that could have further separated the creators from the racism they ended up espousing.

And even if that had been perfectly executed, it doesn’t change the fact that the conceit of the show was fundamentally flawed. It’s important to interact with and understand white supremacy at its worst, to see how it manifests. That’s why movies like 12-Years a Slave and books like Night, were so successful and important.

The main difference is that they present an essential foil to the dangerous and harmful rhetoric—a humanity to the oppressed that transforms the narrative. This show does the opposite. It’s just three hours of roughly a dozen men romping around, yelling the n-word, enacting horrifying sexual assaults and portraying marginalized groups as un-human. It’s dangerous, and frankly, we get enough of that in reality already. 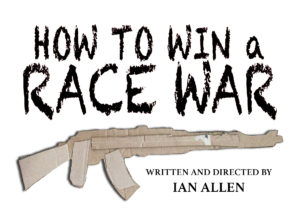 See my colleague John Stoltenberg’s Magic Time! column about How to Win a Race War.