You won’t need them, but you’ll want your umbrella and your dancing shoes when you see 2nd Star Productions’ Singin’ in the Rain. Oh yes, that beloved ‘40s classic movie musical has been formatted for the stage and is available to community theaters across America.

Arriving at 2nd Star’s home, the Bowie Playhouse, involves a drive into Whitemarsh Park, past several sports fields to a parking lot by a wooded area, then a walk up a long pathway to the theater. Spike heels might be the wrong choice. Bringing your mom would be the right choice.

Originally launched in the mid-’80s, the stage musical had a few fits and starts, revived in London once in the ’90s and again in 2012. A 2015 Paris production was slated to move to Broadway in 2016, but the move never materialized. 2nd Star’s production of Singin’ in the Rain is a sweet homage to the movie. Choreographer Andrew Gordon clearly takes much inspiration from Gene Kelly’s original movie choreography, with adaptations to suit the venue, the cast, and the audience.

The action and dialogue of the stage musical remains faithful to the movie, with the book written by Betty Comden and Adolph Green (the movie’s original authors), with lyrics by Arthur Freed, and music by Nacio Herb Brown. None of the musical “embellishments” by other artists which had been added to the 1983 stage recreation have survived to the current cut, so there’s a certain purity to the piece.

Director Allison Erskine and the production crew of 2nd Star carry off the switch from big screen to small theater with panache, love and excellent effort. The staging is imaginative and appropriate, with evidence of multiple working parts coming together smoothly: blocking supports vocals, vocals support character, characters are comfortable on the set pieces, set design permits flexible staging, staging supports choreography and choreography is and has always been foundational to Singin’ in the Rain. The whole thing just works.

The singing is lovely, and not overpowered by the wonderful live musicians in the invisible understage orchestra, so kudos to Music Director Sandy Griese. She’s working with some superlative voices, including 2nd Star newcomer Emma Godfrey as Hollywood hopeful Kathy Seldon. Godfrey is smooth, confident and wonderfully expressive. She and leading man Jeffrey Hawkins as Don Lockwood have excellent chemistry and lovely duet numbers. Hawkins’ Lockwood is conceited but likable, with every bit of the dancing skill required of the role.

Robbie Dinsmore’s snappy timing and sassy delivery are a highlight of his portrayal of Don’s best pal, Cosmo Brown. Mostly non-verbal but extremely noteworthy are a trio of featured dancers, the engaging Tyler McKay White, the impressive Debra Kidwell and the elegant Andrew Gordon, who also choreographed the show. As irritating leading lady Lina Lamont, Katrina Sillaman inhabits the character with heroic acting chops and is a delight to behold. Solidly supportive in each of his characters, Wendell Holland brings a calm stability that balances the exuberant activity of younger cast members. Julian Ball as movie executive R.F. Simpson is appropriately stuffy and blustery, and Peter Deford is a wonderful comic foil as the Diction Coach.

Production values vary. Technically, this is a very ambitious show to begin with, including multiple setting locations, expected effects, choreography that was difficult even for the original Hollywood stars to pull off in multiple takes, (Debbie Reynolds described long, grueling shoots and bleeding feet), plus singing, comedy, and slapstick. As a result, some numbers are more effective than others: “Make ‘Em Laugh” feels a bit forced, but “Moses Supposes” is terrific and “Good Morning” is everything one could wish.

Actors are not miked, yet are perfectly audible and understandable. Brian Reynolds delivers a specific set of very special effects, which work beautifully and are quite funny. Mary Wakefield’s costuming shines throughout, and the way Kathy Seldon’s gown moves in “You Were Meant For Me” is a visual treat.

Set design by Jane Wingard retains some of the movie’s iconic structures, but keeps the set fairly modular and simple. Scene changes happen in blackout, sometimes with actor assistance. The lag is minimal, but it does slow the pace a little. The titular scene incorporates one iconic element from the movie, but certain other elements are lacking, and the sequence seems unfinished; perhaps it will be augmented during the run. An excellent set detail is a beautiful painting “hanging” in the home of R.F. Simpson. Overall, even when the tech falters, the audacious attempt is admirable. When it succeeds, it’s nothing short of brilliant.

Foreknowledge of the movie is not required; young viewers and old should enjoy this fun musical romp. From the Overture Opening, a Hollywood-esque big Big Dance Production Number, to the Ensemble Finale, Singin’ in the Rain gleams with star quality and practiced polish. 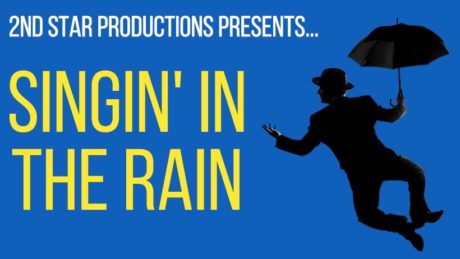 Running Time: Two hours and 25 minutes, including a 15-minute intermission.