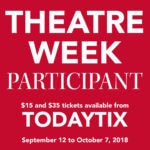 In Lincolnesque, a play written by John Strand and directed by Colin Smith, the art of lying for one’s country succeeds in fusing a deceptively light touch and inside-the-Beltway political humor with profoundly deep messaging that goes straight to the heart.

It’s midterm election time in Washington, D.C. and the polls are dismal for Congressman Dave Carpenter. Enter Leo, his new speechwriter (with a speech impediment for comic effect) and Carla, Leo’s ballsy chief of staff boss droned from corporate to save the day. The problem is that Leo has run out of words and Carla is so frantic to win the election that brain fog is stymying both of them.

Francis is Leo’s whiz-kid older brother who took a turn for the worse after being a genius strategist, and following a stint in St. Elizabeth’s is back in society under Leo’s care working as a janitor. Even though he’s been released from the psych ward, Francis is delusional and believes that he is the reincarnation of Abraham Lincoln. And to win the war, he speaks the inspirational words of Lincoln to lend truth to power with everyone in his lofty orbit.

But words have power, as Lincolnesque’s rich dialogue eloquently makes the point through quotations of Abraham Lincoln projected by Sound/Projection Designer Veronica J. Lancaster onto Matthew J. Keenan’s splendid set design, reminiscent of the Oracle of Delphi in ancient Greece. Tall Grecian-inspired columns capture the words of The Great Emancipator as Francis dons a long, black, vested waistcoat by Costume Designer Kiana Vincenty to emulate the gravitas of antebellum times through his measured, heroic words.

John Strand weaves in pithy humor and plotted twists and turns to lighten things up as Leo and Carla crib Francis’ “Lincolnesque” citations to write the final campaign speech that takes them over the top to win the election. Through the power of inspiration, idealism, and “E&I” (ethics and integrity—morals that Leo and Carla sorely lack) they travel the high road to success by taking the low backroads only to wind up in an inevitable aftermath.

Brandon McCoy as Francis brings a boyish innocence to his delusional grandeur. What’s so remarkable about his characterization is that he has Lincoln’s super tall, lanky physique.  All he needed was a black stovepipe hat to top off his easy portrayal of arguably the greatest President of the United States. His character seems to grow in believability as the plot thickens, particularly when he gets angered by Leo and Carla’s underhanded trickery to use his (stolen) words, and he retorts in the booming cadence of Abraham Lincoln.

Michael Innocenti gives a great turn as Leo, the struggling speechwriter. His tough love for Francis is palpable as Lincolnesque depicts deep affection between brothers through their touchingly caring relationship. Innocenti roars like a lion but underneath is gentle as a lamb.

Susan Marie Rhea’s Carla is everyone’s worst nightmare of the driven corporate bombshell hell-bent to succeed in the political arena at any cost. She plays this part to the hilt with high energy and sassy nerviness, but enough vulnerability to make you like her at least a little bit.

Stan Shulman is Francis’s imaginary Secretary of War, a down-on-his-luck street peddler who doubles as Harold Daly, the wealthy owner of the building where Francis janitors.  Shulman plays both with the street-smart confidence of a New Yorker and the ruthlessness of a Roy Cohn lookalike. Their personalities seemed to merge, however, into the same character, though totally different roles.

Francis’ center-stage monologues, given a greater edge by Megan Thrift’s dramatic spotlighting, are some of the most uplifting moments in this production. It’s hard to deny that what comes from the heart goes to the heart. Leo’s cries for “no more name-calling and no insults” touch the core of heartfelt integrity as he goes low and steals Lincoln’s words to satisfy “a nation that hungers for heroes.”

Lincolnesque has a fast-paced breeziness that is entertainingly fresh. But the quick wit and full-tilt funniness belie the philosophical wisdom and paradoxical soberness that dig into the current morass of politics today as we slip and slide away from the moral high ground of Lincoln’s time. It makes you fear with trepidation where we might be headed if we continue to lose our moral footing.

Running Time: Two hours and 10 minutes, including a 15-minute intermission.