What more suitably provocative venue for VANJARI than Don’t Tell Mama? Established on Restaurant Row in 1982, the popular piano bar, cabaret, and restaurant takes its name from the spirited song in Kander and Ebb’s blockbuster musical Cabaret, in which Sally Bowles directs the audience to keep her scandalous life as a nightclub singer a secret from her mother. But unlike Sally, Ariana Johns (who started out doing stand-up and improv comedy) doesn’t have to worry about her mom, Evangeline Johns (who began her own show-biz career performing in the Copacabana chorus line), finding out about her work – she’s half of the act!

Presented by Vampingo Productions, VANJARI (a contraction of the Johns women’s first names) returned to Don’t Tell Mama’s backroom stage for two dates in September (following a sold-out debut in July) with their latest mother/daughter cabaret. The set list consisted of a mixed bag of favorite songs from both generations and some lighthearted verbal sparring and familial affection between the two, which they were obviously enjoying every bit as much as their fans did.

The pair’s amusing banter provided introductions to the songs, bracketed by opening and closing numbers that captured their close personal and professional relationship (“Two Peas in a Pod” and “The Apple Doesn’t Fall Very Far from the Tree”). Accompanied on piano by Musical Director Darryl Curry, who provided some terrific back-up vocals while masterfully tickling the ivories, the duo performed a total of sixteen standards and original works (“A Certain Age” from their new musical Buzz, Son of a Bee . . . An Actor’s Life for Me – a collaboration with Curry, who wrote the music; and “Marilyn” – a spoken word tribute to Marilyn Monroe, written by Evangeline, with the women delivering the heartfelt alternating verses).

Among the highlights were a lively duet on “Java Jive,” accentuated by all the right period-style moves, and a medley (suggested and arranged by Curry) of Evangeline singing “Autumn Leaves” interwoven with Ariana’s vocals on “California Dreamin’” (reminiscing about the state where she was born). There were also entertaining solos on the laughingly creepy “Ave Satani” by the daughter, which she joked was one of her early audition songs, and the mother’s homage to New Orleans voodoo queen “Marie Laveau,” in which she put mock curses (“another man done gone”) on some male members of the audience (staging by Max McGuire and Mark Mindek).

If you missed the VANJARI dates at Don’t Tell Mama this time around, you can expect a return to their long-time favorite cabaret in the future, and there’s also been some talk of them recording a CD and video of songs from the show. 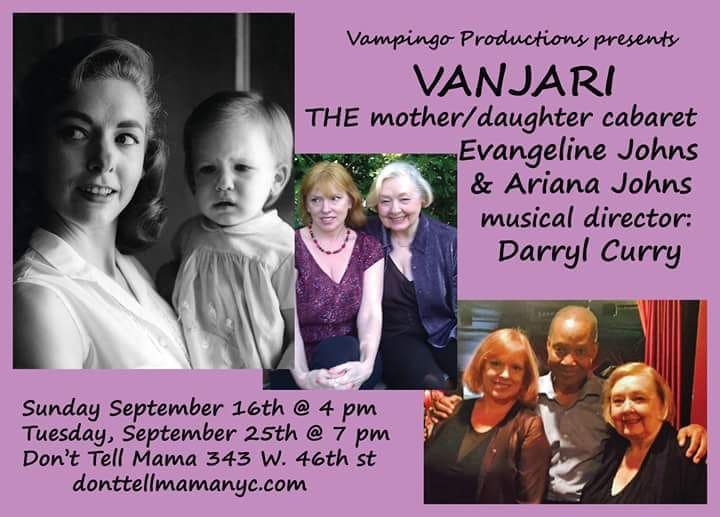