A mash-up of romantic comedy, sci-fi parody, and rock musical, The Eleventh Hour, with book, music, and lyrics by David Seamon, is back at Town Stages for a limited engagement presented by Smugbug Productions. Originally commissioned by coLAB Arts, a community advocacy and development organization based in New Brunswick, NJ, the show pays homage to its hometown with a quirky and uneven apocalyptic story of love and destruction that traverses the suburbs (and the NJ Turnpike) to New York City and across the universe to a dangerous black hole in space that threatens to swallow up Earth.

Nevin (portrayed by Henry Fisher) is the lead guitarist in a New Brunswick basement band, who has no desire to leave home, out of fear that he might “crash and burn.” His girlfriend Amy (Miranda Luze) is an ambitious budding astrophysicist, who wants to move to New York to further her career. Their opposing trajectories cause problems in their relationship, but not as much as the catastrophic cosmic event that could bring an end to life as we know it. Can they come together to save us, themselves, their love, and his music before it’s too late? 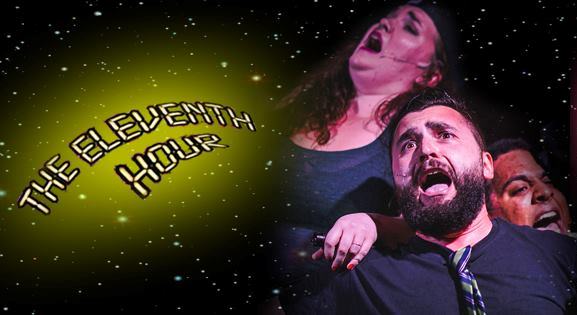 The low-budget production, using mostly street clothes and a few makeshift costumes and toy props (design by Mary Gragen Rogers) is presented on a low and narrow runway stage, within millimeters of the audience seated on both sides. Director Jessica Francis Fichter moves the ensemble actively up and down the narrow platform, through openings in the intimate seating area, and beyond our sightlines, utilizing the full space of the room and video projections throughout to suggest the different locales. Choreography by Ginny S. Haynes is also lively, in scenes of dancing, singing, playing guitar, and fighting, all of which the ensemble executes with vitality. But at the performance I attended, there were technical issues with the live video feed and sound (by Dustin Ballard), and lighting (Zachary M. Brienza) that sometimes missed the mark, which underscored the unpolished fringey quality of the overall presentation.

Clever rhymes (calling out “Jersey, a place that doesn’t deserve me”) and witty lines (Leslie, played by Brianne Wylie, wants to get the band together one last time before the planet’s imminent doom, for, “Literally – and I’m using that correctly – the ultimate basement show”) punctuate the book and lyrics, and a faux-scholarly explication of the “spaghettification” of the universe by star astrophysicist Dr. Neil DeGrasse Tyson (the outstanding Olivia London) is absolutely hilarious. The mostly sung-through musical (with music direction also by Seamon) highlights the playing power of the rocking four-piece back-up band (Skyler Fortgang on drums, Emily Goggin on piano, Chris Neptune on guitar, and Greg Salmon on bass) and the solid voices of the performers (rounded out by the terrific Christopher Pasi as a Knight from “Medieval Times” – an immersive dinner and entertainment spectacle in Lyndhurst, NJ, inspired by the Middle Ages – who “won’t break character” and Joshua D. Simpson as Dr. Tyson’s insecure intern, who is painfully aware that he’s an outsider).

While there is no question that the cast of emerging artists has talent and is fully committed to the material they’ve been given, the second half of the show becomes increasingly tedious, far-fetched, over-the-top goofy, and inordinately confusing (even for a rock-and-roll sci-fi farce). With the introduction of the mole people that live below, the battle with a giant snake made of flexible ductwork, a decapitated head and hands, inexplicable subplots that go nowhere, and an ending that comes too abruptly and from out of the blue, the production, which gets off to a rollicking start and has more than a few funny moments, is in need of much greater focus and editing.

If you’re going to Town Stages for The Eleventh Hour, plan to arrive a half hour early for the pre-show entertainment. Each night features a different act (I was fortunate to see an uproarious stand-up comedy routine by the creator’s brother Kevin Seamon). 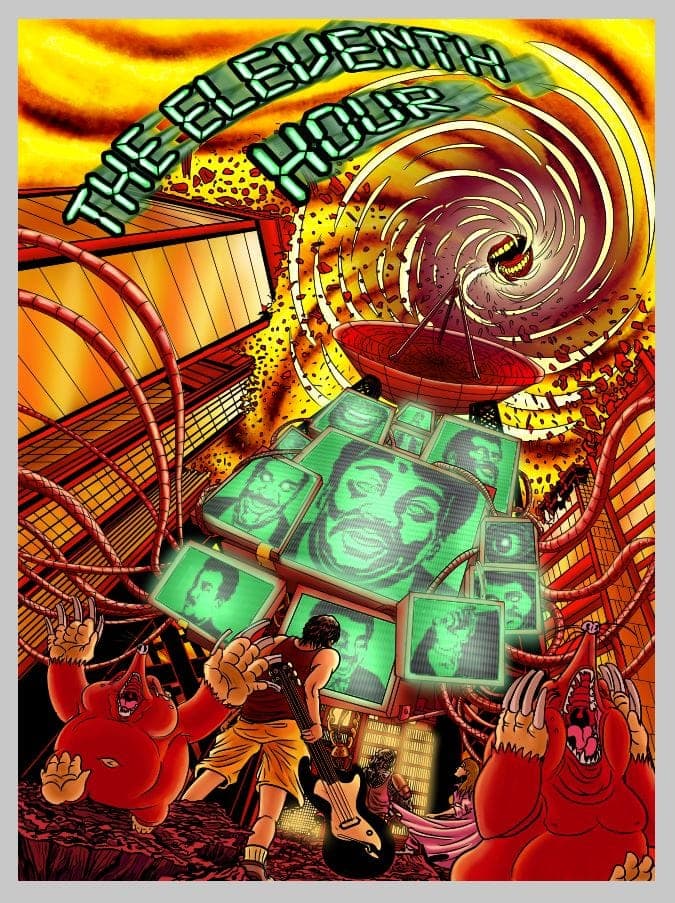