In the cue game of snooker, the British version of pool, the nap refers to the rough-surface direction of the fabric covering the table, which affects the path of the ball. In Richard Bean’s irreverent comedy The Nap, now in its American premiere on Broadway at the Manhattan Theatre Club’s Samuel J. Friedman Theatre, it also applies to the rough underbelly of gambling and game-fixing, and to the outrageously underhanded activities of the fictional competitor’s disreputable extended family, which could have a disastrous effect on his rising career.

Directed by Tony Award-winner Daniel Sullivan, the show opens at an unnecessarily sluggish pace, as we are slowly introduced to the colorful cast of characters (and I do mean characters!) from the seamy side of Sheffield. The central protagonist, portrayed with irresistible charm and sincerity by Ben Schnetzer, is Dylan Spokes – a committed and principled young snooker star, preparing to compete in the prestigious World Championship tournament. He is joined by his father, a coarse ex-con repeatedly at a loss for the right word, movie title, or actor’s name (played to perfection by John Ellison Conlee), who is present when the authorities – an over-enunciating Mohammed Butt (Bhavesh Patel) and a flirtatious Eleanor Lavery (Heather Lind), with whom he shares an attraction – enter the dilapidated hall to take a urine sample and to give him a warning about throwing his upcoming match.

The tempo, and the series of twists and turns in the preposterously risible plot, pick up with the increasingly hilarious arrivals of Dylan’s pushy sartorially-challenged manager Tony (Max Gordon Moore), his cheeky mother Stella (Johanna Day), her Irish boyfriend Danny (Thomas Jay Ryan), and her nouveau-riche malapropism-spouting transgendered ex Waxy Bush (the smashing Alexandra Billings, in a scene-stealing Broadway debut). The ensemble of actors is joined by the actual four-time United States National Snooker Champion Ahmed Aly Elsayed, who, in a non-speaking role, competes against Dylan in a pair of matches – one combining live action with time-lapse video, the final played out on stage in real time, with the possibility of two different endings, depending on who makes the shots. Both are projected, for full visibility from the audience, in a bird’s-eye view on a large-scale overhead screen, and accompanied by sidesplitting play-by-play voiceover commentary.

Filled with foul-mouthed English lingo and often off-color descriptions, the script is a no-holds-barred parody of the high-stakes danger and seediness of the underworld of gaming and gangsters. Some of the jokes hit hard, others fall flat, the feigned English and Irish accents (with dialect coaching by Ben Furey) are occasionally difficult for an American audience to understand, and the romantic storyline between Dylan and Eleanor seems forced, improbable, and out of place with the overall comic tone. But, in general, Bean’s latest work will have you laughing at the eccentric characters and gasping at the surprising plot-points and unforeseen thrills of their story.

The action is supported by a top-notch design, with an expressive and efficient changing set by David Rockwell, flamboyant character-defining costumes by Kaye Voyce, with hair and make-up by Anne Ford-Coates, and startling fight direction by Thomas Schall.

If you’re in the mood for a loopy look at game-scamming, a lesson on snooker, and a laugh, The Nap provides an entertaining evening of British-style humor and social farce. 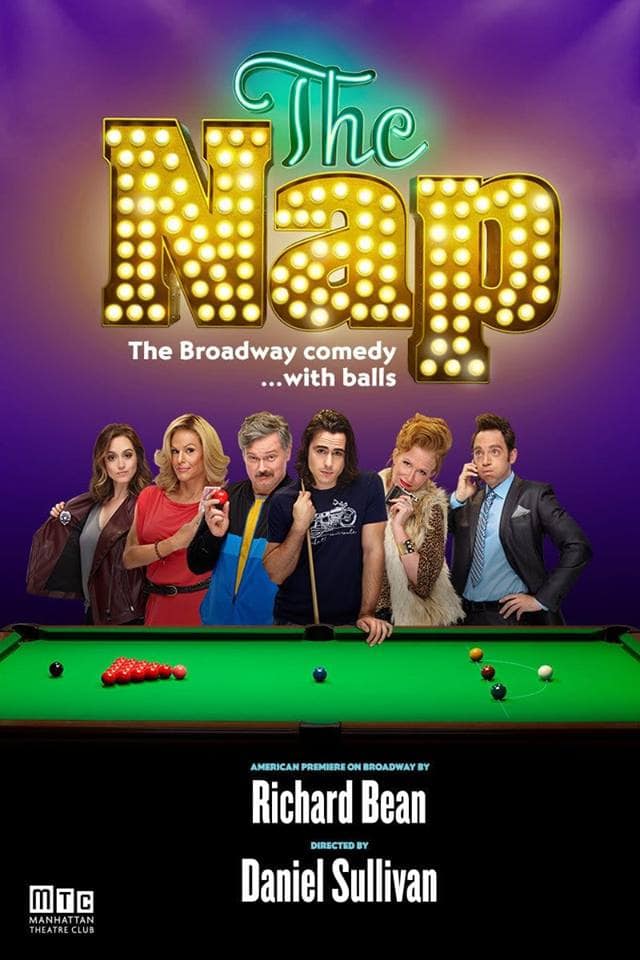