Brave Soul Collective is a hidden gem of theatrical truthtelling about black men who are LGBTQ. Periodically the collective surfaces with a one-night-only showcase of work by local writing and performing talent that if you blink you might miss. Impressively conceived and produced by Monte J. Wolfe, these collections of short plays unfailingly offer insight into what outsiders might consider a niche but those inside it know as life.

What distinguishes the Brave Soul Collective esthetic is a sensitive, unsensational honesty that risks not reaching for laughs yet consistently reaches the heart. I’ve witnessed this emotional realism in programs such as Plot Twists (DC Black Theatre Festival) and Tenfold: An Evening of Brave Soul Performances (Kennedy Center Page-to-Stage Festival). BSC presented its most recent program at the Anacostia Arts Center on the occasion of National Gay Men’s HIV/AIDS Awareness Day and the We Will Be Heard National Day of Action.

Following are the plays and credits with brief notations to give a sense of the breadth of emotional relationships and topicality—HIV/AIDS, family, sex, dating and relationships, substance abuse, mental health. Progressing from quiet intensity at the beginning to more and more dramatic force, Safeguards included some especially stunning works in the second part.

Donuts & Dilemmas
Performed by Darrell Evans & Monte J. Wolfe
Written by Jared Shamberger/Directed by Monte J. Wolfe
“Do we really need to get married?” After years of living together, Mitchell and Van confront what it means to keep one’s word.

Just Between Us Guys
Performed by Brave Soul Ensemble
In a scene played with the spontaneity of polished improv, members of a support group for black gay men that has been meeting for six months try to figure out how to move forward.

In the Chair
Performed by Keanna Faircloth & Jammine Nance
Written & Directed by Monte J. Wolfe
“How many gay clients do you have?” In his first-time visit to a psychotherapist, a young man named Clayton (“CJ”) discloses his isolation, his parents’ nonacceptance of him, and his longing to connect with “a normal regular dude.”

Chance of a Lifetime
Performed by Anthony Green, Michael Sainte-Andress, Rodderick Sheppard & Monte J.  Wolfe
Written & Directed by Alan Sharpe
An older man who lost scores of friends to AIDS but “dodged the HIV bullet” has now turned inward, selfishly surrounding himself with possessions and living a solitary life in suburbia. In a magical realism twist, he is visited by three of those deceased friends, who have come to do an intervention: to get him to stop wasting time and squandering his life.

When the Smoke Clears
Written & Performed by Yarde Noir
“Who am I without tina?” asks a young man, referring to his addiction to crystal meth—which, he realizes, is “a trip to wonderland” but not a way out of his isolation.

Stealth Bombs
Performed by Jason Evan Barrett, Keanna Faircloth & Anthony Green
Written & Directed by Monte J. Wolfe
A meeting between two exes who broke up over unfaithfulness leads to an apology and the revelation of a bigger lie: a drug addiction kept hidden.

For Colored Gays
Performed by Jason Evan Barrett, Anthony Green, Jammine Nance, Yarde Noir, Rodderick Sheppard & Monte J. Wolfe
Written by Anthony Green / Directed by Monte J. Wolfe & Anthony Green
“A black gay man / Has a better chance of contracting the virus / Than going to college / Than staying out of jail / Than finding real love.” A theater piece of extraordinary power and beauty, a poetic montage about same-gender-loving black men in the matter of Ntozake Shange’s for colored girls… and Word Becomes Flesh by Marc Bamuthi Joseph. Here, for instance, is the first impassioned monolog, from a gay son remembering his mother’s rejection of him:

The first time you cut me scarred the worse
I’d exposed my insides to you, my mother
Yet you dismissed me with a quick
As long as you don’t get Aids
A sudden jab that barely cut the skin
No blood was lost

The rest of Anthony Green’s For Colored Gays is just as electrifying. The piece cries out to be produced again.

Left Behind
Performed by Darrell Evans & Patricia Williams Dugueye
Written & Directed by Alan Sharpe
“No son of mine is going to be a faggot.” The estranged mother and father of a young gay man meet after his memorial service. He committed suicide. The father has the young man’s ashes in a CVS bag. The young man’s name was CJ—the character we met earlier seeking help from a shrink. Recriminations are exchanged, about their son and their failed marriage. The mother, a bishop, tried to get the boy into conversion therapy. The father would have none of that. They bicker bitterly, then, in a gut-punch ending, they exit in opposite directions…leaving the CVS bag behind.

Voices
Performed by Brave Soul Ensemble
Written by Monte J. Wolfe
“Love. Understanding. Respect. Love. We all just want to be heard.” A chorus of brave souls brings closure to a moving evening. 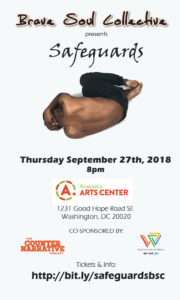