In his classic acting guidebook Audition, Michael Shurtleff observed, “A murderer kills just one. A suicide kills the whole world.” Marsha Norman acknowledges as much in her Pulitzer Prize-winning play ‘Night, Mother, now receiving a harrowing revival by the Strand Theater Company. 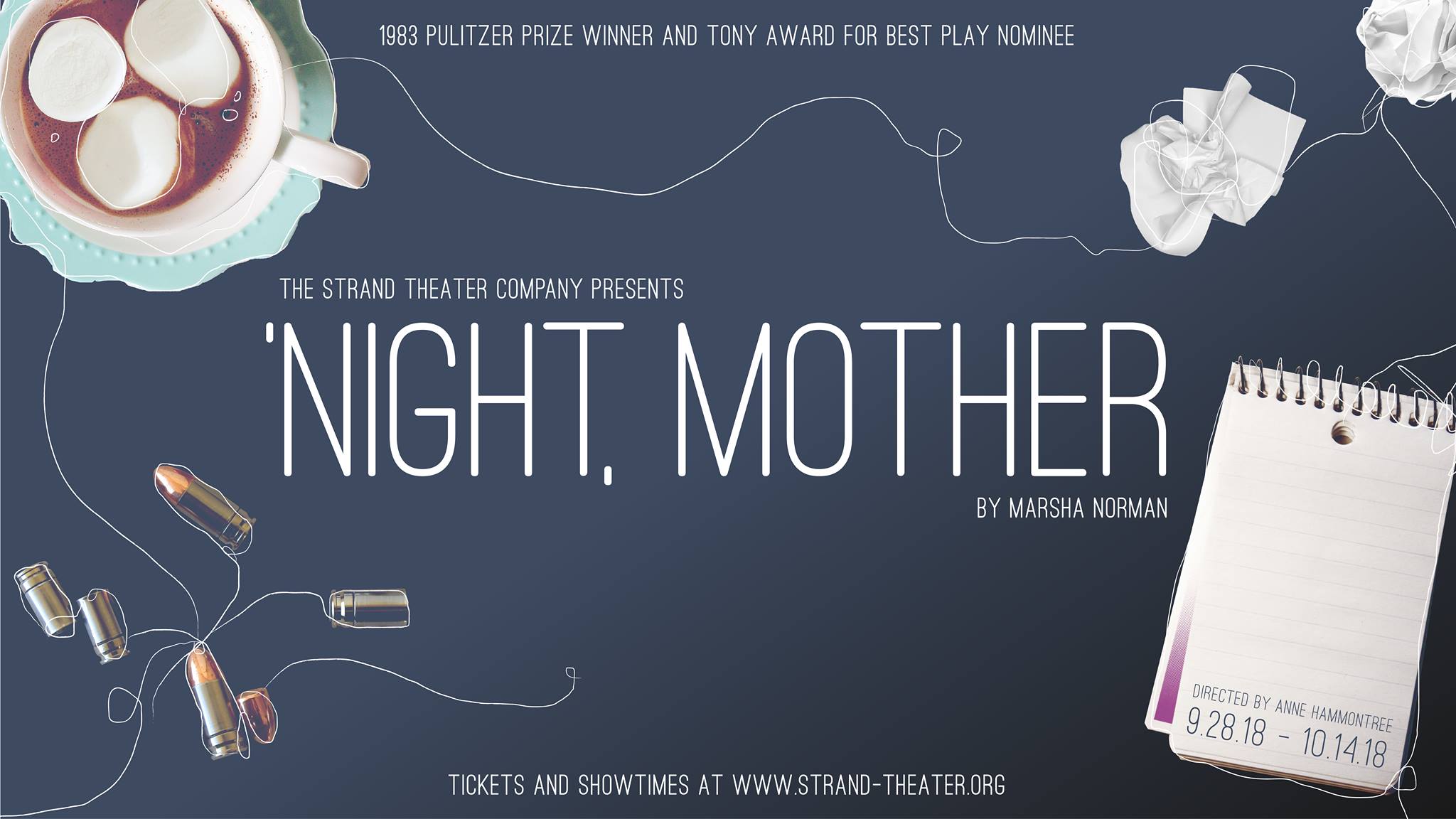 Early in the play, Jessie (Andrea Bush) matter-of-factly announces to her mother, Thelma (Kathryn Falcone), that she intends to shoot herself later that evening. Shortly before that, when asked what she needs a gun for, Jessie had answered, “Protection” – a chilling reminder, in light of her subsequent revelation, of the many historical occasions, from Masada to Jonestown, when defeated people have taken their own lives rather than face what they thought would be an even worse fate at the hands of their enemies.

But who are Jessie’s enemies? When pressed, her first, seemingly flippant response is “the North Koreans,” a reply that is unsettling not just for being still timely 35 years after the play premiered, but also for highlighting how the threat of nuclear war could prompt Jessie, like the nation she calls home, to adopt a preemptive strike policy, heedless that it would eventually be just as destructive for all concerned.

Of course, Jessie also has enemies closer to home – including, we soon discern, in her own home. Though Thelma’s love for her daughter and vice versa is never in doubt, they both come to recognize that living together was “a mistake,” despite the fact that doing so has prolonged Jessie’s life – or possibly because of it.

The busy work Thelma assigns Jessie to distract her from her depression has begun to resemble servitude, and the mother’s well-intentioned meddling in her child’s life has merely exacerbated her problems. Moreover, Thelma’s desperate attempts to dissuade Jessie from going through with her stated aim inevitably backfire. At best, they sound as unconvincing as platitudes at a funeral; at worst, they highlight the very reasons why Jessie would want to be free of her mother’s browbeating, not to mention the dead-end life she represents.

Indeed, one could say that Thelma is just as much of a failure in life as Jessie: both had profoundly unsatisfying marriages, debilitating health issues, deeply disappointing offspring, and are now condemned to a housebound existence that resembles being confined in a coffin, albeit a cheerily decorated one.

The difference is that Thelma is more willing to settle, finding genuine pleasure in such modest delights as the candy that overflows her kitchen cupboards, even though it is known to be bad for her – or perhaps partly because it is. A nihilist might view Thelma’s sweet tooth as a slower form of suicide, but at least the sugar-coating diverts her for the moment – or at least it does until Jessie’s announcement causes it to curdle on the tongue.

Could it be that self-deception, if not willful ignorance, are the only ways to endure life, and that examining our pretenses too closely, ostensibly in the interest of honesty, only serves to plunge us into soul-killing despair? TJ Lukacsina’s artfully tacky set hints as much by adorning the kitchen with apple décor, so that even the clock ticking down the fateful minutes to Jessie’s promised demise takes the form of the forbidden fruit that brought the fatal knowledge of good and evil into the Garden of Eden.

On the other hand, the play suggests that committing an act that many regard as cowardly may in truth be an indication of greater courage than the Thelmas of the world could ever manage, even if they wanted to do so. “We’ve all thought about shooting somebody; we just don’t do it,” she asserts with apparent reasonableness – until we realize that she has never really taken any step that might be considered unconventional, risky, or even authentically passionate.

Worse, Thelma feels a sense of entitlement in a world where nothing is promised, not even the fruit of her womb. Confronted with losing Jessie for good, she can only keen, “I thought you were mine!” – a confession that she understands too late not only that she has overstepped her maternal rights, thereby depriving this woman of an identity of her own, but also how irrelevant she ultimately is in both that woman’s existence and the grander scheme of life.

When all is said and done, the choice is each person’s alone whether to be or not to be, and with such autonomy comes fundamental responsibility for one’s own life. Despite her many legitimate grievances against the world, Jessie, in the end, takes the blame entirely upon herself: “I’m what was worth waiting for,” she concedes, as if she were her own Godot, “and I didn’t make it.”

Fortunately, under direction by Anne Hammontree that is motherly in the best sense, Strand’s production undeniably does make it. One could quibble about the casting, necessitated though it was by a last-minute emergency: Falcone is clearly not old enough to be Bush’s natural mother, and little attempt has been made by either makeup or characterization to conceal that fact. But the bond between these women never feels less than compellingly familial, and the rapport between these actresses is love incarnate, imperfect as it may be.

Falcone rages against the dying of the light with every weapon in Thelma’s pitifully limited arsenal, including the vital humor that would be all too easy to overlook in this situation. And Bush responds with disarming affection and Zen-like calm, but also an iron will, as if Jessie were a samurai pledged to carry out seppuku, regardless of all enticements to the contrary.

There can be no winner in such a struggle, and Lukacsina’s final light cue clues us that even survival may be nothing more than a life sentence with no possibility of the parole a blackout would provide. While we’re here, however, we may as well be enlightened, and even at its darkest, the Strand’s staging is unfailingly illuminating.