Making its Off-Broadway premiere with The York Theatre Company, Midnight at The Never Get, with book, music, and lyrics by Mark Sonnenblick (winner of the 2018 Jonathan Larson Award), has already enjoyed successful developmental runs at Don’t Tell Mama and the New York Musical Festival, with extended and sold-out engagements. More than just a romantic musical, it considers the impact of social politics and homophobia, economics and ambition, on the personal relationship of two twenty-something men in New York in the 1960s, prior to the Stonewall riots, when discrimination, anti-gay laws, and police raids on illegal gay bars were rampant.

Presented in the format of a cabaret act, the musical is framed in the context of a memory play, with the narrative tracing the course of the central love story between nightclub singer Trevor Copeland and songwriter/pianist Arthur Brightman, while recounting important events in gay history of the era, and incorporating a surprising surreal twist at the end, following a sprinkling of clues throughout the recollections and reenactments. Direct-address reminiscences by Trevor relay the men’s flirtatious first meeting, growing musical collaboration (their titular late-night cabaret act in the glittery back room of an illicit gay bar in Greenwich Village), and divergent views on how best to promote gay rights and to advance their own careers.

Directed by Max Friedman, the sentimental show is brimming with love and heartbreak, a mood of nostalgia, and a sense of palpable torment, expressed in Trevor’s conversations and interactions with Arthur, and in the increasing pain and uncertainty of his memories. Sam Bolen (who co-conceived the show) stars as the effulgent singer, and Jeremy Cohen as his purposeful partner, determined to make it on his own terms, in his own style (retaining the male pronouns in his love songs to Trevor and maintaining an ever-cultivated demeanor). Together they deliver the distinctly different personalities of the pair, contrasting the flamboyant vibrancy of Trevor with Arthur’s controlled sophistication and tenacious drive, which ultimately serve to undermine any chemistry between the two and result in sometimes stilted and less-than-forthright exchanges.

Original vintage-style numbers inspired by American standards of the 1940s and ‘50s (with harmonious music direction and arrangements by Adam Podd) underscore the emotional tone that alternates from torch songs (“The Mercy of Love”) to joyous tunes (“I Prefer Sunshine”) and wistful ballads (“When It’s Spring Again”), and, at times, camp ditties (“Toaster in the Sky” and, one of the highlights of the show, “My Boy in Blue” – a snappy send-up of The Never Get club being raided and the performers being arrested by uniformed policemen). The vocal solos (Bolen excels at hitting the big notes, while the quieter passages aren’t consistently smooth) and melodious duets (“The Bells Keep Ringing” and “Why’d’ya Hafta Call It Love?”) are supported by a fine five-piece band (Josh Bailey on drums, Nick Grinder on trombone, Brian Krock on alto sax, clarinet, and flute, David Neves on trumpet, and Robert Pawlings on bass), by Cohen’s terrific tickling of the ivories, and by Andrew Palermo’s choreography, ranging from the couple’s romantic slow-dancing to Trevor’s over-the-top razzle-dazzle (augmented by Bolen’s demonstrative facial expressions and hand gestures, active movements around the stage and on top of the piano, and direct eye contact with the audience).

The scenic design by Christopher Swader and Justin Swader recreates the look and ambiance of an elegant old-time nightclub, with marquee lights illuminating the interior, a row of Edison bulbs downstage, potted plants and wooden stools at both sides, and the grand piano played by Arthur at the left. The emotive mood of the show is reinforced by hazy fog effects, evocative lighting by Jamie Roderick, and suave costumes by Vanessa Leuck (with Arthur and the musicians in formal black tie, and the more effervescent Trevor in a sparkling burgundy tuxedo jacket and two-tone wing-tip shoes).

Midnight at The Never Get offers an intimate view of finding love and identity in a time filled with hateful bias and closeted secrecy, on the cusp of the gay liberation movement and the fight for LGBTQ rights. It’s a momentous theme that’s as vitally important to our history, and to the evolution of musical theater, as the beloved Great American Songbook that engendered its expressive score. 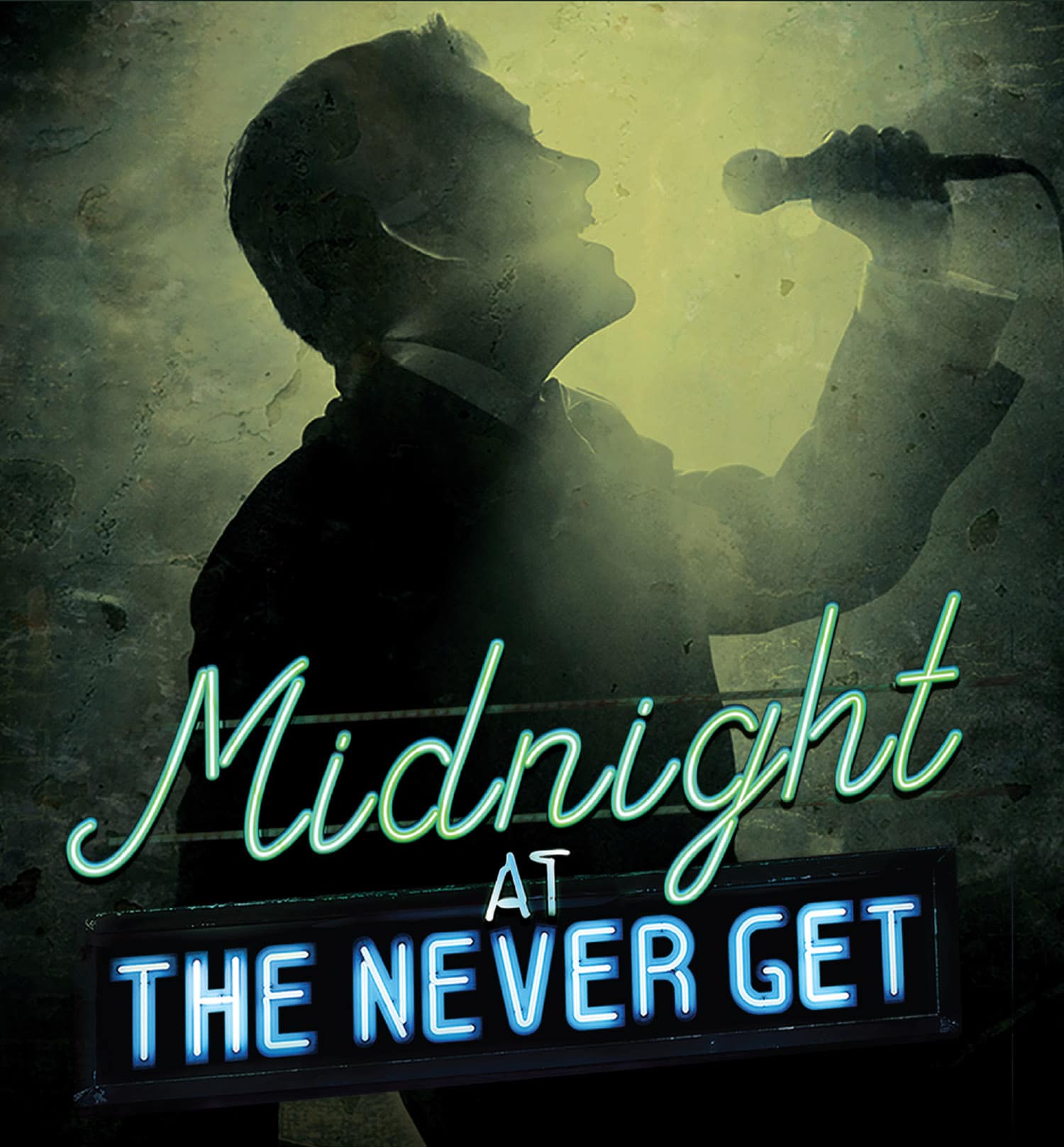