Award-winning writer, speaker, social activist, and feminist Gloria Steinem is the subject of Emily Mann’s new play Gloria: A Life, making its debut at the Daryl Roth Theatre. Directed by Diane Paulus, the production traces the course of Steinem’s life, times, and influence, and invokes the communal voice of the audience, in a manner that is more akin to the format of an academic lecture, political rally, and talkback than a traditional drama, to examine “history, her story, and our story.”

Act I presents pieces of Steinem’s personal biography, most of which are gleaned from the 2011 HBO documentary Gloria: In Her Own Words. They are interwoven with reenactments and archival videos of the socio-political issues, progressive movements, momentous events, and celebrated quotes that characterized her era (among them, the timely observation, “If men could get pregnant, abortion would be a sacrament”), and the leaders and members of an increasingly empowered community that inspired her advocacy on behalf of women’s rights and other important causes from the mid-20th century to the present (occasionally underscoring the ongoing relevance of her vision with references to our current climate). Immediately following the presentation, Act II opens up the conversation to the audience in the form of a traditional Native American talking circle, in which those in attendance are invited to express their opinions of the show and its contents, and to share their own relevant experiences with the group. On the date I attended, the audience was treated to a surprise appearance by Steinem herself (now a very vibrant 84), to lead the discussion and to receive the heartfelt accolades and gratitude of her admirers, and to remind us, in light of the upcoming midterm elections, that “the voting booth is the only place where everyone is equal.”

Played with personable commitment and understated emotion by Oscar, Emmy, and Golden Globe winner Christine Lahti, the overall mood of the eponymous figure, and the tone of the production in general, is retrospective and deferential, as she addresses the audience directly, discussing and recreating scenes that recall the challenges and triumphs of Steinem’s past and the motivation she received from the courageous women she saw and heard championing change. From her relationships with her estranged father and emotionally-troubled mother, to her student days at Smith College in the 1950s (when most women were enrolled to find husbands) and her hesitancy in the early years of her career to speak up against the sexism and inequality of a male-dominated industry (including her infamous undercover assignment as a Playboy Bunny), to her co-founding of New York Magazine (1968) and Ms. Magazine (1971), and her ultimate recognition, by the age of 35, of her complicity in the patriarchy and the need to act, Lahti imbues her portrayal with the positivity of Steinem’s own self-characterization as a “hopeaholic,” in lieu of an arc of dramatic intensity or an explosive moment of full-blown catharsis.

A diverse ensemble of six women (Joanna Glushak, Fedna Jacquet, Francesca Fernandez McKenzie, Patrena Murray, DeLanna Studi, and Liz Wisan) provides strong support for Lahti, in multiple roles as Steinem’s key contemporaries, paragons, and antagonists, and as the voices of every woman who has faced harassment, misogyny, and discrimination. Especially passionate portrayals are turned in by Murray, and Glushak is another standout as the outspoken US Representative Bella Abzug and as Steinem’s impaired mother. Paulus moves the whole cast around the space and into the aisles, with blocking that encompasses the audience and makes us feel like we’re a part of the group consciousness, testimonials, and demonstrations, not just impassive viewers.

If you’re a longtime fan of the feminist icon, Gloria: A Life will come as a welcome tribute to her contributions and legacy, though one offering few insights or information that you don’t already know or remember, and in a style that is more documentary and participatory than theatrical. 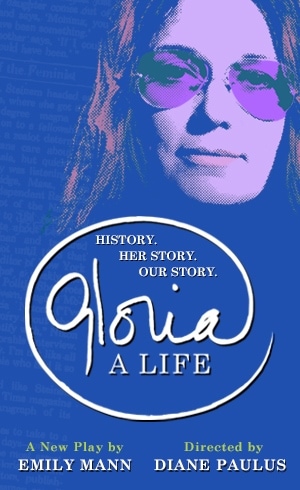