Looking to have a spoooooooky good time this Halloween season? From dance parties to plays, Broadway-bound productions to hometown favorites, here are our best bets for DC theatre guaranteed to send a shiver down your spine. We’ve done the research for you, now go have some fun!

Shows (in order of opening date):

Coraline
A Landless Theater Production performing at Best Medicine Rep in Gaithersburg, MD
October 6-28
The classic Neil Gaiman children’s book comes to life in this special production presented by Landless Theatre Company.  When Coraline explores her new home, she steps through a door and into another house just like her own . . . except that it’s different. It’s a marvelous adventure until Coraline discovers that there’s also another mother and another father in the house. They want Coraline to stay with them and be their little girl:  forever! Coraline must use all of her wits and every ounce of courage in order to save herself and return home.

Sleepy Hollow
Synetic Theater, Washington DC
October 3 – November 4
This new adaptation of Sleepy Hollow pulls together all the elements that made Synetic famous: gothic horror, iconic characters and imagery, and an emphasis on the surreal. The production explores and deconstructs the ideas of legend and myth, illuminating the story of a terrifying and well-known villain in a way that only Synetic’s physical lexicon can.
This production is recommended for ages 13+. 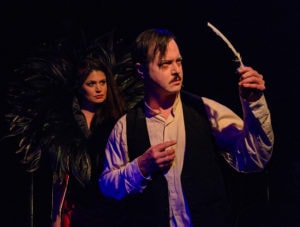 Nevermore
Creative Cauldron, Falls Church, VA
October 4-28
Take a dark and mysterious journey into the life of Edgar Allan Poe. This fresh and imaginative musical uses Poe’s poetry and short stories as its base and his shifting obsession with the women in his life as its catalyst. With hauntingly beautiful melodies, Nevermore breathes new life into Poe’s work and explores a twisted true-life tale that is as bizarre as his classic stories of the macabre.

Dracula
The Little Theatre of Alexandria
October 13 – November 3
Bram Stoker’s classic tale of gothic horror comes to life – and death – on stage. Join the colorfully macabre cast of characters as they take you on a breathless and bloody thrill ride from the depths of Transylvania to the heart of Victorian London. Rich with both humor and horror, this play paints a wickedly theatrical picture of the world’s most famous vampire. Dracula contains sexuality and violence. It is not recommended for children under 15.

Frankenstein in rep with A Midnight Dreary
We Happy Few Productions performing at Capitol Hill Arts Workshop in DC
October 18 – November 10
Frankenstein: In a room of filthy creation, a young man stands alone at the turning point of human history: a remedy to the steady cold hand of Death. On the table lies his greatest promise, the product of all his hard work, the summation of his hopes and dreams. As Victor Frankenstein brings his impossible creation to life, he also opens a door to death, destruction, and regret.
​
In the newest installment of We Happy Few’s Classics-in-Action series, we’ll explore Mary Shelley’s Frankenstein in an hour-long performance using her original text, live action, puppets, and a custom cocktail to bring to life the Frankenstein that you’ve always wanted to know.

A Midnight Dreary: Follow us down the rabbit hole of Poe’s mind as we wind our way through his stories, his madness, and his haunts – all with a drink in hand. This production is a site-specific piece, originally designed for Spectre Arts and uniquely tailored for each space it’s performed in. We invite you to join Poe (all three of him!) for a first-hand look into the mind of the tortured genius. Using only Poe’s words, We have whipped up a tale complete with music, poetry, and terrifying tales of death and destruction.
​ 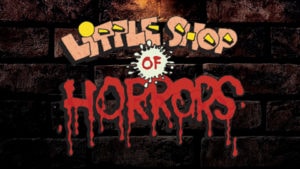 Little Shop of Horrors
The Kennedy Center, DC
October 24-28
Good luck getting tickets to this star-studded rendition of the theater classic about a man who just wants a woman to love him and the plant that destroys them all.

Just want to party this Halloween season? Two local theaters are ready for you:

Vampire’s Ball
Synetic Theater – Friday, October 26
You are invited to the Best Halloween Party in DC: Synetic Theater’s 12th Annual Vampire’s Ball. Party with the Cast and Crew of Sleepy Hollow after the October 26 Performance with an Open Bar and DJ Dance Party! Tickets include 8 pm performance of Sleepy Hollow, post-show party with dancing, open bar, costume contest, and more!

For ticket deals on these and other spooky events, visit DCMTA’ ticketing partner, TodayTix.