The witty title gives a good indication of what to expect in the Off-Broadway engagement of The Book of Merman, now performing at St. Luke’s Theatre. A laugh-out-loud mash-up of Broadway’s smash hit The Book of Mormon with the larger-than-life persona of the legendary mid-century belter Ethel Merman, the musical parody by Leo Schwartz (book, music, and lyrics) and DC Cathro (book) takes a hilarious look at a seemingly fated encounter between the vibrato-voiced star of stage and screen and two young proselytizing Mormon missionaries who arrive at her door. So what if she died in 1984? Mistaking Elders Shumway and Braithwaite for door-to-door magazine salesmen, Ethel welcomes them in after their frustrating day of canvassing the neighborhood for prospective converts, and they all learn an invaluable lesson about being true to oneself, as both the Mormons and Merman come to embrace who they really are.

Directed and choreographed by Joe Langworth, the lively fast-paced show is filled with spot-on spoofs of its famous sources, silly send-ups of their familiar songs, clever pop-culture references, and campy humor, delivered by the terrific trio of Carly Sakolove as the iconic Merman, Chad Burris as Shumway, a flamboyant theater-bug and lifelong fan who begins to question his religious commitment, and Kyle Ashe Wilkinson as Braithwaite, a serious and devoted Mormon who harbors a few secrets of his own. All three bring high-spirited energy, powerhouse vocals, and sidesplitting characterizations to their distinctive roles, while bantering, bickering, competing, and ultimately coming together to accept themselves and to appreciate each other.

The inspired opening numbers set the stage for the lighthearted lampoon, with the Elders singing “Hello” to the door-slamming, disinterested, and naked residents to whom they’ve been enlisted by their Church to offer salvation, and vocalizing about their divergent opinions on its headquarters in “Salt Lake City” (Braithwaite loves it; Shumway hates it). Once they’re invited into Ethel’s home, they join in on revised renditions of such Merman classics as “Some People” and “Anything You Can Do” (here with updated lyrics, under the titles “Most People” and “Better Than You”), curse in G-rated Mormon style (“Son of a Motherless Goat”), offer up salacious double-entendres (“If It’s Not Hard, I Don’t Like It”), and, in one of the most uproarious highlights of the show, perform a rap version of Gilbert and Sullivan’s “I Am the Very Model of a Modern Major-General” (after encouraging the singer to make up for her disastrous 1979 disco album), all with hysterical take-offs on the accompanying dance moves and backed by a live and vibrant three-piece band (Music Director Aaron Benham on piano, Kris Rogers on bass, and Brandon Ilaw on percussion).

Costumes by Pablo Borges tellingly contrast the staid white shirt, black pants, and ties of the Mormons with the glittery sequined dress, rhinestones, and dark glasses of Merman, and Josh Iacovelli provides theatrical lighting for the song-and-dance numbers and an old-style artificial Christmas tree in her living room (which the real Ethel Merman did, in fact, keep up year-round, because of her love of the holiday and its message of good will).

The Book of Merman is outrageously funny and impressively well sung, performed, and designed. For theater buffs who know the works that inspired it, it’s a must see. For those who don’t, this is one parody that could make you a convert to the entertaining realm of musical theater! 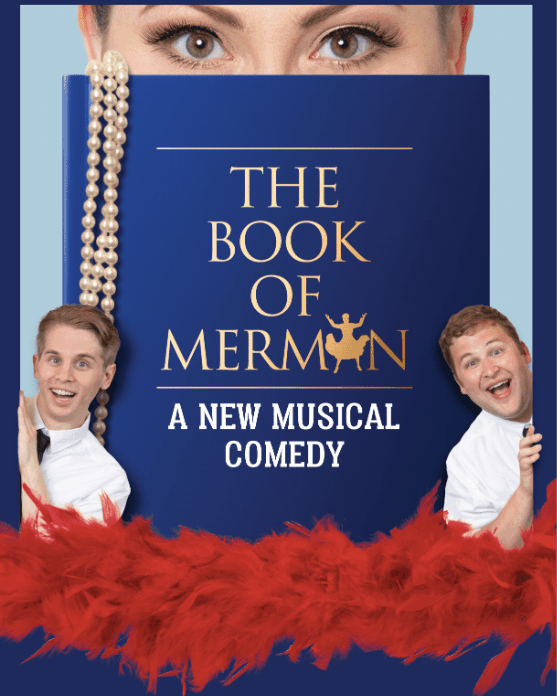