If you haven’t already heard, Baltimore Center Stage is producing Playwright Lauren Yee’s King of the Yees. And in case you weren’t aware, this play is kind of a big deal. The story, which takes place in San Francisco’s famous Chinatown, is a semi-autobiographical play centered on the playwright’s real-life relationship with her father and her internal struggle as she tries to connect to her Chinese and American heritages. It’s funny, charming, sincere and it’s being produced at an opportune moment – one in which the stories of Asian Americans have found their way front and center of a conversation that tends to focus on the White vs. Black experiences in cities like Baltimore. 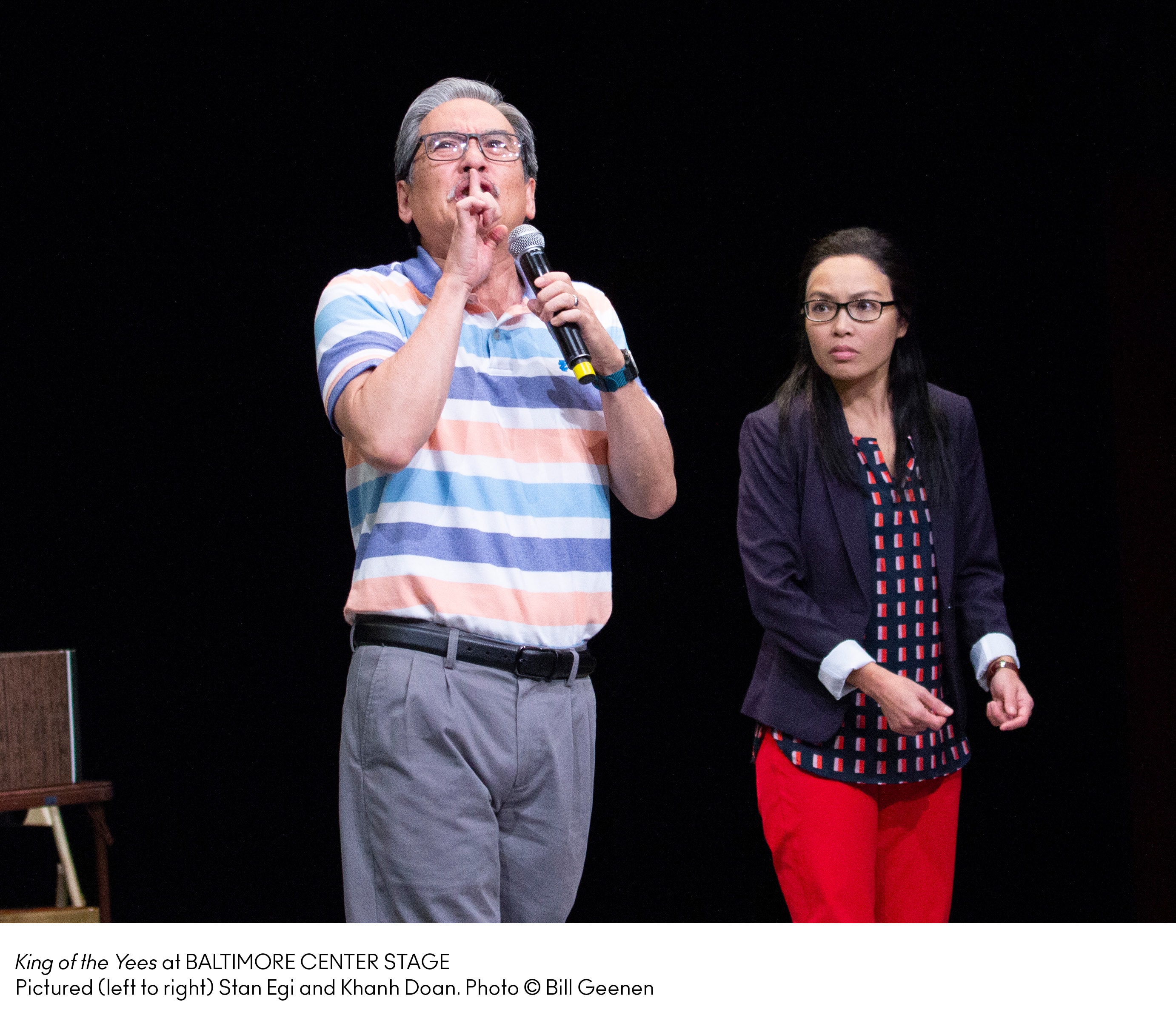 There’s been a lot of excitement leading up to King of the Yees. Many local Asian American Pacific Indegenous artists hope for more plays like it, ones that present honest portrayals of Asian American communities and identity. And with the huge success of the first-ever Charm City Night Market last month, an event celebrating the area’s Asian American community, the conversation regarding Baltimore’s own historic Chinatown and the effort to revitalize the community surrounding it has been more centered than ever.

Amidst all of the local hype, Desdemona Chiang has stepped into the role of director with a cool confidence showing Baltimore and Center Stage that she is exactly the person to help present this mostly unfamiliar story to Baltimore.

This isn’t Chiang’s first time directing plays that present unique perspectives on American identity. Born to Chinese immigrant parents and raised in Los Angeles, Desdemona has been known for directing work representing the stories of marginalized communities. In 2010, she co-founded the theater company Azeotrope in Seattle with fellow Asian American theater artist Richard Nguyen Sloniker. Their mission is to “create a space where audiences confront the marginalized and obscured, bringing visibility to the invisible.”

In our conversation, Desdemona talked about her experiences as one of the few nationally recognized Asian American female directors in American theater, her difficulty finding work earlier in her career as an Asian American actor and what she hopes will come of Baltimore’s conversations regarding representation following King of the Yees.

So you intended to be a doctor and then you found theater… how did that happen?

I went to undergrad at U.C. Berkley and studied biology. My first semester, the guidance counselor said: “You really should take an arts elective.” I heard of this class called ‘Intro to Acting’ in the drama department that had no lectures, no papers. I thought, “Great! Easy ‘A’!” So I took that class. And that one class became another class became a Shakespeare class became a directing class. The next thing I knew, I had enough credits to take a second major. I have a double major in biology and theater. Because I couldn’t just do theater for real. That would be financial suicide. I didn’t really think I would do theater as a career. I thought, “Just have fun and then be done with it.”

When you finally decided you were going to do theater, was that hard for you to tell your parents?

Yeah. After undergrad, I put the theater away for a couple of years and did a lot of work in the tech sector. But I had [an identity] crisis. I thought, “Is this really what I wanna do?” So I got involved with a theater company while I was day jobbing, did the 6-10 rehearsal at night.

It came to a point when I decided, “I want to do this for real. I want to make this my job.” I told my mom. “Mom… I think wanna do more theater.” And it was just quiet on the phone. Then, she said, “But you went to Berkley…and you’re going to do drama? How are you going to eat?” I told her I was thinking of graduate school and that’s when she said, “Oh, oh… okay! You’re applying to graduate school? That’s respectable.” I thought, “Great, now I have to get into graduate school!” I got into the University of Washington State in Seattle. I think once my mom heard that her mind went, “Oh she can teach. She can be a professor somewhere and that’s a respectable path.” I am an adjunct at Cornish College in Seattle so I do teach, but the bulk of my work is actually freelance directing.

There isn’t a lot of theater that tells or represents the Asian American story very well. Do you think that Asian parents don’t always encourage us to be artists because when they come to the States they realize that our stories aren’t being told and they don’t want us to struggle?

Well, I grew up in Southern California and in the ‘80s there was this mass influx of Chinese [immigrants]. Most of my friends growing up were Asian or Latinx or Black because I lived in a heavily minority-majority community. A lot of us were immigrants. I grew up feeling quite centered in my otherness and I just thought the rest of the world was like L.A. I didn’t understand that I was an “other” until I left the L.A. area. It’s probably why I became a director.

I remember auditioning for stuff and just never getting cast in anything. For a long time, I thought, “It’s probably ‘cause I’m not good.” To be fair, I don’t think my acting is very good. But my inability to get involved as an actor made me go, “You know what? If I can’t be there on stage, I’ll be here behind the table.” That’s how I started directing, ‘cause no one would cast me in anything. 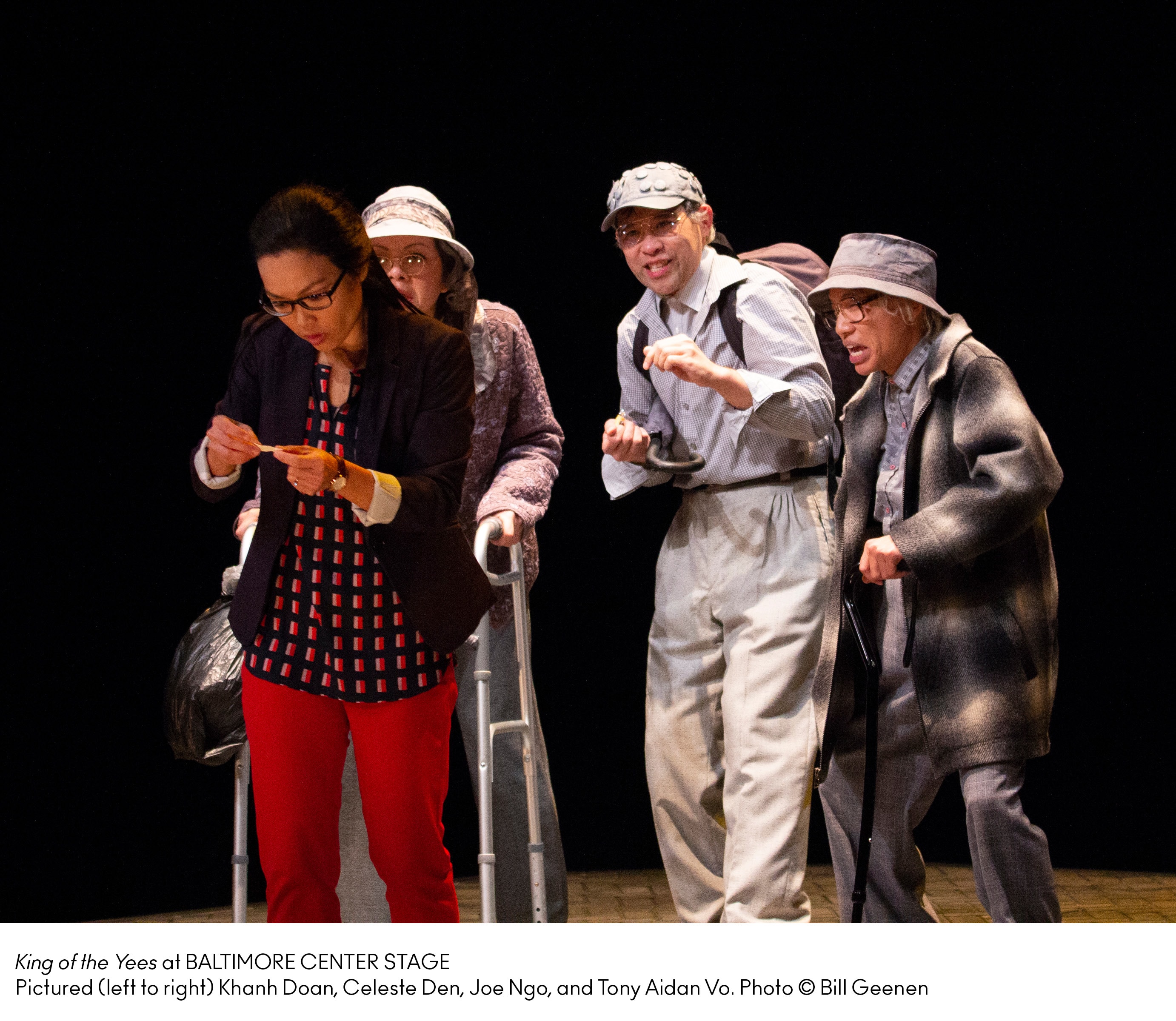 You’ve directed a lot of Asian American centered plays. Is that your personal mission as an artist, as a way to represent?

Yes and yes. A lot of times I don’t get to pick the play I direct. I get called in to direct something for a theater. And I’m conveniently Asian and working on a national level. So I think in some ways, when a theater wants to do something like King of the Yees and they need a director who has a certain amount of experience, I am one of a handful of Asian [theater] directors in the country who can fulfill that rubric. Which is problematic.

I’ve been told, “Oh you know that when they hire you, they’re hiring you because of this…” I just can’t get my head too caught up in that, I would go mad if I tried to guess the reasons why I was valuable to an institution. I just have to say “for whatever reason, this theater is hiring me.” And maybe I check a lot of boxes and I understand that about my commodity in this field. But for me, it doesn’t matter how I got in the room. The point is I’m in the room and I’m gonna kick ass. I’m gonna do a good job so I can come back on merit.

You’re part of a small group of Asian American female directors in theater. How do you think that impacts the work that you do?

There’s actually a large number of Asian female directors, just not at the regional theater level. A lot of people are working in their communities, but [ones who are doing] national, inter-regional work – that’s very rare. I think two things. One, there’s more at risk when I fail. So I try to not do that. And then two, what can I do to get more folx in the pool? If I can’t do a job myself, who do I advocate for?

This isn’t your first time directing King of the Yees. Is your goal to reach out to the Asian American audience or are you trying to tell a story that everyone can relate to?

I have to tell the best story I can that’s in this play. I can’t account for the individual experiences of everybody in the audience. I’ve also found that the more specific you get, the more universal it becomes. There’s this constant argument that August Wilson is a universal playwright. No, August Wilson was a great writer for Black America and because he writes the Black experience so well, we read into it and we make it universal [for ourselves]. But let’s be clear, he wrote very particularly about the Black American experience and he wrote it brilliantly. And because he was so specific we [find ways to] connect. If I can honor Chinatown and the Chinese American experience in this play, hopefully, it will be universal.

What do you hope the community in Baltimore will connect to in this play or leave thinking about?

There’s something very fulfilling about seeing yourself reflected in the community you exist in. But plays don’t exist in a vacuum. Plays exist in dialogue with a community. So the real question is “What will Center Stage do to continue that relationship so that this doesn’t feel like tokenism?” You do it once, it feels like a token. So if you bring in this audience, is it just for this one show? If so, it feels like an empty gesture. What are the future gestures [Centerstage will] make to the community to keep this dialogue going? Hopefully, this won’t be the last time I see you at Centerstage. Once King of the Yees is in the community, what are the conversations that come out of it and how is this play going to impact Baltimore? That’s what I’m interested in. 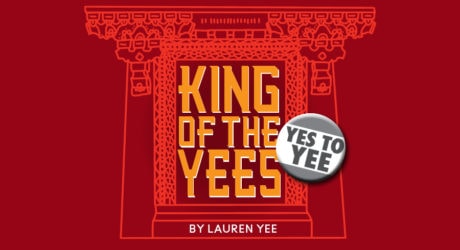 King of the Yees plays October 25 to November 18 at Baltimore Center Stage – 700 North Calvert Street, in Baltimore, MD. For tickets, call the box office at or go online.