Honoring its mission of developing and presenting new works of musical theater, the New York-based organization Premieres, led by Artistic Director Paulette Haupt, is back with its biennial series of Inner Voices for a limited run at TBG Mainstage Theatre. The new 2018 season comprises a trilogy of intimate one-act solo musical portrayals that share a consistent style of mostly sung-through extended monologues set to a score, as well as a common theme of lonely and vulnerable individuals (but of a different generation in each) at home (with simple everyday sets and props by Reid Thompson, costumes by Brooke Cohen Brown, and lighting by Aaron Spivey), relaying their first-person stories in direct address to the audience.

In Window Treatment, with words by Deborah Zoe Laufer and music by Daniel Green, Farah Alvin brings her powerhouse vocals and quirky comic delivery to her role as a nerdy woman obsessed with watching a neighbor she’s never met across the courtyard of their building through the windows of their apartments. With binoculars. As she recounts the precise times of his daily movements, worries about where he is and who he’s with, fears that he’s dead, notes everything that they have in common, and imagines having an actual relationship with him, she runs the gamut of eccentric actions and hilarious emotions, from concerned and agitated, frantic and hysterical, to angry and distracted. Directed with high energy and sardonic wit by Portia Krieger, Alvin’s animated performance satirically delves into her character’s psyche (observing “that would be . . . crazy,” “I have to get a hold of myself,” it’s “all in my head,” and questioning “what is real?”) and offers some irreverent revelations about her profession and background. Alvin’s strong and intense voice is augmented by expressive musical accompaniment, with Brandon Wong on vibraphone, and music direction by Paul Masse. Spoiler alert: No one gets hurt, and stalking has never been so funny!

Featuring the precocious talent and irresistible charm of young actor Finn Douglas in his Off-Broadway debut, The Costume, by Daniel Zaitchik (words and music), is set in the bedroom of eleven-year-old Leo on Halloween, 1954. His mid-century journey from loneliness and uncertainty to kindness and healing, and his recognition of what constitutes “good quiet” versus “bad quiet,” are triggered by a wounded pigeon, entrusted to him to care for overnight by a concerned neighbor. The sentimental story, which employs the bird as a metaphor for the damage inflicted on the boy and his parents, is obvious in its symbolism, but moving in its message. Under Noah Himmelstein’s direction, and music direction by Deborah Abramson, Douglas delivers a beautiful and engaging portrayal that hits all the right notes, evokes a bittersweet tone, and soars with childlike sensitivity, discovery, and ultimate optimism.

Closing this year’s trilogy is Scaffolding, written and composed by Jeff Blumenkrantz, directed by Victoria Clark, and starring the masterful Rebecca Luker, with music direction by Benji Goldsmith. In her role as a teacher and single mother raising an only son with special challenges, her deeply-felt emotions are palpable, as she expresses her pride and accomplishments (in giving him the right structure – the eponymous scaffolding – that would help support and connect him), admits her mistakes and regrets, comes to terms with her flawed logic and bad decisions, but still retains a glimmer of hope for contact, forgiveness, and reconciliation. While showing us her character’s overprotective and overbearing nature, she also uncovers her complex motivations and intentions, in a moving performance that is consummately human.

Although initially advertised as three half-hour works for a total running time of 90 minutes, the pieces are longer, and the added length contributes nothing to enhance the clarity of the narratives or the quality of the two-hour-and 20-minute program with two intermissions. To the contrary, the writing could use some edits for a quicker pace, lessened redundancy, and a greater impact, and the set changes could have been done efficiently with brief pauses. And while Inner Voices does not contain stand-alone songs or catchy tunes that you’ll be humming on the way out, the music complements the moods of the characters and punctuates the trajectories of their stories, and all three skilled actors offer committed performances with heartfelt vocals and spot-on characterizations. 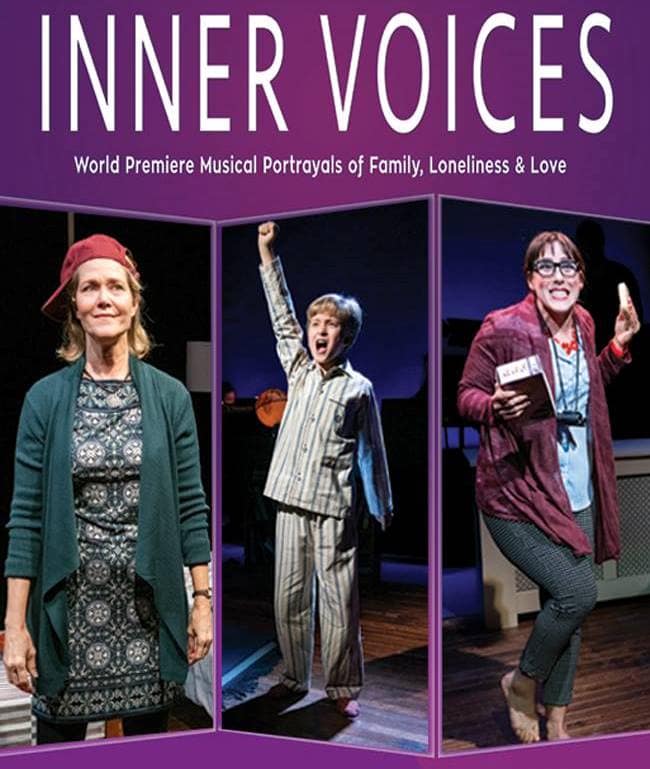