I’m a big fan of composer Shaina Taub. Her unique blending of socially conscious theater and pop-folk tunes has brought her great acclaim in recent years. After adapting and musicalizing two Shakespeare plays – As You Like It and Twelfth Night – for New York’s Public Theater, Taub was recently tapped to pen the lyrics for the upcoming Elton John composed musical The Devil Wears Prada.

When I learned that the Keegan Theatre was bringing the Public’s As You Like It to DC audiences, I set out to learn more about it. What can we expect from this 90-minute musical version of As You Like It? What does Shaina Taub bring to Shakespeare’s romp through the Forest of Ardenne? And why are we seeing so many new versions of Shakespeare plays with added music? (Case in point: Shakespeare Theatre Company’s The Comedy of Errors)

The following questions were jointly answered by As You Like It co-directors Cara Gabriel and Josh Sticklin.

What do you think of the recent trend of adding music to Shakespeare?

Adding music to classical texts increases accessibility to contemporary audiences. Though Shakespeare’s stories are timeless and certainly still relevant, his plays get a sour reputation for being long and difficult to understand. Music expresses the heightened emotional state Shakespeare gives us through poetry. You don’t have to be a Shakespearean scholar to understand this piece. Plus – this adaptation is only 90 minutes, making it perfect for younger audiences and Shakespeare newbies!

What does this production retain from the original and what does it bring that is new?

Shaina Taub and Laurie Woolery kept Shakespeare’s tangled web; the divided family tree; the magic of Arden; and the characters we know and love. They have added inclusivity. Much like Arden itself, this new production explores the spectrum of genders and sexual identities and features a multicultural cast. Not only do these changes feel crucial for a 2018 audience, they add never-before-seen layers and a contemporary complexity to our familiar characters and a sense of urgency that will ring true to our DC-based patrons.

How does this version of As You Like It intersect with contemporary social issues?

The more we dive into this show, the more it feels like we’re diving into Shakespeare’s original intention. Perhaps this production is what Shakespeare would have produced had he been alive today. The classical text itself is already feminist and queer-friendly, this production just leans in, normalizing homosexual relationships on stage as well as the spectrum between genders and sexualities. Arden is a utopia for the exiled. It offers relief from societal norms and pressures; acceptance for outcasts of any nature; and the freedom to live your truth. It’s impossible not to be drawn into the magic of Arden. Audiences will be transported to a safe place of solace and love. How can that not appeal to anyone forced to live through our current political state, with its uncertainty and lack of safety?

Describe Shaina Taub’s composition style. What does she bring to Shakespeare?

Shaina Taub’s composition lays somewhere between pop and folk in style. Her melodies are catchy, and her lyrics weave Shakespeare’s original text with contemporary language and familiar musical styles. The songs’ emulate the location in which they take place. The music of the court is structured and staccato, it moves quickly and urgently with little space for breath. The music of Arden is free-flowing and laid back. And ultimately the music leans into the story’s comedy, enhancing and making more accessible the characters, their foibles, and their love. 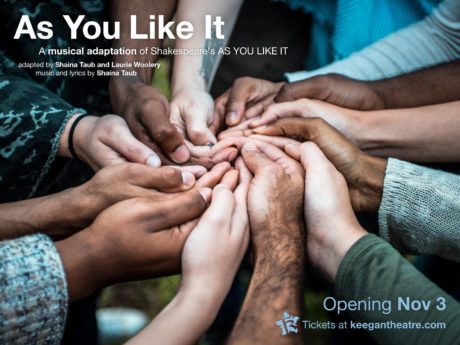 As You Like It plays November 3 through December 2, 2018, at the Keegan Theatre – 1742 Church Street, NW, in Washington DC. For tickets, call the box office at or go online.