You can’t miss Betelgeuse. A star in the constellation Orion, this supergiant is red as flame and one of the 10 brightest stars in the night sky.

At approximately 10 million years old, Betelgeuse (pronounced “Beetlejuice”) is not long for this universe. High mass stars like these consume their fuel quickly before exploding. As spectacular as it appears in the heavens now, Betelgeuse is bound to go supernova. 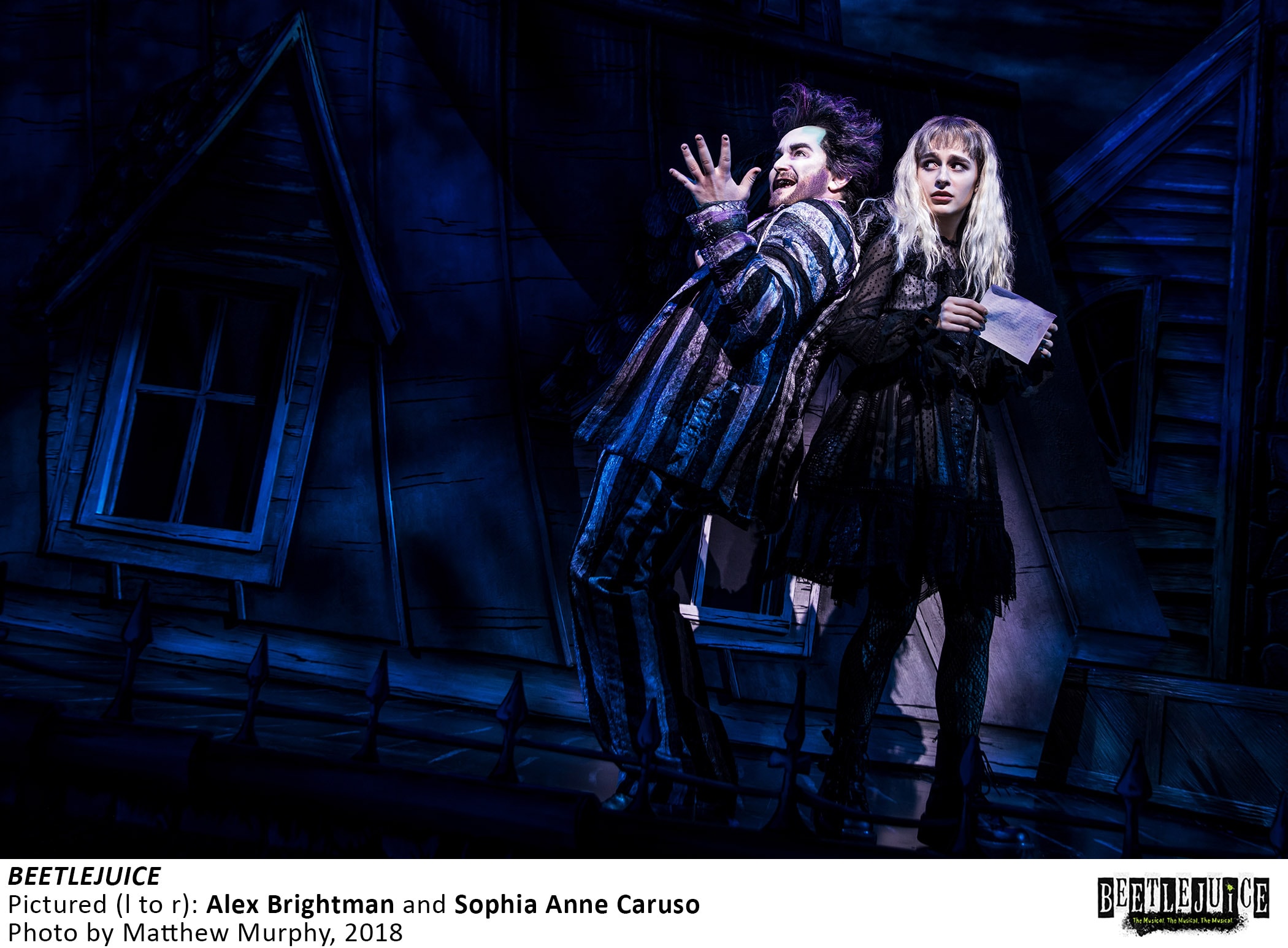 As I headed out of the National Theatre Sunday night, following the opening night of Beetlejuice the musical, I couldn’t help but think of the show’s celestial namesake.

A new stage adaptation of the 1988 fantasy/comedy classic which starred Michael Keaton in the titular role, Beetlejuice (directed by Alex Timbers with music and lyrics by Eddie Perfect and a book by Scott Brown and Anthony King), is bright, bold and impossible to miss.

But it’s so supercharged with manic energy and competing ideas that I can’t imagine how it will sustain itself when it heads to Broadway (Beetlejuice opens at the Winter Garden Theatre April 25).

Alex Brightman of School of Rock fame is here as the “ghost with the most” – the most lines, the most laughs, the most stage presence. Whereas Michael Keaton had only 17 minutes of screen time in the movie, Brightman’s bio-exorcist in a black and white striped suit haunts the National Theatre stage for most of the show. He never wears out his welcome.

Brightman never imitates Keaton’s performance. He and the creative team have created a totally sui generis specter in this Beetlejuice. The show’s narrator, he breaks the fourth wall to tease the audience, tell jokes and confide his puckish schemes.

His humor runs the gamut from the highbrow (“Death is sort of my oeuvre/I make crossing over so much smoother”) to the low brow (“I’ve been dead for millennia/Giving houses enemas”) to the downright unprintable. Imagine comedian Sam Kinison playing the Las Vegas Hilton in Hell.

But where the show’s producers miscalculate is in enlarging the role of Lydia Dietz to match him. In an interview with Nicole Hertvik for DCMTA, Beetlejuice composer Eddie Perfect revealed that “Sweeney Todd” sparked his interest in musical theater as a child. But Lydia is no Mrs. Lovett.

Sophia Anne Caruso is a skilled singer with an impressive range. But Lydia can’t be Beetlejuice’s foil or his lover – she’s far too young and naïve. When she and Beetlejuice play haunted house together, the effect isn’t just creepy. It’s felonious.

Which brings me to the other problem with Lydia. In attempting to buttress the film’s paper-thin plot, the creators of Beetlejuice have given Lydia a dramatic arc. She’s not just going through a goth phase here; she’s grieving the death of her mother whose funeral opens the show (“This is a show about death”). Perfect’s elegiac ballads for Lydia are so earnest that they seem better suited to “Dear Evan Hansen” than this farce.

Caruso owns her solos, but there are so many of them that they have the cumulative effect of stepping on the show’s momentum. Case in point: Right after a deceased boy band aptly titled “Boy Inferno” (they died in a fiery plane crash) serenade Lydia and her father Charles, earning some of the biggest laughs of the night, Lydia breaks up the party to give us another emo power ballad. You believe Caruso’s grief, but you wish she’d run off to boarding school with Hamlet and leave us to our fun.

Beetlejuice’s fatal flaw is that it can’t decide whether it’s a harmless Gen X nostalgia vehicle or an angsty Gen Z drama. It courts both audiences with the same manic zeal.

But Beetlejuice the movie didn’t succeed because of its rich characterization. It was a hit because of its original visuals, Danny Elfman’s darkly beautiful score and its dry humor. 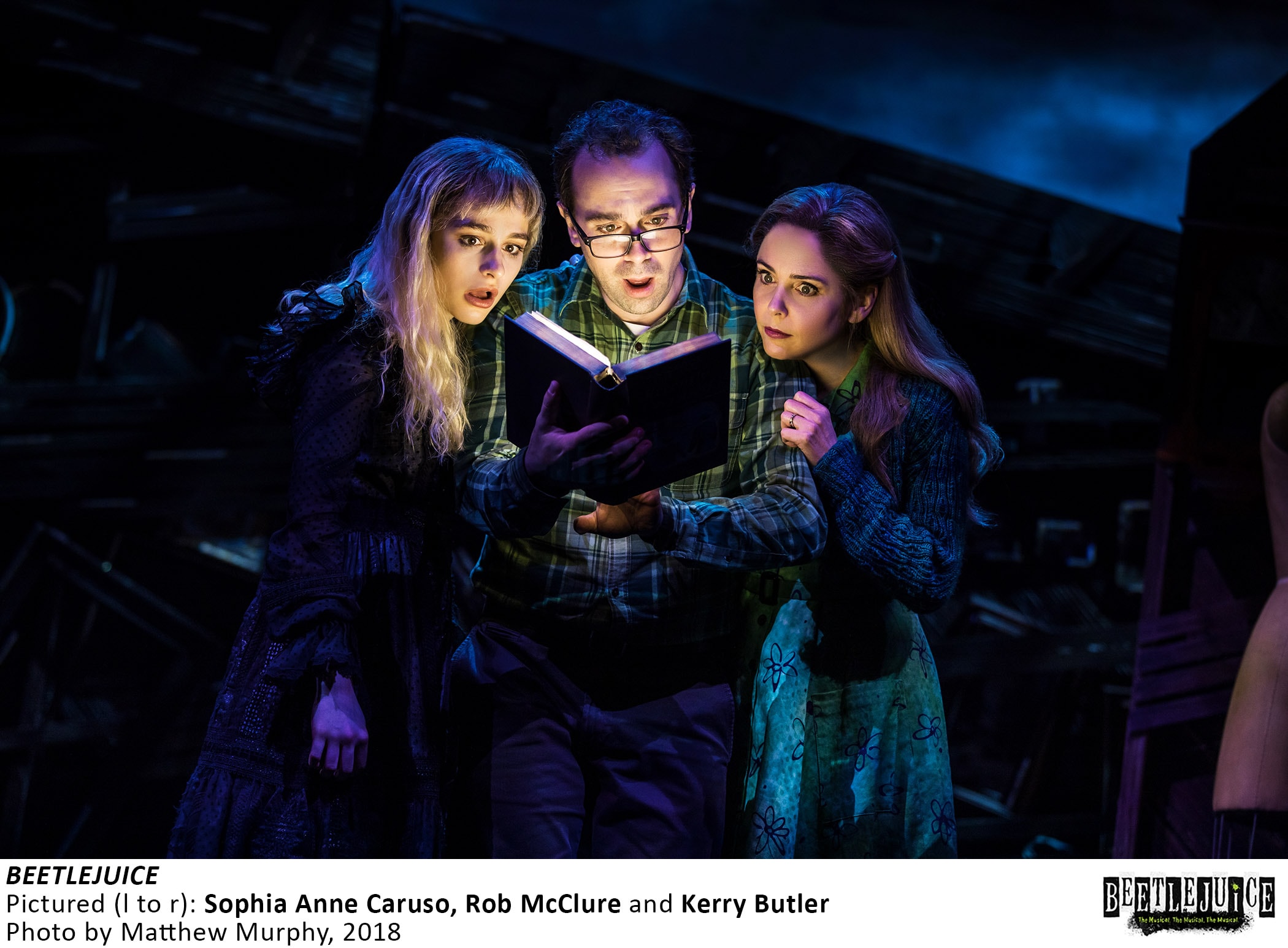 Many of these pleasures abound in the musical version, too, from David Korins’ Tim Burton-inspired set design to William Ivey Long’s costumes evoking Mexico’s Dia de Los Muertos to Kenneth Posner’s ethereal lighting. Connor Gallagher’s choreography steals the show in the famous “Day-O” dinner scene, a movable feast that will turn you off pork forever. And Scott Brown and Anthony King’s book contains numerous zingers, the best of which comes courtesy of Dana Steingold as a Girl Scout who’s faint of heart. “Being a Girl Scout is a breeze, even if you’re born with a congenital disease.”

Other departures from the movie feel like missteps. In the film, the parents, Charles and Delia, were snobs and social climbers. You took the ghosts’ side against them. Here, Adam Dannheisser and Leslie Kritzer are so funny in their respective roles – especially Kritzer as a New Age life coach — that I missed them after they’d been scared out of their house by its former inhabitants.

As to the Maitlands, after their delightful duet in Act I there is sadly little for Adam (Rob McClure) and Barbara (Kerry Butler) to do in this show, except watch events unfold helplessly from their attic.

It’s all downhill after the dinner scene. Even the fanservice in Act II feels forced, such as when the man with the shrunken head and the football team show up to wave at the audience.