The title of BlueShift Dance’s show, “The Male Gaze,” refers to the objectification of women by cis-hetero men. The idea of the “male gaze” isn’t new to women. The premise is “what happens when ‘the male gaze’ turns to the women whom men love deeply?” 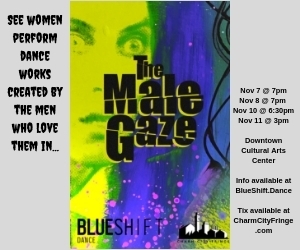 The film is about relationships, the choreography is about communication and the dance is about trust. The title “The Male Gaze,” a phenomenon largely considered to be a negative thing, is being used “ironically,” I suppose, like wearing a pair of Hammer pants “ironically,” which is seemingly done exclusively by people under the age of 40, confusing the likes of me with an alternative definition of “irony.”

The project is this: When a man, who is not a choreographer and who loves a woman who is a dancer, creates a choreographed piece for her to perform, what happens? It seems that the process is the point, and the product is the result. The three dance pieces are well done and interesting, performed with strength and grace by all three of the women dancers, but it is the process that leads to the dance which is the really intriguing bit.

Hence the misnomer issue. This gaze is decidedly NOT the toxic, objectifying “male gaze,” but rather one of reverence and acceptance. This is the gaze of one who sees passion, perfection, perspiration- and loves all of it.

Often, what is NOT shown is as important as what IS shown, thus having a significant chunk of this artistic piece left to the viewer’s imagination adds value and increases audience engagement. Whether that was done deliberately or was simply an interesting byproduct in the performing art piece is an entertaining question with which to grapple as one travels to the next Fringe offering.

“The Male Gaze” is presented on the second floor of a building downtown that seems to have been reclaimed. There are several shiny new lighting fixtures throughout the two upper levels of the building. DCAC (as hasty signs nickname the venue) has three performance areas, all of which will be in use during the course of the Charm City Fringe Festival. I did not have the opportunity to visit the lower level, but the main floor area (where there are restrooms) appears to be a ballroom, complete with a raised stage and crystal chandeliers. 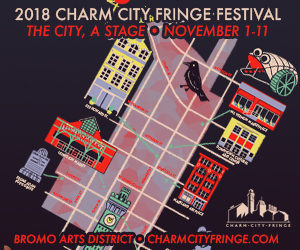