George Mason University Center for the Arts has three stirring works of theater November 15-18 on the Fairfax campus.

Friday features A Rap on Race, a modern spin on a monumental conversation about race from Spectrum Dance Theater and co-created by Tony-nominated choreographer Donald Byrd and playwright/actor and Pulitzer Finalist Anna Deveare Smith. The event will feature pre-performance activities beginning at 6:30 pm including Spoken Word, presented by The Mason Black Student Alliance and Student Involvement and a discussion by Mason Professor Wendi Manuel-Scott focusing on “Bodies in Protest.”

Sunday sees Science Fiction come to life onstage in Aquila Theatre’s Frankenstein Sunday. There will be a pre-performance discussion with Department of English Professor Kristin Samuelian, 45 minutes prior to the performance.

Throughout the weekend is a George Mason student production of Machinal, the parable of a troubled young woman, inspired by the real-life convicted murderer Ruth Snyder.

For more details, see below: 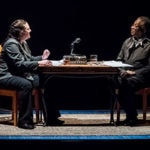 This innovative new work enlivens the current conversation around race and equity, mixing dance and theater to create a fully original, groundbreaking work. It is based on a momentous public conversation held in 1970 between anthropologist Margaret Mead and novelist James Baldwin. A Rap On Race uses a series of choreographed dance duets juxtaposed with verbal duets, which were gleaned from this conversation, as a means to reveal the complexities involved when talking about race.

A Rap on Race features the world-renowned dancers of Spectrum Dance Theater and narration by Julie Briskman as Mead and Donald Byrd as Baldwin. This production reinvigorates the historic conversation that took place nearly 50 years ago and yet is still relevant today. Conceived by Tony-nominated choreographer Donald Byrd and actress/playwright and Pulitzer Finalist Anna Deavere Smith, the work features an original score by jazz great Charles Mingus.
$48, $41, $29 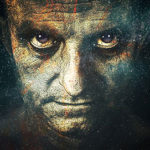 Aquila Theatre brings the classic thriller Frankenstein to the stage in a production that is sure to make your spine tingle. The story centers on Victor Frankenstein, a Swiss scientist obsessed with his mission to create an artificial humanoid. Without considering the implications, he succeeds, but his creation is no ordinary man. It is a huge, hideous creature possessing a sharp mind and with human emotional needs, which has horrific unintended consequences for the doctor and his family. Written nearly 200 years ago and considered the first true work of science fiction, Shelley’s novel was years ahead of its time, and it still poses myriad timely ethical questions, including those surrounding artificial intelligence. Known for their bold, daring physical style and described as “a classically trained, modernly hip troupe” (The New York Times), Aquila Theatre pays homage to the original, frightening writing of Mary Shelley.
$44, $37, $26 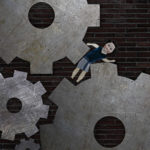 A parable about an ordinary young woman living and working in a mechanized, materialistic, wasteland of society, Machinal is inspired by the real-life case of convicted murderer Ruth Snyder. Considered one of the high points of Expressionist Theater on the American stage.
$20 Adult, $10 students, staff, seniors and groups

For more information, or to buy tickets to these and other George Mason University events, go online.