Tadeusz Slobodzianek’s Our Class opens in 1926 in a kindergarten classroom in a small town in northeastern Poland. Whereas most of Europe’s Jews had experienced a long history of expulsions and ghettoization, Poland had been, for nearly ten centuries, a relatively tolerant exception: Jews could own property and had long received legal protections.

Consequently, by the time of the Second Polish Republic, it boasted the largest Jewish population in all of Europe, with Jews making 10% of the population – indeed there were towns where they were in the majority. The classroom seems a testament to this Polish exceptionalism: five Jewish children growing up, playing, and learning side by side with five Polish children.

When Abram (Ben Eneman), the most visibly observant of the Jewish students (he wears both a yarmulke and tzitzit), announces that he is going to America, all of his classmates are excited for him. These kids have mingled so freely that exclamations like “mazel tov” and “l’chaim” can be heard on the lips of Catholic Poles. Yet, as with American exceptionalism, there are questions about whether it is descriptive or aspirational; whether it is robust enough to withstand challenges or whether it is a fragile construct. In 1935, when war hero Marshall Jozef Pilsudski dies, Heniek (Jonathan Compo) mockingly interrupts the commemoration with an anti-Semitic song mocking the leader, taught to him by his priest – in part because the coup Pilsudski had led had also repealed anti-Jewish legislation.

It is an inconvenient and often-forgotten fact of history that for the first 19 months of the Second World War, the Third Reich and the Soviet Union were allies in the dismemberment of Poland. While the Jews under Soviet control were in a considerably better state than their brethren to the west, their new masters were very willing to strategically use anti-Semitism to undermine any solidarity between the Poles and Jews.

A church hall is expropriated for a movie theater and Menachem (Benjamin Lillian) is put in charge. When the ever-opportunistic Zygmunt (Alex Prout) informs on classmate Rysiek (Colum Goebelbecker), it is Jakub Katz (Matias Litewka) the youthful intellectual (and recipient of Abram’s exuberant letters from America) who is framed for ratting him out.

Consequently, when the Molotov-Ribbentrop Pact is nullified in 1941, even after mass liquidation of Polish Jewry had already begun in the German-controlled west and the Reich was enslaving and deporting ethnic Poles, many in the east mistakenly perceived the Germans as liberators.

Though the Polish town Slobodzianek portrays is not Jedwabne, the pogrom he dramatizes follows similar contours, culminating in the rounding up of hundreds of the town’s Jews, subjecting them to public humiliation and sadistic attacks, and then herding them into a barn to be burned alive. Slobodzianek does not treat the violence as something abstract but as something personal – beatings, torture, sexual violence, and the culminating act of genocide are committed by friends and neighbors upon their friends and neighbors.

Slobodzianek does not let his country off lightly: the Germans did not force the Polish villagers to rape and murder; they gave license to atavisms cultivated by both the Catholic Church and Communist Party. That said, Slobodzianek also explores the simple heroism of Wladek (Charlie Trepany) who with little self-reflection hides his classmate Rachelka (Healy Knight) in his barn, and the far more cagey Zocha (ML Sparrow) who does the same for Menachem, even as his wife Dora (Nicole Albanese) and their child are left to their fates.

In the second act, Slobodzianek takes the class through the end of the war as those who remain alive (and do not flee to other lands) experience life under both the Communist Party and then, after the 1989 Revolution, the Third Polish Republic. Some spend the rest of their lives covering up the crimes of 1941, others seek to bear witness, or even seek retribution, while others seek to disappear under new names and identities.

The mood of Poland has changed since the 2010 staging of Our Class at Teatr Na Woli in Warsaw. A democratic nation that seemed willing to critically explore its recent past and promote reconciliation between Jewish and Polish people is now led by an illiberal nationalist government that recently amended the 1998 Act on the Institute on National Remembrance in such a manner as to suppress public discussion of Polish complicity in Nazi-era atrocities – the award-winning play is now condemned in some circles as anti-Polish.

Norman Allen’s adaptation of Slobodzianek’s original script (based on Catherine Grosvenor’s literal translation) is a rich text that spans from the lyricism of the songs the classmates sing to the epistolic voice of Abram’s letters, to the graphic descriptions of violence, to naturalistic dialogue and memoir-like addresses. Composer Eric Shimelonis’ musical contributions are likewise varied, from classroom songs to patriotic settings, to a mournful minor key melody over a chord progression that never resolves (all sung by the ensemble), to a solo niggun (a wordless prayer in Judaism) sung by Eneman.

Fight choreographer Joe Isenberg largely eschews any stylized abstraction but sculpts violence that is both brutal and viscerally personal in its violations, though often letting words make the final blow. Choreographer Emma Jaster has crafted a number of pieces, most memorably an evocative dance in those last moments under Soviet occupation when the friendships are still intact, and a mime performed by Sparrow, in which she portrays an abused horse who allegorically represents the Polish nation.

While this marks the world premiere of Allen’s adaptation, it is not the first time Director Derek Goldman has approached Our Class – he directed a different translation for Theater J in 2012 – and this familiarity is just as important as his artistry in managing a play that is epic in both sweep and length, while ensuring that the performances remain intimate. Indeed, it is a tribute to Georgetown University’s Theater and Performance Studies Program that their student actors are so capable of working with such challenging, emotionally-wrenching material that many professional companies with less lofty artistic aspirations would not touch. 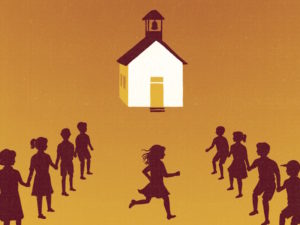 Our Class plays through November 17, 2018, at the Davis Performing Arts Center at Georgetown University, 37th and O Streets NW, Washington, DC 20007. Tickets are available at the venue or online.