Editor’s note: In Avant Bard’s production of Illyria, or What You Will—freely adapted from Shakespeare’s Twelfth Night by Jonelle Walker and Mitchell Hébert—the character of Cesario  (who falls in love with Orsino and is loved by Olivia), was reimagined as nonbinary. Here Ezra Tozian, the nonbinary actor who plays Cesario, shares their very personal feelings about the experience.


This has been an intense ride, y’all. What started off as one (still terrifying, but considered within my wheelhouse) role in Illyria has turned into a once-in-a-lifetime opportunity for me.

I didn’t get the role of Cesario the traditional way. Our original cast member needed to leave the production before rehearsals started, and I found myself facing two options: option one, the option I usually take, was to remain silent but supportive. I would offer to do my best to help find another nonbinary actor for the director and producer and stay in my already-cast lane. Option two, the really scary one, involved me asking for the role since I, too, was nonbinary. A role that I knew I wouldn’t normally be cast in since it was such a stretch for me as an actor and could very well end in failure. But I asked. And, to my surprise, everyone said yes.

And here I am. Fat body and all. Genderqueer, nonbinary, trans body, and all. Up on that stage, being loved for who I am with no conditions attached. I’m not fetishized. I’m not promised love once I lose 20 pounds. 30 pounds. 50 pounds. Nothing’s found wrong with my loves for finding me attractive and wanting to be with me, as is. There are no sidelong glances of pity for anyone involved.

It’s revolutionary for me to be in a space like that. It’s vital that audiences see bodies like mine in a space like that. That is how you start to change minds. By casting like this. By showing audiences how normal, how automatic, how understandable, how joyous it is to find someone like Cesario lovable—and, by association, how bodies like mine can be lovable. A body that has been deemed unlovable for as far back as my memory goes. And yet…here we are.

I would be remiss if I didn’t take a moment to acknowledge my privilege and its large contribution to this moment: I have an incredibly supportive mother and a long-term partner who have been there for me physically, emotionally, and financially. They, as well as a small but mighty community of friends, all stayed with me through my gender reveal, pronoun change, and name change because they love me and were smart enough to realize nothing about me had changed, but rather had been found. I’m white. I’m also the type of fat and trans body you can put onstage and have people accept fairly easily. My pronouns may confuse your brain, but my appearance does not. I may be fat, but I’m also the statistical average of the United States. Bodies like mine are seen everywhere except in entertainment, and while I’m thrilled that my body is now being showcased and accepted in this show, I know that could very well change with the next one.

I know that there are more bodies out there that need love and acceptance just as much as mine does. I hope we can acknowledge the joy of this moment and use it as fuel to keep moving in the right direction for future productions. And I hope any theater folks reading this consider the radical act of full diversity for their future productions. The amount of joy it brings is truly immeasurable.

We’re coming up on our final performances for Illyria. I’ve put everything I have into this character, into this show. I’ve learned so much from this experience. I can finally say that I fucking earned the shit out of this and I’m so fucking proud.

For those that have come to the show already, thank you for sharing this with me, with us. For those coming to our final weekend, I can’t wait to see you! 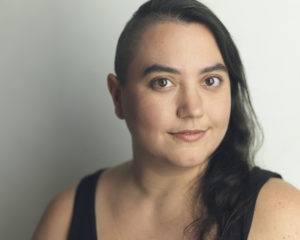 Ezra Tozian is a genderqueer, multidisciplinary artist rocking it out in Washington, DC. Some of their previous credits include Use All Available Doors (Pinky Swear Productions), The Trojan Women Project (Brave Spirits Theatre), Crave (Avalanche Theatre Company), and the first iteration of The Tarot Reading.

DC Metro Theater Arts enjoys showcasing the work of our diverse theater community. Have something you want to say? Contact us!