Can love really cut through red tape and conquer all even when there are stringent immigration rules? D.C.-area audiences will find out in Solas Nua’s upcoming production of How to Keep an Alien from Irish playwright Sonya Kelly. 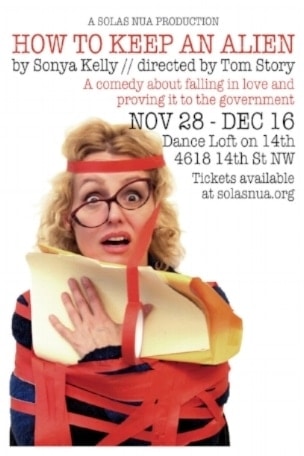 Now, what better place is there than Washington, DC for a comedy about taking on small-minded bureaucrats, the politicians behind them, and intricate immigration policy? How to Keep an Alien brings all of these elements to its D.C.-area premiere at Solas Nua on November 28.

Conjured by playwright Kelly, How to Keep an Alien has a real-life predicament as its starting point. Seems that Irish Sonya and Australian Kate meet and fall in love. But now Kate’s visa is up. She must leave the country unless a solution can be found. Together, Sonya and Kate must find a way to prove to the Department of Immigration that they have the right to live together in Ireland.

And to lawfully live together in Ireland requires a paper trail of evidence for the Immigration Department staff to approve a visa. The visa trek takes the two, and the audience, all over the world to gather the correct paperwork for a visa.

Solas Nua’s production of How to Keep an Alien by Sonya Kelly is directed by Tom Story, who is fresh off of directing this summer’s hit comedy, The Legend of Georgia McBride at Round House Theatre along with his recent comic performance at Shakespeare Theatre Company’s The Comedy of Errors.

How to Keep an Alien features Tonya Beckman in a rare small-cast stage performance. Beckman is seen on many DC area stages. She is a company member of Taffety Punk Theatre Company. Appearing with Beckman in Alien is Nick Fruit.

For Beckman, the opportunity is “something completely different.” As the Kelly script is written it is almost a solo performance. The play is “an inventive comedy; incredibly charming and wise,” said Beckman. “A comedy about love having no bounds. And we can all use a story about love conquering all in our lives.”

An interview with playwright Sonya Kelly provides much to know before seeing How to Keep an Alien. How To Keep An Alien premiered at Tiger Dublin Fringe in 2014, winning the Best Production Award. It has since toured across Ireland and to the UK, Australia, New York, and Finland.

David Siegel: What made you decide to use your real-life story as the material for a play?

Sonya Kelly: I was hugely influenced by the ‘Table Monologists’ like Spalding Gray, and nonfiction writers such as David Rakoff. I also did stand-up, which frustrated me because you have to cut all the sad bits out. The experience of having to prove the existence of a relationship to the state with hard copy evidence was a strange and surreal process. It changed me, opened my eyes to the broader immigration problems of the world, both presently and historically. In trying to get the person I loved to remain in the country, I found myself politicized by my immediate needs. The micro met the macro. I thought it would make an interesting dramatic narrative.

What do you hope audiences will take away from this story?

I hope they get a sense of context. We are all connected. We may try to make it look like a pyramid but it’s a circle. The world’s problems are everyone’s problems. I hope they laugh at the lunacy of the show and I hope they have a bit of a think also.

What are some of the immigration/naturalization challenges that Ireland faces?

We have a dreadful thing called Direct Provision. This holds asylum seekers sometimes for years in facilities with very little money, limited rights to work, a curfew, no cooking facilities. It’s inhumane and it needs to stop.

Any unique fun facts or interesting playwright bits you’d like to throw in? You know the show better than anyone so feel free to create your own Q&A category!

When the show premiered in Dublin’s Project Arts Centre, the run sold out after the first preview. Kate, who the show is about, was there at the opening but after that, couldn’t get a ticket for her own play. Good thing Hamilton isn’t around today!