Get ready for your jaw to drop, your eyes to open wide, and your mouth to be agape! Back on Broadway for the fourth year with a limited six-week engagement of an all-new touring production, The Illlusionists – Magic of the Holidays presents an astonishing array of dazzling, mindboggling, and breathtaking acts of prestidigitation for the whole family, including top entertainers familiar to TV audiences from the popular competition series America’s Got Talent. Featuring five of the world’s greatest performers of mentalism, sleight-of-hand, cutting-edge spectacle, close-up magic, and grand illusion (Colin Cloud, Chloé Crawford, Shin Lim, Darcy Oake, and Adam Trent), along with eye-popping dancing by guest artists Light Balance, the blockbuster show provides amazements and delights for all ages.

Directed and choreographed by Neil Dorward (as he has since the debut of the franchise at Australia’s Sydney Opera House in 2012), the fast-paced production presents the roster of stars in revolving sequences that combine illusory effects and legerdemain with engaging humor, video clips and virtual sets (video design by 4u2c), and audience participation. The live staging is magnified for greater visibility from the house with live-feed video (and maybe a few pre-recorded foolers, as skeptics would have you believe) on a large background screen and side monitors, and the magical mood is enhanced by Evan Jolly’s original music, dramatic lighting by Paul Smith, and costumes by Angela Aaron that accentuate the distinctive personalities and styles of the performers.

Each artist has a unique specialty in the genre, which makes for a well-rounded two hours of mesmerizing something-for-everyone amusement. Billed as “The Futurist,” Adam Trent, who inaugurated the Broadway runs of The Illusionists, serves as the Master of Ceremonies, amiably addressing the audience, cracking jokes, and keeping spirits high between the acts he introduces. He also exhibits the split-second timing and synchronization needed for moving back and forth between reality and virtual reality, in front of, between, and behind scrims and projection screens, as he interacts with himself, 2D and 3D props, and high-tech lighting effects in his futuristic segments. The same can be said of Light Balance, the high-energy Ukrainian dance troupe whose costumes and movements are illuminated by colorful neon and LED lights, which go on and off in perfect unison to a post-modern beat, to create surprising appearances and disappearances of the performers on the darkened stage.

More classic feats of magic are presented by Darcy Oake, who makes live doves appear out of a flaming feather and a motorcycle materialize behind a closed curtain, and Chloé Crawford, whose ingestion and removal of a number of sharp razor blades from her mouth and neck are more than “slightly disturbing” and completely inexplicable (my husband, who, I can assure you, was not a plant, but was selected by the audience to join her on stage, was a mere inches from her face and didn’t have a clue how she did it). Scotland’s Colin Cloud, “The Deductionist,” charms with his sharp wit and stuns with his ability to apply observation, statistics, and reasoning to penetrate the minds of volunteers from the audience. His uncanny revelations of their thoughts, discernment of who’s telling the truth and who’s lying, and prescient knowledge of choices they would make could make anyone a believer in the preternatural talent of mindreading. And the phenomenal Shin Lim, winner of the 2018 season of AGT, leaves no doubt that his million-dollar victory was well-deserved. His focus and precision are unsurpassed and his execution flawless, as he generates smoke and elicits gasps from the crowd with his astounding card tricks. No matter how attentively you watch, you won’t witness a gaffe in his world-class artistry.

Even if you are well-versed in the latest technology or familiar with some of the more traditional tricks, part of the fun is trying not to blink, to catch them in the act, or to figure out “how did they do that?” With this group, that’s not always easy; in some cases, it’s almost impossible. In addition to the full two-hour show, The Illusionists – Magic of the Holidays also offers a condensed 90-minute family-friendly matinee at 11 am on Saturdays and other select dates, so everyone can enjoy this exciting entertainment at an age-appropriate time. There is no reason for anyone who loves the thrills and mysteries of magic to miss it! 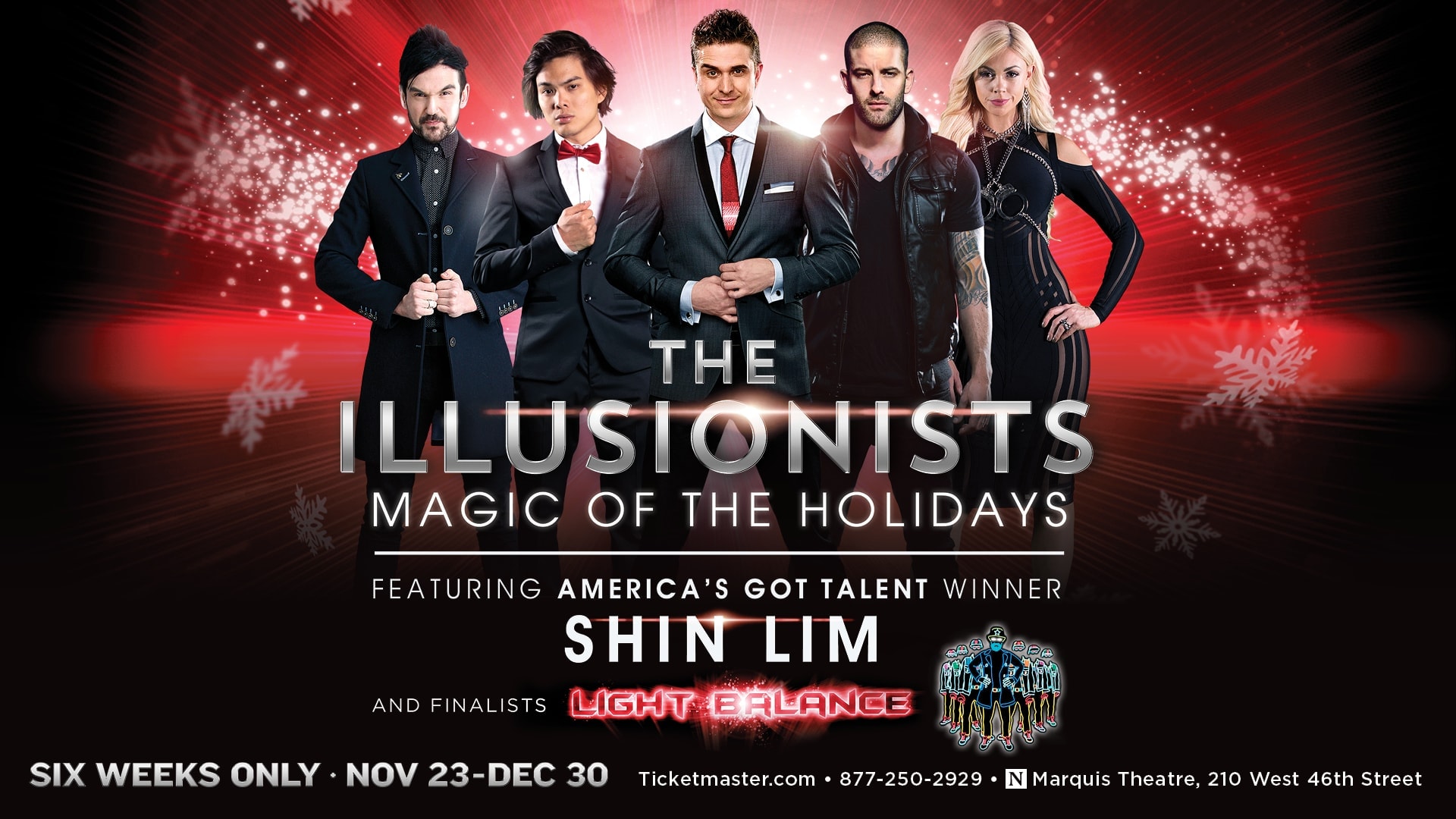